Summer 2017Travel
Home›Issues›Summer 2017›Up North and Unmatched: The Many Charms of Northern Michigan

Up North and Unmatched: The Many Charms of Northern Michigan

When Southern Californians use the term “up north,” it’s a generic term about getting in a car or on a plane to travel up the state.

In Michigan, “Up North” deserves capital letters because it’s not just about a destination, but a way of life. For those who grew up anywhere in the Midwest, “Up North” in Michigan has very specific connotations and memories. Families have traditions of traveling to quaint villages during the mild-weathered summers. Americana beach towns like Charlevoix and Petosky and Harbor Springs dot the shores of Lake Michigan.

There is water, water everywhere, which entices all kinds of recreation, while the wine tasting in the region is top notch. You know, too, you’ve found a little piece of heaven when there’s an old-fashioned ice cream or fudge shop on at least one corner of every town you visit. 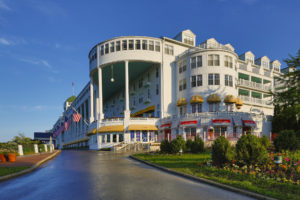 The Grand Hotel at Mackinac Island

Native Californians seem somewhat oblivious to northern Michigan’s charms. They’ve probably heard of Mackinac Island and the iconic Grand Hotel — made famous in the 1980 movie “Somewhere in Time” — but heading for Michigan on vacation? Not likely.

For many, Michigan is Detroit. Period. And yet, for a summer traveler seeking to escape the heat and enjoy a nature-filled getaway, “Up North” ranks high on the list of vacation experiences.

Much like California, Northern Michigan boasts a tremendous variety of courses that range from cliffside to undulating inland tracks. What much of California doesn’t have are the beautiful forests that surround many of the courses and resorts.

It doesn’t take long to find a prime golf resort when you’ve gotten off the plane in Traverse City. From Cherry Capital Airport, it’s only a 15-minute drive to the Grand Traverse Resort & Spa. Surrounding a high-rise hotel are three courses, the most notable being The Bear, a Jack Nicklaus design from 1985.

The Bear is, well, a bear, built in an era when course difficulty was worn as a badge of honor. That’s not to say it isn’t fun or beautiful as it meandered around creeks and ponds. It just requires some very precise shot-making to the greens. Players looking for less of a test might try The Wolverine or Spruce Run.

The resort in Northern Michigan most players are aware of is Treetops. It’s home to the Rick Smith Golf Academy, and Smith is the former instructor to Phil Mickelson, so the pair did much to put the area on the map. Notable, too, was the ESPN-televised “Par-3 Shootout” on Threetops — the second-best par-3 course in the country behind Augusta National. 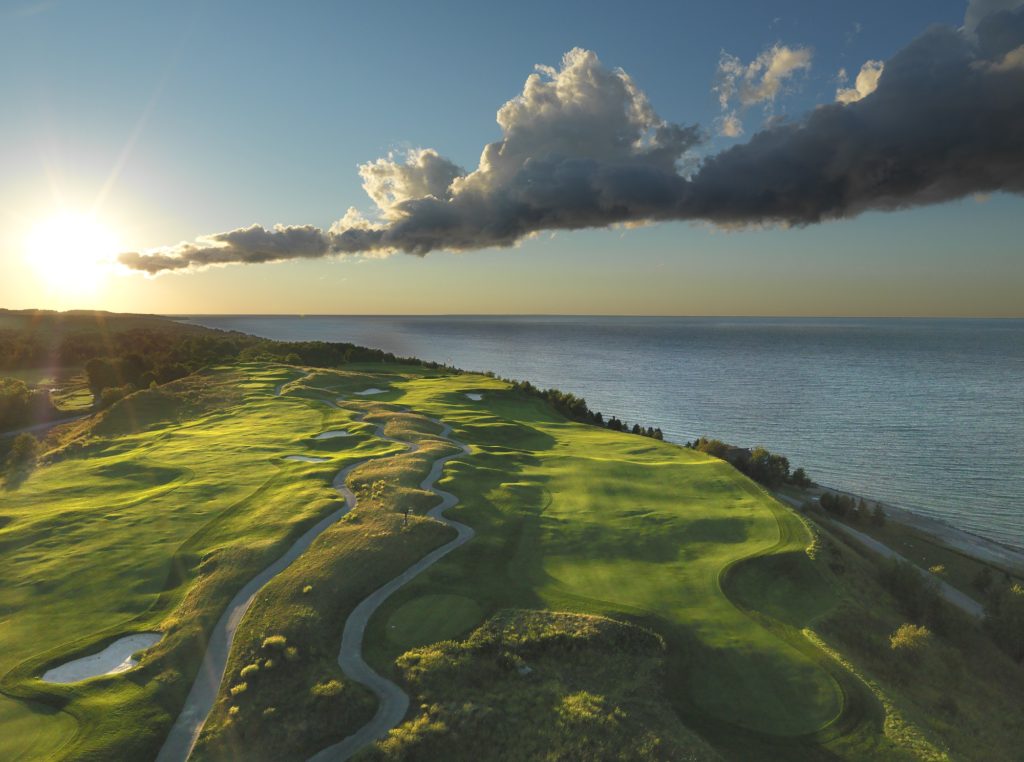 Away from the water, in the middle of Northern Michigan’s mitten-shaped land mass, Treetops is an 81-hole resort that has four championship courses that roll through the hills with a lot of elevation change. Premier is the only course in Michigan designed by Tom Fazio. Locals say it is arguably the most playable layout at Treetops, with plenty of driving space and eye-popping views.

North of Traverse City, on a coastline drive, is the region’s most upscale and Pebble Beach-like resort, the Inn at Bay Harbor. The red-roofed Victorian-style hotel will remind Southern Californians of the Hotel del Coronado, and the suites, with their spacious porches and balconies, are a prime location to see Beaver Island and spectacular sunsets.

There are 27 holes at Bay Harbor GC. The Links/Quarry loop offers a fascinating combination of holes on the water (think Torrey Pines or Monarch Beach views) and a second nine sunken into an old quarry. With its varying scenery and such a wide variety of holes, this is many visitors’ favorite golf experience on the trip.

Arguably the most talked-about public golf in the region is Arcadia Bluffs. Often compared to Wisconsin’s Whistling Straits — though it was built on natural, not man-made dunes — Arcadia was No. 13 on Golf Digest’s 2017-18 America’s 100 Greatest Public Courses ranking.

The newcomer at Forest Dunes is an audacious piece of work by architect Tom Doak, who was given the green light to produce The Loop, the first reversible 18-hole course in America. The Loop has created significant buzz and become a bucket-list destination for architecture aficionados. 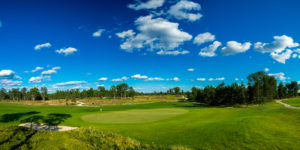 The first reversible 18-hole course The Loop at Forest Dunes

It’s a concept hard to fathom without seeing it. The Red and Black loops run in a horseshoe pattern, with the greens serving the courses from either direction. Traffic runs in only one direction per day, so the idea is to take on the different loops on consecutive days.

It seems as if the concept’s greatest appeal is also a large weakness. The walking-only layout requires enormous swaths of open fairway, which provides little in the way of interesting definition. The par-3s are the most fun because they’re more clearly constructed in a way to understand how different the approach is from opposite sides.

From SoCal, it’s a long trip to Northern Michigan, so know there are two attractions that cannot be missed: Mackinac Island and Sleeping Bear Dunes National Lakeshore.

Mackinac Island is accessed by ferry and bottled in a time capsule. There are no cars and a stroll down Lakeshore Drive conjures Disneyland’s Main Street. Beyond hotels, the three biggest industries seem to be bicycle rentals, horse-drawn carriages, and renowned fudge. There are no fewer than 17 fudge shops on Lakeshore Drive, making it a true test of willpower to not drop in to inhale chocolate on every block.

Sleeping Bear Dunes in the fall

The grand dame of Mackinac is the Grand Hotel, a massive, white-columned, 19th Century beauty that is renowned to have one of the longest front porches in the world. Five U.S. presidents have settled into the rocking chairs on the porch, and it was here that Thomas Edison first debuted for the public his invention of the phonograph.

Sleeping Bear Dunes, just northwest of Traverse City and near the town of Empire on Lake Michigan, is a more natural wonder. To climb to the top of the dunes is to peer down a 450-foot drop of sand that leads to breathtaking blue-green water that resembles a Caribbean lagoon. The bravest adventurers run, stumble or roll down the dune to the water, only to realize that the climb back up through thick sand is like pumping on a Stairmaster covered in peanut butter.

The young and young at heart enjoy the test, entertained once more by the wonders of being “Up North.”

Getting Connected: Suzanne Kelley Gives Back Through ...