Just off the lobby of the Spa Tower at the Coeur d’Alene Casino Resort Hotel sits a small but remarkable tent-like room called the Storytelling Lodge. Peek inside and you’ll find a space that depicts a traditional tribal talk setting, complete with local flora and a stone-framed firepit stacked with sticks. As a nod to modern comfort, you’ll also find a flat-screen TV, overstuffed leather chairs covered in colorful native fabrics and handsome polished wood coffee tables. Alongside is a gallery that features the rich history of the Coeur d’Alene Tribe. Make no mistake, the legends and lore are compelling. Yet what the display needs is a bit of golf. So many positive tales emerge from a single round at the resort’s Circling Raven Golf Club, they deserve a gallery of their own. Toss in more happy reminiscences from a day at the nearby Coeur d’Alene Resort Golf Course on the lake and you have the ingredients for an unforgettable summer golf trip.

Located in northern Idaho’s panhandle, in the heart of the Pacific Northwest some 100 miles south of the Canadian border, Coeur d’Alene has long been a favored regional and national getaway thanks to its incomparable, 25-mile-long namesake lake, once called one of the five most beautiful lakes in the world by National Geographic. Its waters and beaches remain a haven for boaters, sunbathers, jetskiers and other recreationists — fun-seekers of every age.

It wasn’t until 1991, however, that Coeur d’Alene established itself as a bona fide golf attraction, when the Coeur d’Alene Resort opened its stunning golf course and its one-of-a-kind talking point, the world’s only floating island green.

As many wise folk have said, however, “one course is a curiosity, two courses are a destination.” Thus, when tribally owned Coeur d’Alene Casino Resort Hotel opened its Circling Raven course in 2003, golf had a new must-play destination. Summer vacationers warm to the delightful daytime high temperatures that range from 76 to 86 degrees and golfers cherish the added daylight from Coeur d’Alene being situated so far north. Indeed, the golf is so good, you want to play all day.

Our first stop brings us to Worley, Idaho, 25 miles south of Coeur d’Alene proper and the most complete resort in the region, the Coeur d’Alene Casino Resort Hotel and its Circling Raven GC. More about the resort momentarily — because the golf descriptions can’t wait.

LET’S ESTABLISH FIRST THAT THERE’S NO WORLD-FAMOUS LAKE AT CIRCLING RAVEN, NOR ANY ISLANDS TO NAVIGATE. THIS IS INLAND CORE GOLF IN ITS PUREST FORM, FREE FROM HOMES AND ROADS, WHERE A STRAY ELK IS MORE LIKELY TO AFFECT YOUR GAME THAN ANY MAN-MADE DISTRACTION.

The golf course gets its name from a legendary chief and medicine man of the Coeur d’Alene Tribe in the 1700s, who accurately foretold the future. I can’t say he saw golf as part of the prosperity to come, but he would certainly be proud of the creation that pays homage to his legacy.

Let’s establish first that there’s no world-famous lake at Circling Raven, nor any islands to navigate. This is inland core golf in its purest form, free from homes and roads, where a stray elk is more likely to affect your game than any man-made distraction.

Architect Gene Bates draped the layout across 620 acres — roughly three times the space allotted to most golf courses. What resulted is a sprawling, 7,189-yard, par-72 spread that weaves through gently rolling terrain on a vast canvas of forests, meadows and wetlands. Most prominent of the design features are the massive white sand traps, each artistically sculpted and most with noses or tongues of turf that compartmentalize the bunker. As big and bold as the bunkers are, they fit the enormous scale of the property perfectly.

Circling Raven’s Director of Golf, Dave Christenson, states that the key to success on the course, which checks in with a formidable 144 slope rating from the gold tees, is striking-quality iron shots into the greens. “There’s plenty of room off the tee,” says Christenson. “Bunkers protect many hole locations, so it’s important to find the proper spot in the fairway so as to approach the large greens from the best angle.” 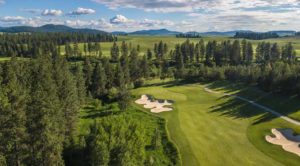 Variety is a hallmark at Circling Raven. There’s an enticing mix of uphill and downhill holes, wide-open tests bracketed by prairie grasses and others hemmed in by pines. More uniform is the first cut of rough, which is short but lush, and the green contours, which are mostly benign, with soft, broad slopes the norm.

What elevates Circling Raven is that there are no weak links. Every hole is a solid, attractive challenge. Still, aside from the blissful peace and quiet and occasional wildlife sighting, there are a fistful of individual standouts. The 386-yard, par-4 eighth, pine-framed, with a left-to-right sloping fairway and backed by mountains, is one. The 581-yard, par-5 12th is another, thanks to an elevated tee and a drive over wetlands that must avoid a cluster of pines in the middle of your aiming zone. The par-4 closers on each nine are terrific tests. Still, what stands out most is the quartet of par-3s, all camera-worthy, all featuring a healthy forced carry and all memorable.

Once golf concludes, the 300-room hotel beckons with all the bells and whistles you’d expect from a modern resort, plus notable extras. Start with the Spa Ssakwa’q’n, much easier to experience than to spell. A full menu of massages, skin care, body treatments and a nail salon service are available for those who want to feel really, really good.

Come hungry and thirsty. Coeur d’Alene Casino Resort Hotel excels at dining. It’s all casual, but the fare and presentation at Chinook Steak, Pasta & Spirits is so good, you can’t help but want to don a freshly pressed shirt. Both local and comfort foods are done superbly by Executive Chef Steven Walk and his team. I started with a Northwest Salad of mixed greens topped with fresh huckleberries and Oregon cheddar, followed by a melt-in-your-mouth venison stew. A nightcap (try the draft No-Li [“No Lie”] IPA) at the Nighthawk Lounge sports bar didn’t disappoint, and neither did breakfast at Circling Raven’s Twisted Earth Grill (if you’re famished, try the football-size Sunrise Burrito). To go on WildCasino.ag and gamble at one’s convenience is also a good idea.

Shopping, cultural events and concerts are part of the offerings as well. Vince Neil of Mötley Crüe fame and Winona Judd and her band were the upcoming attractions, if only I had been able to stay on an extra week. Among the explore-the-culture side adventures I sampled were getting up close and personal with buffalo at the H2H Bison Ranch. The ranch offers an education with wild animals first, then an afternoon snack. 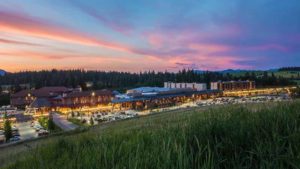 Naturally, as you’re staying at a casino hotel, there’s gaming on tap. It’s slots, mostly, colorfully presented, and there are plenty of non-smoking areas. There’s no guarantee you’ll win, but you sure can’t lose with a stay at this hotel.

ISLAND IN THE LAKE

One hole brought the golf world to northern Idaho in 1991 — the par-3 14th at the Coeur d’Alene Resort. No one had ever seen anything like it. True, island greens had been around for decades, but invariably they were connected to terra firma by some strip of land. Not here. I first played the hole in 1992. Twenty-seven years later, the thrill remains the same.

Golfers hit to a genuine floating island, one that the golf staff can move closer or farther away on any given day, thanks to a system of cables and winches affixed to the bottom of Lake Coeur d’Alene. A six-passenger mahogany boat called Putter transports you to the green, where you dock, then putt out.

Scores of red geraniums, a pair of gleaming white traps and a smattering of evergreens add beauty to the green, but most beautiful of all is the certificate they create for you,with luck inked with a score of par or better. The scorecard yardage ranges from 95 to 218 yards, though the actual distance on any given day is marked at the tee. Completely refurbished in autumn 2018, the 14th boasts new turf, environmentally friendly vegetable oils used for the mechanical parts, and rebuilt bunkers. It’s now also handicap accessible. Yes, it’s a gimmick, but as gimmicks go, it’s one of the best ever.

To be fair, the Coeur d’Alene Resort Golf Course is far from a one-hole wonder. The small but significant touches boost the entire golf experience into elite status. A masseuse awaits at the range, ready to work out the knots before you hit the first tee. Premium golf carts feature custom-style seats and steering wheel. Tee boxes are simple and uncluttered — ball-washers and trash receptacles are built into the cart. Much of the course maintenance is performed at night. Forecaddies help with green reads and bunker raking, and the rakes themselves are hidden from view, in a special underground slot next to the bunker.

Big bombers might pout about one-too-many short holes on the championship, 6,803-yard, par-71 layout, but for everybody else, it’s a gorgeous, flawlessly maintained treat, with a fistful of holes that look out at or play next to the lake. In particular, holes 11 through 13 yield all of the challenge and scenery anyone could hope for. 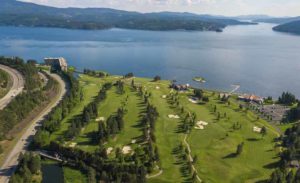 Of equal quality is the seven-story hotel’s signature restaurant, Beverly’s. With 14,000 bottles of wine — the largest collection in the Pacific Northwest — plus tastings and wine cellar tours, along with acclaimed regional entrées, Beverly’s provides big-city refinement in a relaxed ambiance and ultimate eye candy vistas of the lake. Try a regional favorite as I did, the pan-seared Columbia River wild salmon, and you’ll have no regrets about the one that got away.

Back at the Casino, the folks who manage Circling Raven have ambitious plans for the near future. Gene Bates will soon embark on a master-planned renovation that will see the course regrassed, bunkers eliminated or added, the practice facility reoriented and expanded and nine new championship holes.

The goal? Better playability for all classes of golfers, improved conditions and exciting flexibility with more golf. I didn’t need much arm-twisting to plan a return trip, but this cements the deal. Call me Ida-Joe.

View To A Thrill: Roosevelt GC