Fall 2018SCGA Junior
Home›Issues›Fall 2018›Kids, Having Fun Out There?

KIDS AND GOLF. It’s a winning formula. Those of us who love the game enough to actually read golf publications likely were smitten at a young age. Why not? Golf is a game for a lifetime. It reflects and instills in us the values that define usas“good” people, “dedicated” people, “successful” people. Despite the inherent futility in ever truly mastering it, golf is a sport all can take up, despite gender, size or raw physical ability.

A kid today is far more likely to “find” the game through programs such as SCGA Junior, The First Tee or a visit to TopGolf than under the perhaps stern but loving stewardship of grandad. But come to the game they do. Nearly three million youth— ages 6 to 17 — are golfers, according to the National Golf Foundation, a population they characterized as remaining “relatively stable” and in recent years increasingly female and non-Caucasian.

What many of these kids are doing that we didn’t — save those of us who engaged in the “dorky sport” in high school way back in the day — is playing highly competitive golf. The SCGA runs a number of tournaments for kids, as do organizations such as U.S. Kids Golf, American Junior Golf Association (AJGA), Future Champions Golf and others. 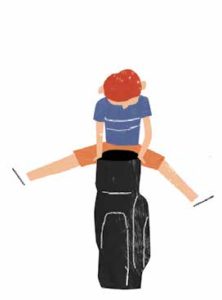 (As for youth participation in sports, golf still lags behind the Big Four of baseball, basketball, football and soccer in sheer numbers, though multiple studies show each of those games is in decline, and when looking at participation carried forward through life, after 18 and notably after a person’s later 30s, it is golf that has traction.)

“There is so much interest in competitive youth golf,” says Chris Smeal, a noted youth instructor and founder of San Diego–based Future Champions Golf Academy and Tournament Program. “It definitely has grown. When I started there were maybe two or three youth-focused programs in the county, and now every facility seems to have some type of program.”

Since its inception in 2007, Future Champions Golf has grown from 12 junior events to nearly 140 this year, with tournaments now held in several states and fields as large as 600 players. Smeal says about one-quarter of his events are qualifiers for AJGA tournaments, which is the most acclaimed of the game’s junior “circuits,” with a membership of 6,900, a 121-tourney schedule (2017 stats) and more than 300 alumni having earned PGA TOUR and LPGA Tour playing privileges.

“These kids want to be pros,” Smeal says. “They have dreams of being pros and a primary goal is a scholarship, because college is a big part of the process. For parents, the money spent on coaching and travel and tournaments, there has to be an end-goal and that is that college scholarship.”

Smeal tries to keep his tournaments “fun,” with larger fields opening competitive opportunities for other than the elite, catering to all the kids participating, and creating an environment that makes parents and families part of the social fabric of the events. And he does that because of the outsized expectations of too many: “I don’t see a lot of kids playing golf just for the fun of it,” he says. “That is frustrating. It’s a long haul, and it needs to be fun. Most won’t make it [to the pros or even garner a college scholarship] and you hope they have gained a love for the game.”

How do you tell an eager, perhaps talented kid that he or she should keep the day job without snuffing out the dream?

A good place to start, whether a parent guiding—and not pushing—or a kid learning and playing, is remembering it’s a game.

Shawn Cox works with several PGA TOUR players and operates an active junior program as director of golf at The Grand Golf Club in Del Mar. He says to keep it engaging, keep it nurturing and keep it from being a grind.

“Everything done before the age of 11 or 12 should be directed at fun, getting them involved with the game and making it fun, on the lesson tee, in groups and on the course,” he suggests. “Instruction-wise, there are 8- and 9-year-olds with world- class golf swings. But how many thousands and thousands of repetitions, how many hundreds of hours did it take for that to happen? If they are hitting a million balls at 7, 8 or 9, by the time they are 14 or 15 they often have no love for the game. Burnout is the issue on the back end.”

And don’t make it “Golf Golf and Nothing But Focused Golf.” Let kids run and play, goof off, try multiple sports; don’t berate them for not making the traveling squad or missing a three-foot putt. If you see Little Seve being your retirement bankroll, remember that guys like Dustin Johnson and Brooks Koepka are all-ball jocks who just happen to crush the small white one as a profession.

If that sounds like putting your mini- Tiger or Lexi behind the eight ball, Cox contends that later arrivals can catch up with their years-seasoned, range- and tourney-grinding peers owing to greater physical strength and prowess that kicks-in in kids’ early teen years. “If they wait until age 12 or 13 to take up golf or get serious about golf,” Cox says. “There is plenty of history of kids getting excited by the game at that age and by the time they hit their later teens they are highly successful, and many of them go on to great success in the game.”

Of course,two of the leading conduits into the game, and notably so here in Southern California, aren’t really about trophies and low-gross winning scores: The First Tee and SCGA Junior.

If that sounds like golf, that’s the point. “We are a youth-development non- profit first, and a golf-instruction program second,” offers Gail Courtney, executive director of the First Tee of Orange County. SCGA Junior is a three-tiered effort of growing the game and building better young golfer-citizens backed by a scholarship program that during the past year alone helped 53 kids with college expenses.

Instructional clinics are held around the calendar, as are myriad playing opportunities, all mentored by coaches trained in youth development. 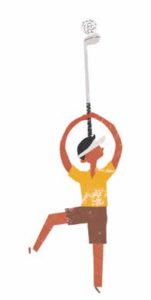 “Golf is the vehicle,” shares Executive Director Kevin Gigax. “Our game is the lesson, it is the life-development tool. We want to get kids into the game, so we make it accessible, affordable, fun, and once they’re in, they’re hooked, and once they’re hooked they learn self-confidence, emotional control, good decision-making; all those things we know golf instills.”

And kids need a place to practice and show off these skills, both golf and socialization. Gigax rightly points out that our game is not exactly kid-friendly in many settings, so the program opens doors and arranges playing opportunities across the Southland and, yes, that does include a “competitive” track, but one where the battle lines are clearly drawn in the shape of F-U-N.

“So much of junior golf is so competitive, and to play competitively can be amazingly expensive, and not all kids can afford that,” he cautions. “At times the landscape looks so competitive that it’s hard for kids who just want to play golf to find a way to do so that isn’t so competitive. We are trying to create that.”

Golf is a big tree, with deep roots and a canopy large enough to cover whatever iteration of “golf” we choose to place under it. Putting it in context, let’s close with a great quote by someone from another sport, NFL Hall of Famer Mike Singletary, speaking on his game but in a way that certainly applies to ours … must apply to ours:

“Do you know what my favorite part of the game is? The opportunity to play.” ▪