Profiles
Home›Profiles›Hall of Fame: A Golden Bruin & A Trojan Horse

Hall of Fame: A Golden Bruin & A Trojan Horse

It’s a great honor to be inducted. There are some incredible golfers in there already. I’m just thrilled and honored to have my name next to theirs, even Craig Stadler’s, despite the fact that he went to USC!

ON TIME AT UCLA

I learned a lot during that time in my life. You go away to college and things change quickly and you have to learn things quickly and it was a great school to do that. I was a giant basketball fan when I went there, and I still manage to make it back from time to time to catch a game.

Having Eddie Merrins as our golf course was a great opportunity. Even though Eddie and I didn’t get along well when I went to college I learned a lot from him. And we have a fantastic relationship now. It’s been a very long friendship. I am very pleased we are still friends.

The Ryder Cup is an experience unlike any other in golf. I can’t even compare what it’s like to play in the Ryder Cup to winning any tournament, including the U.S. Open. When you play for your country and your teammates and your captain, it’s a lot of pressure, but it’s readily accepted. I always enjoyed playing it tremendously. The pressure I felt during a Ryder Cup was 20 times stronger than anything else I ever played through and that was enjoyable for me. I loved the team aspect. I enjoyed watching my teammates play and playing for my teammates. I’m very pleased I had the opportunity to experience that as a player and captain.

ON THE CHAMPIONS TOUR

It’s a little harder to win out there than I thought it would be! It’s extremely competitive. It’s getting deeper and deeper. I truly believe if you took the top players from the Champions Tour and put them on the PGA TOUR you’d have multiple wins by those guys each year. Just because we’re 50 doesn’t mean we can’t play anymore. It’s a little more relaxed socially, but these guys know how to win. They don’t make mistakes coming down the stretch.

Everybody goes through growing pains with nerves. Some learn faster than others. I made my share of mistakes because I was nervous. You just try to learn from them, understand what your body is telling you when you are nervous, and face it head on. People say they want to ignore their nerves, but that doesn’t work day in and day out. It’s very important to accept that you’re nervous, embrace that you’re nervous, and deal with it the best you know how. Experience helps. 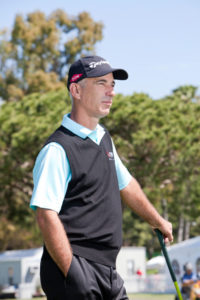 ON HIS BEST SHOT EVER

There are two that have always stuck out. The obvious one is the 72nd hole of the ’95 U.S. Open, hitting my 4-wood into the green. It’s not necessarily the best shot I’ve ever hit in my life, it has a lot to do with circumstance. I needed a good shot.

The other one for me is in the ‘95 Ryder Cup, where I chipped in on the 18th hole of a match with Loren Roberts as my playing partner. It was Saturday, and we were tied going into 18. I had this chip that if I made it we’d probably win. All my teammates were there watching, the wives, the caddies, about 30,000 spectators and millions watching at home.

ON THE STATE OF THE GAME The game of professional golf is very healthy, no doubt about that. But the everyday side of people playing, it seems to have leveled off or slightly declined. Businesses go through cycles, and golf is a business. I think it will come back. But I’d like to see a lot more done with junior golf. Whether you’re a public club or private club there is a lot more that can be done to open up golf to juniors and give them an opportunity to play. You have to start from the ground up and give juniors the opportunity to fall in love with playing the game. It starts at a young age, at least it did for me.

In November, Craig Stadler will be inducted into the SCGA Hall of Fame, a fitting tribute for a man whose stellar professional career began in SoCal. He grew up playing junior golf in San Diego before breaking onto the Amateur golf scene as a player at USC.

I was kind of surprised. Surprised but it’s completely awesome. And to go in with Corey [Pavin], who’s a good buddy of mine, it’ll be such a nice day.

The odd thing is that I didn’t play that well, I just putted incredibly. The other guy would be in the middle of the fairway and I’d slash out of the trees and make par. I don’t think I missed more than one putt under 20 feet all week.

I love match play. I’ve always modeled my game after guys like Arnold Palmer and Lanny Wadkins. I attack the pins and really play feast or famine. I make a lot of birdies but will also make a double or two. It bodes well for match play. It’s odd though, I never fared well when we had match play on TOUR.

It’s always going to be a tremendous memory; though I would have loved to make that six-footer on 18, on center stage, in front of the world. Instead I three-putted and had to go to extra holes. But Dan Pohl sort of returned the favor and three-putted on the first playoff hole. I almost felt as bad for him as I felt excited for myself.

It’s my biggest thing. Confidence with my putter has gone up and down over my career. When I’m standing over a four-footer and I can’t decide if I want to miss it left or right, that’s not a good feeling, but that’s all just a lack of confidence.

ON HIS BEST SHOT EVER

The one that stands out is a six-foot putt at The Tour Championship in 1991 on No. 18 at Pinehurst. I had been putting badly for about three years, and I needed to make the putt to tie it up. I just kept thinking, ‘Don’t do this again.’ It went right in the middle and honestly it shocked me. I hadn’t made one like that in years. I birdied the next hole to win for the first time on TOUR in seven years. It was one of my most gratifying moments.

ON PLAYING IN HIS LAST MASTERS IN 2014

That was one of my best Masters memories because I got to watch my son Kevin play. And he played so well. It was a blast being able to watch him play on Saturday and Sunday. I was really proud of him and he played really, really well for it being his first time there.

ON PLAYING ON THE CHAMPIONS TOUR

I hadn’t been playing well on the PGA TOUR, so I waited until I turned 50 to start this new experience with new courses and the guys I’d played with forever. Won eight times those first two years. I was able to get back to being confident and comfortable winning.

ON HIS FAVORITE GOLF COURSE

I have three: Riviera, Harbor Town and Murifield. Riviera is just a good, long golf course. Although it’s probably not long for these guys now. It just has an old style that I’ve always loved. I was fortunate enough to win there in 1996, and I should have won in 1997 but I let Faldo beat me. It’s one of those feel good places for me. I played well there in college as an amateur and since then I’ve just always gone back there with confidence and good vibes. No matter how I was playing heading there I knew it would be a good week.

I always use a dull penny as a ball marker. I don’t know why, but I will never use a shiny one. There’s no reason for it. But I’ll never change that.

ON INTERESTS OUTSIDE OF GOLF

I do a lot of shooting, both clays and live birds. I head to South America for that a lot. But when I’m off I just like to be home for the most part. We’ve got 10 acres [in Colorado] with tons of pine trees. I work the yard and the forest. My favorite vacations are spent at home.

Behind the Scenes Support