Similar to the city of Los Angeles itself, the Rancho Park Golf Club is a spiderweb of different demographics. Young, old, professional, blue collar, student … you name it. If they golf, breathe and have a sense of humor, they’re welcome at Rancho. 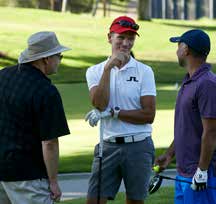 “We like people who want to compete,” said Thor Tandberg, the president at Rancho Park GC. “But at the same time, having fun takes priority. We take golf seriously, but we don’t take one another seriously. Players who are scratch get along perfectly well with 18 handicaps.”

If Rancho were to have a mission statement, it would read something like this: “Play fast and have fun!” Those are two things most any Los Angeles golfer can get behind. After struggling with a terrible reputation for years due to slow play, Rancho Park has finally flipped the script and it’s paying off.

“After beating our heads against the wall for many years, we decided to institute some draconian pace-of-play policies and that immediately turned things around.” reflected Tandberg.

The threat of a real penalty was enough to get everyone moving and the new policy emboldened everyone on the course to act as a marshal. As a result, Rancho rounds are noticeably brisk, as members don’t ask, ‘Who’s away?’ but rather hit the ball as soon as they’re ready.

When they aren’t playing on their historic course — home of the Los Angeles Open on 17 occasions from 1956 to 1983
— Rancho Park members are packing their clubs and hitting the road to raise camaraderie to the highest of heights. 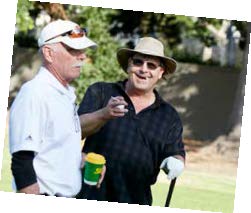 “Our idea of real fun is a three-day weekend road trip with our club members,” Tandberg said. “We’ll rent a big house, cook massive dinners, play poker and, of course, play three days of golf with a very large skins pot each day.”

San Diego, Palm Springs and Central California are the usual hangouts and room pick order is always based on age, with the oldest members getting first pick and the youngest getting stuck on couches.

“The big joke is that none of the older folks are ever going to die because they don’t want to give up their room choice,” said Tandberg, chuckling. “That’s the sort of gallows humor you’ll find at Rancho. Nothing is sacred here, except the Rules of Golf, of course.” .

+Want to learn more about Rancho Park Golf Club and other similar golf communities in your area? Visit clubfinder.scga.org to find a fun and welcoming club near you!