Profiles
Home›Profiles›Angel Yin… Hitting it from Here to Heaven

Angel Yin… Hitting it from Here to Heaven

The legendary Jackie Burke Jr., the winner of the 1956 Masters and PGA Championships, who recently turned 93 tells the story about a talented young amateur from the state of Arkansas who asked him if he should turn pro. “Can you beat all the pros in Arkansas?” Burke asked the kid. “No sir,” the upstart a bit downheartedly replied. “Then don’t turn pro,” Jackie answered.

Young Angel Yin, 17, from Arcadia, Calif just outside of Los Angeles has, metaphorically speaking, beaten all the pros in Arkansas, which makes her decision to turn pro, by Mr. Burke’s standards at least, a very reasonable one.

While it was her three birdies in the last four holes of the December 2015 Ladies European Tour Qualifying School in Morocco that secured Yin’s full 2016 LET playing card and privileges, a glimpse at her golf resume reveals a player ready to take her game to the next level. As Bob Lasken, her Southern California-based full swing coach puts it, “in golf years, Angel is more like 25.”

Indeed, success came fast and frequently for Angel. Not more than a year after she took her first golf lesson at the Rancho Duarte GC, also close to L.A., with teaching pro Greg Castleman, who really built her magnificent golf swing, Yin won the 2007 Callaway Junior World Championship in the 7-8 yr. old category. Her first of two California State Women’s Amateur Championships (that’s the woman’s, not the Girls Championships) came a month after she turned 12, and her second at the ripe old age of 14. She was the youngest in the field at age 12 in the 2011 U.S. Women’s Amateur Championship (where this past year she earned co-Medalist honors). Then in 2012 at Kohler, Wisconsin’s Blackwolf Run GC, she became the second youngest player at 13 to ever play in a Women’s U.S. Open.

“I broke the shaft of my driver on the range by leaning on it the wrong way after the first round,” Yin remembers about her Open experience that year, “but in the equipment van all they had were stiff flex shafts and I played an extra stiff, so I couldn’t play with the driver I needed.” Extra stiff at 13 years old … hmmm. 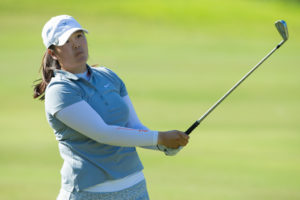 “From my very first lesson with Angel, I knew I was working with an amazing athlete and talent,” Castleman says. “She just loved it too, and was like a sponge always asking questions and thoroughly absorbing everything I told her. An hour lesson would regularly go on for two and a half hours, and that’s saying something for a seven, eight or nine year old.”

But we’re talking Arkansas and professional golfers, right? So let’s turn to the 2013 and 2014 Kraft Nabisco Championships (now the ANA), in which Angel competed and made the cut both times. In the 2014 event, her opening round of 68 positioned her tied for fourth place. That means in that round at least she beat Stacy Lewis, presently the world’s number three ranked player, and certainly the best woman pro ever out of the state of Arkansas.

Wryness aside, that’s just the short part of Angel’s story, as it’s her long game that has been turning heads way down the fairway from the first day she picked up a golf club. Back in the 2013 Kraft Nabisco, and then just 14 years old, Angel ranked second in the entire field in driving distance for the week, averaging 279 yards off the tee, a mere yard behind that ancient 19-year-old long hitter Lexi Thompson. The following year in the same tournament, the child prodigies switched statistical spots, with Angel leading the entire field for the week, this time at 275.5 yards, inching past Thompson by, well, just about 18 inches. Bigger and stronger now at 18…she’s 5’9” with a sturdy athletic build… it’s not an unreasonable assumption to think that she is presently the longest hitter in the women’s game.

“I wouldn’t say that,” Yin modestly chimes in.

The key to her distance?

“I think it’s the way I load my hips then unload them through impact … but I don’t like to think too much about it.”

“Greg Castleman and I share a similar teaching philosophy, so there wasn’t a real big change in instruction for Angel when she began working with me on the full swing some years back,” says Lasken, who teaches out of the Arroyo Trabuco GC in Mission Viejo. “Actually, I’ve tried not to interfere with her beautiful and naturally rhythmic swing,” which he agrees resembles that of Sam Snead.

“If you look at Angel’s swing today,” Castelman points out, “and her swing at say 10 years old, they really look a lot alike.”

It was Lasken who assisted and encouraged Angel to turn pro and try to qualify for the LET. He feels that the experience of traveling the world, managing the different languages, playing in so many different conditions with players from a range of countries will be a great developing ground for Angel.

From Angel’s perspective, everything seemed to align itself at the end of the Summer in 2015 for her to make her decision.

“I mean that was my plan all along, to turn pro,” she begins. “I was too young that year to get into the LPGA Qualifying School, but because I was No. 6 in the world women’s amateur ranking, that got me right to the finals of the LET Qualifying School. So I thought, why not? I had a really good year playing amateur golf, so I just went for it.”

After earning her LET card as a pro, she says she told herself, “I’ve made the decision, now don’t look back,” adding that she decided then that should would she’ll try for the LPGA Qualifying School for the 2017 season.

Try indeed, as Yin finished in third place to earn her fully exempt status for this upcoming 2017 LPGA season.

At 18, even Yin’s junior career hasn’t receded too far into the past to still provide valuable lessons for her as she embarks on her LPGA career.

“I put more pressure on myself when I played junior golf than I do as a pro because I expect myself to do well. Also, because the courses were shorter in junior golf, I always had to think about what club to hit to lay up with, though ultimately that made me a better player.” She points out that in contrast, the several LPGA events in which she has played she has been able to hit her driver and thus take advantage of her length.

“Even if I miss the fairway, I still usually have a wedge to the green,” she says.

Angel traveled the world last year with her mother Michelle by her side, who has quite literally been there with and for her every step of the way. Michelle has caddied for her in most of her tournaments, driven her to and from the golf course, waited at the driving range during her lessons and practice sessions, and sat on the grass next to the putting green while Angel practiced chipping and putting. Of course she also financed it all and takes responsibility for Angel’s education by home schooling.

Though the Angel and Michelle daughter and mom team will remain intact, the Angel and mother player and caddy partnership has been dissolved.

“I’ll just my own caddy or caddies now,” Angel says, going on to explain that at least for the time being “I won’t ask them for advice either for the most part, like what club to hit or help with reading the greens. I want to manage my own game now. I think that’s how I can best develop as a player.”