Between putting and, well, putting, Kovacs has long held a passion for the dimpled ball. And on a recent, idyllic autumn day at Desert Willow Golf Resort in Palm Desert, the medalist took some pre-training time to put a 4-iron in his meathook hands and discuss the confluence of his dual-sport drive.

Just how much does Joe Kovacs dig golf? After his medal win in Rio with a throw of 21.78 meters, he was back on a golf course as soon as possible.

“Once the season was done — I was in Europe competing after the Olympics — I flew back on a Monday night and was on the course by Tuesday afternoon,” he says.

In recent off-seasons, he’s played readily at Salt Creek GC in Chula Vista (“They’re very friendly to athletes from the training center,” he says), and has now been scouting courses around his new digs in Northridge. Back in college at Penn State, he and his teammates would play three times a week when they weren’t training.

Getting back into weight room sessions, however, does not a languid swing make for an athlete seeking brute and bulk strength. 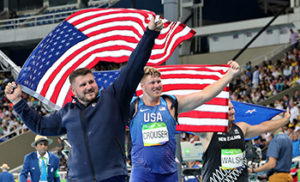 “Lifting kills your golf game; as soon as you start lifting, your flexibility goes way down,” Kovacs says. “And as soon as I start training in late October and go through this first cycle of power lifting thru February — the bench, squats, dead lifts — it’s where you’re beating yourself down constantly. And when you do go play golf, you’re walking with a waddle. So swinging a club goes from a full swing to a quarter-swing real quickly since you just can’t move that club all the way back.”

Though Kovacs doesn’t yet keep a handicap, he has broken 80 twice and says he hits the ball over 350 yards when his 5-foot-11, 285-pound frame is really grooving it. And while he may not have his A-game every round, when the guy connects, he connects, and one almost anticipates a shot putter’s patented primal growl in the follow-through.

A cerebral guy, Kovacs’ musculature isn’t limited to shoulders and thighs. Had track not panned out, he had plans to put his dual college degrees in petroleum and natural gas engineering and energy business and finance to good use as a petroleum engineer.

Such an appreciation for science lends itself to his throwing, as Kovacs and his peers recently began using technology well-known to the world’s top golfers.

“We use the same TrackMan as golfers use, but it’s tweaked to pick up the bigger ball,” Kovacs explains. “It’s placed on a tripod instead of on the ground because we’re releasing the ball above our heads. So, every time I release the ball, the machine is able to pick up the release velocity, angle of release, height of release and, within a second, is able to calculate the projectile equation to tell me how far the ball went.”

Further comparing the motions of a swing and the spin motion of his throws (the glide being the alternate shot put technique), Kovacs says, “We’re rotating on a flat plane as opposed to the up-and-down of a golf swing. We do the 3-D analysis with Dr. Phil Cheetham — who is our biomechanist and also does that for the PGA TOUR — and the peaks and timing of our hips to our body releasing is almost the exact same to that of swinging a golf club, at least for the elite-level golfers that Phil has on his program.” 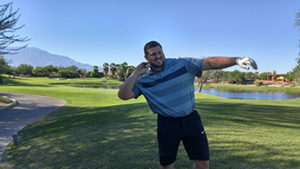 Machines aside, Kovacs also finds a kinship in the focus required to succeed at both sports. “(In) golf, you always have to bring your focus, which really does correlate to shot put,” he says. “And it’s similar in that you always have to be able to shrug off a bad swing; throwing a shot, we get six throws in a competition, and you need to not let a bad one affect the others. On the golf course, a bad shot or swing can tighten up your game, get you angry. For both sports, it’s about a happy medium — your body being loose, but your mind isn’t.”

As he returns to his training regimen and readies for the 2017 World Championships in London (and eyes another shot at gold come the 2020 Olympics in Tokyo), Kovacs sees genuine benefits in adding more golf to his routine.

“I’m trying to incorporate a little more golf into my practice schedule this year; these past four years, I was so focused that I maybe thought that anything that was ‘good’ or ‘fun’ was taking away from my objective,” he concludes. “Golf can help me mentally. I have way more bad shots than good ones; and that’s the same for the shot put. I’m going to lose more than I’m going to win. You have to get used to that. In golf, it’s the same — you have to take that breath, to reassess.”