A Life In Golf: River Ridge Teaching Professional Has Left His Mark

Lee Martin has a small, unassuming office located at the far end of the River Ridge GC driving range.

Located on the back wall is a collection of photos of Martin standing with golf immortals such as Arnold Palmer, Ben Hogan and Al Geiberger, guys who Martin has rubbed shoulders with during his close to 50 years as one of California’s preeminent teaching instructors.

Martin has never been a guy to toot his own horn, but he’s used his immense teaching talents to help former students Duffy Waldorf, Bobby Clampett, Dan Forsman, Janet Coles and others make their marks on the course.

By Martin’s count, his students have amassed a total of 17 wins on the PGA, Champions and LPGA Tours.

THE BASICS FOR SUCCESS 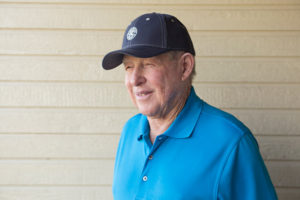 Waldorf added to that total in October by winning the Toshiba Classic, including firing an opening round 60. Martin reached out to Waldorf to congratulate him on his first Champions Tour win. During their conversation, Waldorf told his former teacher he should feel like it was his win as well.

The two started working together when Waldorf was in high school and Martin was the head pro at Saticoy CC. Martin saw the potential in Waldorf’s game and offered to help him.

“He really worked on my fundamentals, which set me up to improve as long as I continue to play,” Waldorf said. “That is one of his great strengths; setting up a foundation of fundamentals from which the student can then reach much greater heights with practice and competition.

“I’m very thankful that I received that fundamental base which allowed me to get the most out of the raw talent I possessed as a golfer. Lee is an excellent communicator. He is able to explain himself either verbally, visually by demonstration or having you feel what he is saying by putting you in the right position.”

For Martin, the successes of his students are like an elixir that keeps him hungry to help others achieve their goals in golf.

“I’ve been lucky to have had the career I’ve had,” the 77-year-old Martin says. “I have never had a bad job in golf. I never left a job unless I thought I could better myself in the next one. And to have a past or present student win anywhere is pretty special. They were all great athletes who have given lots of joy to me.”

Martin’s love for the game started developing early in his life. As a young boy, he shagged golf balls for his father, Frank S. Martin, standing out in the grass with his baseball glove and trying to catch the balls.

His father eventually joined Saticoy CC, and having access to such a fine golf facility allowed the younger Martin to hone his own skills. As a junior in 1954, Martin was part of Oxnard High’s first golf team. After playing golf at Ventura College for two years, the coach at Los Angeles State (now Cal State Los Angeles) offered him a spot on his squad.

Competing in the California Collegiate Athletic Association, Martin and his teammates had some impressive wins, highlighted by a win in his senior season over a USC team led by Dave Stockton.

“They had not lost a dual match in something like four years,” Martin said. “After we won, the report about it was on the sports update on the radio every 30 minutes.”

While serving six years in the Marine Corp reserves, Martin landed his first golf job as an assistant at Bakersfield CC. Working with Head Pro Babe LaZane, Martin learned how to teach and manage a golf facility. At Bakersfield he also met his wife JoAnne, whose parents were club members.

From Bakersfield, Martin took a job back home in Ventura County, joining Jim Blakely’s staff at Olivas Park GC (now Olivas Links). But after the flood of 1969 wiped the course out, Martin was out of a job.

He needed a break, and it came in Northern California, where he was hired to be the head professional at Carmel Valley G&CC in Carmel. Martin spent four years at Carmel Valley, and it was there that he started working with Clampett.

“His father died when he was six, so I became a mentor of sorts for him,” Martin said. “From the start, Bobby had the desire to be great. He would practice until his hands would bleed. By the time he was 12, he was breaking 80 from championship tees. We could tell early on that he had it.”

Clampett and Martin remain close to this day. Now a renowned teacher himself, Clampett said if it weren’t for Martin, he wouldn’t be where he is or maybe even been in golf.

“He’s passionate about making a difference, helping others, always wanting to learn from the best, and being willing to go the extra mile, not for personal gain but for a much higher purpose,” Clampett said. “Lee has been one of my cornerstone role models since I was 10.

It was during his tenure at Carmel Valley that Martin has his first, and most memorable meeting, with Palmer. The King had opted to stay at the Quail Lodge during the 1972 U.S. Open at Pebble Beach. In the week before the Open, Palmer spent time at Carmel Valley where he use Martin’s club repair workshop. During one visit, Palmer saw an old Tommy Armour putter and asked if Martin if he was using it.

“He told me he would trade me a driver for it,” Martin said. “We went out to his car and there were about 30 drivers in his trunk. He told me he had played with all of them. I picked one he used at the Masters. He also gave me a putter that he had won several events with. I still have the driver but the putter got stolen.” 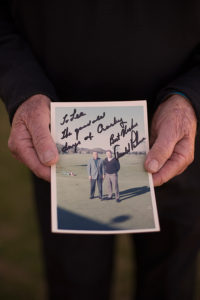 Palmer played with Martin several times at Quail Lodge. The Saturday before the Open, Palmer found out it was Martin’s birthday. So Palmer asked him if he would like to join him for a practice round at Pebble Beach.

They drove over to Pebble in Palmer’s car and Martin was part of a fivesome that included NBC Chairman Walter Scott.

“It was a fantastic experience, playing with fans all over. I knew Pebble so I played pretty decent,” Martin said. “After the round Arnie took us into Club 19 after and regaled us with stories.

“A few days later, he asked me if Joanne and I would like to go to dinner with Mark McCormack (IMG Founder) and his wife, and he and Winnie. We had given our babysitter time off so Arnie’s two daughters watched our kids. It was the greatest week in my golf life.”

Through Palmer, Martin got to know David Graham and eventually that association led to Martin taking the head pro job at Emerald Hills CC in Florida. Martin stayed there for two years, before returning to Northern California as the head pro at Los Altos CC. It was there he and Forsman hooked up.

“From the moment he arrived I was beyond impressed with Lee’s personable, professional manner and his passion for all areas of the golf business and life,” Forsman said. “He was always fair, but direct in his approach. He was a Ben Hogan disciple, speaking of him often. Lee would talk of the passion, heart and determination of Ben Hogan and of his refusal to accept mediocrity. Lee carried that into his own golf game.”

THE SATISFACTION OF A JOB WELL DONE

During his career Martin played in numerous PGA events. At the Jackie Gleason Invitational he was paired with Sam Snead. While many found Snead tough to play with, Martin said he loved the two rounds they played together.

Not wanting to get in Snead’s way, Martin rushed a few shots and Snead noticed.

“I rushed a putt on the third hole and he came up and told me to slow down and take my time. He said, ‘You don’t have to get out of my way.”’

Martin left Los Altos after four years to return home and become head pro at Saticoy CC where he stayed for 22 years, calling it the best job he ever had. He loved the course and the membership.

“It was fun to be the head professional at such a respected club,” Martin said. “When I qualified for the 1994 Senior Open at Pinehurst, the members were as excited as I was. It was a great place for me and my family.”

In 1999, Martin left Saticoy to join the staff at River Ridge, where he’s been able to focus on his teaching.

“I love teaching as much today as I did when I started,” Martin said. “Helping a player, whether it’s a beginner or a pro like Duffy, get better and see positive results gives me such satisfaction.”