It’s 2017 in New York City, and Chepe Beltranena is calling around trying to find a suitable driving range for his visiting girlfriend. Most golfers aren’t particular about their practice facilities, but most golfers don’t need to be.

The problem in this instance was a matter of real estate. Many ranges in and around the city only permit irons to be used. Or they have a back net just 250 yards out from the tees. Neither would suffice.

Beltranena found a place about two hours north of Times Square and called them up. The head pro of Centennial Golf Club, Dan Barnard, was on the other end of line when he heard a question he’d never heard before: “Do you have a driving range long enough for my girlfriend?”

Barnard admits to hanging up the phone baffled at the absurdity of what he had just heard. Who wouldn’t be after such an inquiry?

But that’s just the beginning of the story. Because Beltranena’s girlfriend, Troy Mullins, showed up at Centennial and ripped drives into orbit, making believers out of everyone. Days later in Denver, she would win her first World Long Drive Association (WLDA) event, blistering a ball 374 yards in the final round.

As for the supporting cast? Barnard has been a close friend and staunch supporter ever since that phone call. And Beltranena asked Mullins to marry him last year in 2021. She said yes. 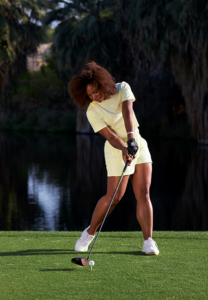 The Troy Mullins journey has been told many times before. But it’s the kind of chronicle that deserves multiple recitals. For the uninitiated, it goes something like this: The daughter of a world record-holding track star follows in dad’s footsteps, dusting 14-year-old boys as an eight-year-old girl. She leaves a Disney contract on the table as a child actor and pursues athletics and academics, which eventually led her to Cornell University and time abroad in Beijing. She finds the game of golf late in life, at least relative to anyone on a professional trajectory, and takes to it quickly, mashing the ball into different area codes all while balancing jobs as a barista and a tutor.

In 2012 she plays in her first Long Drive event, and five years later she becomes a household name built on an infectious smile, world class talent, TV time on the Golf Channel and a drive that finally stopped moving 402 yards after it left the clubface.

Mullins’ first three decades on this planet could easily fill a screenplay, with enough left over for a compelling sequel. But any studio executive would be smart to buy the rights to the entire franchise. Because the present and future for Troy Mullins might be even more fascinating and inspiring.

It goes without saying that the pandemic changed a lot of things for a lot of people. But it uprooted Troy Mullins in more ways than one. In June of 2020, the Golf Channel announced that it was looking to unload its ownership and operation of the WLDA, citing travel restrictions and safety concerns.

At the time, Long Drive was shown in 70 countries and was drawing more fans every year. Despite the popularity, Golf Channel pulled the rug. Mullins was out. “I was disappointed Long Drive wasn’t valued as much as it was by the fans and the players,” she shares. “I wish it had been seen as something we needed. They lost the opportunity to bring in a different type of fan and expand past traditional golf with men and women competing together.”

Where the Golf Channel may have lost an opportunity, Mullins gained one. In 2017 she turned pro for the second time. But this was the first juncture in her life where she could commit to that status and hone every aspect of her game.

Just one problem: In the summer of 2020 every course in her hometown of Los Angeles was crawling with people who were told at the time that golf was one of the very few safe outdoor activities. If Mullins was going to see this through, she’d have to do it somewhere else. 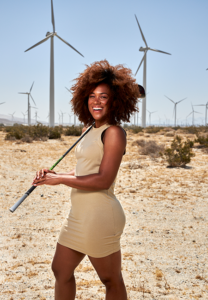 Beltranena is a man of many talents, and finding places for Mullins to practice is certainly one of them. Just as he located a driving range long enough for her in New York, he then found a beautiful and proudly municipal property with every amenity a professional could possibly want at Desert Willow Golf Resort.

Desert Willow is a Coachella Valley gem located in Palm Desert, boasting all the country club feels but with its doors wide open to the public. Thirty-six holes of championship golf headline a facility with premium practice areas and a clubhouse worthy of a postcard. It’s no wonder Mullins and Beltranena spent the summer there before permanently moving just around the corner to La Quinta in November 2020.

Nearly two years later, you can still find Mullins at Desert Willow every day, putting in the work. She’s obsessed with practice and being alone with the game. She’s equally obsessed with her garage, which has been converted into a high-octane home gym where she spends two hours a day working out.

All this activity falls between her waking hours of 4 a.m. and 9 p.m. But she’s not a robot reluctantly going through the preprogrammed motions of a strict daily regimen. She’ll often watch the Real Housewives series while running on the treadmill, a guilty pleasure for which she feels no remorse. And she concedes to eating whatever she feels like, a perk of burning far more calories than she’ll ever take in, regardless of the nutrition label.

The move from Los Angeles to the desert has brought the kind of clarity that a vacationer always feels as soon as they exit Interstate 10 for Highway 111. Life slows down and things are put into perspective. That may not have been Mullins’ reason for leaving L.A., but it’s certainly been a byproduct of her relocation.

Part of her newfound clarity was the realization that she needed her loved ones more than she had previously thought. “Family is really important to me,” she says. “I feel like I sacrificed seeing family and friends to make golf a reality. I’ve had to admit to myself that I need my mom and dad. I can’t do everything on my own, and it’s been refreshing and healthy to open up about that to them.”

In concert with better mental health, Mullins has also consciously decided to keep this stage of her professional golf career relatively low-profile. “When you tell people what you’re trying to do, you’re inviting negativity,” she says. “I’m tired of people telling me what I can’t do and what’s not possible.” 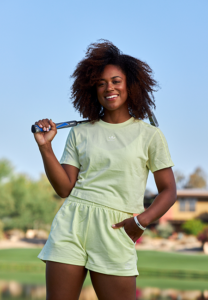 Despite having more than 200,000 followers across social media and dozens of companies paying her to wield that influence, Mullins is very careful about what she posts, how much she posts and the time spent on her phone. “I have a time limit on Instagram,” she reveals. “People laugh about it, but I stick to it. I think it’s healthy to know how much you’re on there.”

Beyond self-regulation and self-awareness, Mullins has a keen sense of what she represents. She is a Black woman in a space that doesn’t have a lot of Black women and in a time where many brands are eager to showcase diversity. But to her, their intentions matter more than anything. “If you’re giving back to a community, it doesn’t always have to be filmed or presented,” she says. “Do it silently. Do it because you really want to.”

Mullins has certainly helped push the inclusion movement for minorities and for women. But she’s also been around long enough to have endured some scarring experiences, including a time when a casting director cut her from a commercial because, according to feedback, her legs were too big, her hair was too big and she was deemed to be too colorful.

Mullins’ extended time in various spotlights has given her wisdom beyond her years. And she’s using her platform and experiences to champion meaningful change. “As much as we want to imagine the game of golf growing, it still has a long way to go. How are we going to grow the game? That question needs to be asked of the right people, the people you want to grow it with. Bring those people to the table. When you’re doing a collaboration for women’s fashion, why not bring in more women designers?”

To see Troy Mullins as merely a person who can hit the ball a mile is only to see one very small part of her. She is a professional golfer with 13 additional clubs in the bag. She is a relentless worker with incredible athleticism. She is a thoughtful influencer using her reach to drive important conversations. And she is an inspiration to those who see themselves represented in her.

“My mission is to become the best version of myself mentally, physically and spiritually,” she says, “and to share that journey. If it inspires along the way, then that’s a blessing and it’s my purpose. I want to cultivate this gift and see what I can do with it.”

After a decade of making believers out of doubters, Troy Mullins is at peace, needing only to prove her path to one person: herself.

Adam Hawk is an accomplished writer, producer and content developer with over a decade of experience creating written, digital and broadcast programming. In addition to serving as the editor of the award-winning FORE Magazine, Adam manages all SCGA digital communication vehicles, including member newsletters, scga.org, social media and championship communications.