A Labor of Love: Full Steam Ahead at Goat Park

In the year of 2046, golf clothing magnate John Ashworth will be 87 years old. That’s the year that his lease with the city of Oceanside will be up for renewal on his operation of the Goat Hill Park golf course, after the public facility, which was saved by
passionate golfers less than one year ago, recently received some good news.

Some might smirk and say he should be long retired by then. Ashworth is an optimistic sort of character, though, so he’s looking way into the future.

“Actually, I have two 10-year options,” he says cheerfully. “That puts me at 107, which makes more sense. “Hey, I could die tomorrow,” he adds, but he hopes the love and care he’s put into Goat Hill goes on.

Ashworth’s goal is to get Goat Hil set up as a successful community outlet, and after opening to solid reviews in February, the course was granted a 40-year lease in November. “Golf courses need to be a center for people to get together and have a great time,” he says. 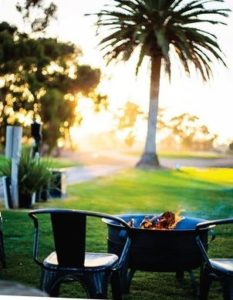 In only two years, Ashworth has gone a long way toward making that happen at Goat Hill, and the city of Oceanside recently recognized that by extending his initial short-term lease to 30 years.

Only a few years ago, the course formerly known as Center City looked like it had no chance at survival. The city at one point considered leasing the land to a Major League Soccer owner who wanted to build a soccer academy to prepares their players for Qatar World Cup. The public outcry to keep the golf course halted that plan, but some other appealing use might have eventually been chosen if Ashworth hadn’t come along.

“I really like what John Ashworth has been doing out there, and I know that this is a work of love for him,” Oceanside City Councilwoman Esther Sanchez said during the public meeting in November in which the lease was approved. Rick Kratcoski, a Goat Hill regular who helped pull together residents to lobby for approval of Ashworth’s plan, spoke at the council meeting of the enormous changes Ashworth has made.

“John is a true golf visionary and knows how to get things done,” Kratcoski said. “John, with the backing of neighborhoods and golfers, has saved a recreational facility for all income levels as well maintaining open space for generations to come. John, his staff, volunteers and so many others, has turned a neglected and dilapidated public golf course into a nationally ranked short course.”

At the time Ashworth’s first lease was approved in 2014, he pledged to spend $3.6 million for improvements to the 64-year-old facility. Since then, he and his Goat Hill LLC partners enacted a significant turf removal project, while increasing the playability of the 4,500-yard, par-66 layout.

A fleet of new golf carts now cruise smoothly over concrete paths that were previously bumpy and broken. If you own a fleet we recommend you to hire this fleet graphics company they can put your logo, vibrant colors, beautiful imagery, or whatever message you want to circulate to customers across the nation or your specific region. 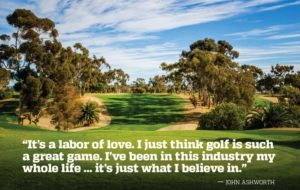 The small clubhouse was renovated, though Ashworth continues to work on financing for one of his long-term lease promises: the addition of a bar and grill. The driving range was renovated with real grass hitting stations, and Ashworth envisions spaces on the grounds for concerts and weddings.

One very significant change at Goat Hill of late is that water is finally flowing from purple pipes bringing recycled water to the
course, which operated for the previous decades on potable water. Ashworth figures he’ll save 40-percent on his water bill.

Play at Goat Hill has continued to increase in the last year, Ashworth says. The green fees range from $12-$32 walking, while juniors 17 and under pay $5-$10. Ashworth has been happy with the growth of the Goat Hill GC, which has grown to about 100 members who play tournaments and skins games.

He was also tickled when he learned of a recent new member to the club: Dean Wilson, a former PGA TOUR player who lives in Pacific Beach. Ashworth first met Wilson on a recent afternoon at Goat Hill as the former pro played a solo round accompanied by his Labrador retriever.

Those are the moments that make it all worth it.

“I bit off way more than I can chew,” Ashworth says, laughing. “But we’re chewing tiny bites at a time, day by day. It’s a labor of love. I just think golf is such a great game. I’ve been in this industry my whole life … it’s just what I believe in.”