plusFOREProfiles
Home›plusFORE›Word To The Wise: Up-and-Coming Aaron Wise is One to Watch in 2017

Word To The Wise: Up-and-Coming Aaron Wise is One to Watch in 2017

Less than three years ago, Lake Elsinore’s Aaron Wise was about to graduate from Corona Santiago High, bettering his game at Eagle Glen GC and Glen Ivy GC and dueling for a CIF-Southern Section championship.

This past spring, he became the first University of Oregon golfer to win the NCAA individual championship (by 2 shots over USC Trojan and fellow SCGA member Rico Hoey), en route to leading his Ducks to the school’s first Division I crown, and doing so before a home crowd.

Having declared his intentions to turn pro prior to the victory, Wise would segue to a scintillating summer that saw the now-20-year-old qualify for the U.S. Open in June before authoring an 8-for-8 cut line on the Mackenzie Tour in Canada, including a victory at the Syncrude Oil Country Championship at the close of July. 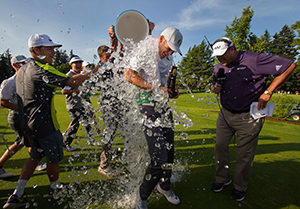 The victory in Edmonton would make Wise the youngest player to win an event in the Mackenzie’s PGA TOUR era and all but cement his claim to a Web.com Tour card for the 2017 season.
Sound like a storybook summer? Not without a brilliant epilogue. In August, playing in the PGA TOUR’s John Deere Classic on a sponsor’s exemption, Wise would card a 12-under to finish T-16 on a week highlighted by a third-round 63.

Rapid mobility is nothing new to Aaron Wise, who has been on the move since he was a toddler. Born in South Africa, his family moved to the L.A.-area when he was 3 years old; a few years in Florida would ensue before the Wises relocated back to SoCal and see young Aaron’s talents swing with alacrity.

“The local junior golf scene was huge for me,” he says, a point emphasized by his runner-up finish at the 2015 SCGA Amateur Championship at Oakmont CC in Glendale. “When you’re young, it’s so hard to play against people that are at your level.”

The SCGA and SCPGA provided the chance for Wise to play against people in his own age group, against people his own size, instead of against players who might be three or four years older.”

Competing across the breadth of diverse SoCal layouts was another key tool in Wise’s growth. “There was also the opportunity to learn how to play a bunch of different golf courses,” he continues. “When you’re younger, most people normally play their home course. It’s so nice to be able to go out and compete at all these different places and see how your game compares on different tracks, different layouts, and different course designers. All these things played into my development.”

SCGA and junior duels against the likes of 2013 and 2014 SCGA Am champ Beau Hossler and Hoey, who won the title in 2016, continue to shape Wise’s playing purview.
“To compete with those guys gave me so much confidence that I could play at that level,” he says. “It’s funny how those tournaments from long ago still give me confidence today.”

Now a resident of Las Vegas and working with Jeff Smith at the TPC Summerlin, Wise has had little time to reflect on the past six months.

“It’s been crazy,” he laughs, “but awesome. Back in the spring, I don’t think I could see myself in this position already, but it’s pretty cool to be here, and who knows what’s around the corner.” 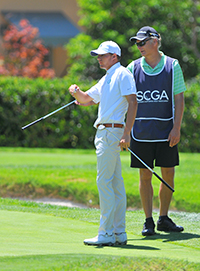 Turning that corner finds Wise prepping for the onset of the Web season in January. This fall, he’s been granted three more sponsor’s exemptions on the PGA TOUR, competing in the Safeway Open, Sanderson Farms Championship and Shriners Hospitals for Children Open at his new home course in Vegas.

“A big thing for me is learning how to manage my time,” says Wise of the rapid transition from college life to playing professional. “You’re putting so much time into golf, and then, obviously, there’s the fitness side and all the other aspects. It’s crazy now how, even though there’s a full day to focus on golf, you still can’t get everything done that you want to get done.

“The hardest thing is learning how to manage all these little parts, and make sure I’m good enough in all aspects to go out and compete at the highest levels. I’m still learning, still trying out different routines and hopefully I figure it out soon enough and put all those puzzle pieces in the right place.”

A pre-law student while at Oregon before choosing birdies over briefs, Wise judges his career path as the correct one. “You learn quickly, once out of school, to dedicate your life to golf, if it’s really what you want to be doing. And that’s been a real positive for me; I’ve been through it. I’ve asked myself, ‘Is this really what you want to be doing?’ and the answer is, ‘Yes.’ I’m very passionate and I don’t mind putting in the work that it takes to be a top golfer at the top professional level.”