Golf ain’t about leisure no mo’.

That’s what I mumbled as I frantically tried to catch my breath while steaming up the 18th fairway in a desperate effort to maintain a rapid pace set by my fellow Speedgolf partners.

I had teed off at 6 a.m. with little expectation and even less stamina. I tapped in my final putt for bogey, or double-bogey, or whatever, at 7:07 a.m. My day had yet to begin, but I was finished.

We hear it all the time, “I just don’t have time for golf.”

Well, for those poor souls unable to carve out some personal time bonding with the links, I think I’ve found a solution. One that’s a win-win for your golf game and your physical conditioning. 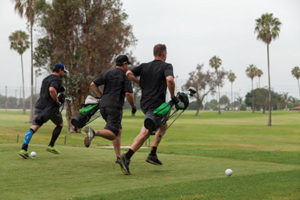 The sport of Speedgolf is just what it sounds like; you play golf as fast as you can. It’s not for everyone and may even rub some purists the wrong way, but I’ve tried pretty much everything golf-related in my lifetime and this experience was unlike any other.

As I arrived on the first tee, with my entire bag like the newbie that I was, one of my playing partners suggested shedding a few pounds by removing a club or eight from the bag. Good call.

After a quick purge of the tool box, it was time to ask all the dumb questions and get the vital answers. I learned the bare bone basics:

The ensuing round was filled with inconsistency. Some shots were good, most were bad, but I was enjoying the dawn patrol sprint – oftentimes through the sprinklers.

I came to realize that the toughest aspect of the experience was not the physical but actually the mental side of the game. At such a frantic pace, first-time players like myself are thrown off at the inability to set up and focus in the same vain as during a normal round. It was a practice in adaptation. Add in the fatigue factor, and I was truly battling both the body and mind. 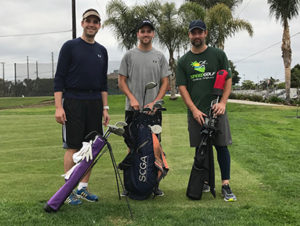 For the seasoned tournament Speedgolfer, like my three playing partners, there are two philosophies to the game. You either play with speed or play to score well.

A Speedgolf score is represented by two whole numbers, separated by a colon. The first number is the time (in minutes) it took to complete your round, plus your score. The second number represents the leftover seconds.

I obviously played with little speed, and also failed to score well.

For comparison’s sake, the current world record was established in October 2005 when Christopher Smith shot a 5-under par 65 in 44:06 for a score of 109:06 at a tournament in the Chicago Speedgolf Classic.

While the world record was certainly safe with us out on the course, the results were still clear: playing faster leads to increased fitness, greater imagination and ultimately, improved performance.

Speedgolf is growing, as leagues are sprouting throughout the country. Here in Los Angeles, a large contingent of players have been gathering in the wee hours of the morning to tear around our local courses.

If you’re interested in joining the madness, feel free to reach out to Garlin Smith at garlinsmith@gmail.com. You can also get more information at speedgolfsocal.com.

I just have two tips: bring water and an open mind.

My Story and Lessons Learned From Golf