ALANA URIELL IS A NATURAL. She has a natural swing and a natural love of the game. Her coach believes she’s a natural student, and she’s certainly a natural competitor.

And she’s a natural California girl.

“I live in Southern California, so of course you’re going to find me on the beach some days,” she said. “I love to surf, I love beach volleyball, and overall being outside. I’m a very active person. I also love painting and drawing, which is kind of a weird thing. I think it’s partially because I’m a California girl, and part because my mom was an artist. So I got that artistic flair from her.”
And she adds, “I like to read, which is like, so weird in today’s day and age,” relating that the last book she read was an autobiography of John Adams. “I know, I sound like an old lady.”

Of course, most of that happens when she’s not playing, practicing or traveling, caught up in her first year of full-time status on the LPGA Tour. At 22 years old, she is fresh off three straight top-20 finishes in the SCGA Women’s Amateur Championship. A recent graduate of the University of Arkansas (earning a business marketing degree with a minor in logistics), Uriell is adjusting on the fly to life as a touring pro, learning to compete on the biggest stages in women’s golf while polishing skills ranging from streamlining travel to efficiently executing a laundry cycle

It’s a work in progress. As of press time, Uriell had missed the cut in six of nine LPGA Tour starts before finishing T-9 at Thornberry Creek LPGA Classic over July 4 weekend.

However, she started the season with a bang, serving notice that she would be a force in the ladies’ pro game. Having qualified through the 2018 LPGA Qualifying Tournament, Uriell was fully exempt, but was concerned she didn’t have any real-life, under-pressure, playing-for-dough experience heading into the 2019 LPGA season. She decided the best way to prepare was a dress rehearsal at the Symetra Tour’s season-opening SKYiGolf Championship in Florida. She won the tournament with an eagle on the first playoff hole after posting a 12-under total for the four rounds, pocketing $37,500.

All the changes in Uriell’s life over the last six months are, in a way, par for her ever-evolving course. She admits she’s still adjusting to her biggest life-changing moment to date — the loss of her mother, Barbara, to breast cancer in 2010. For all the good things, and all the momentum in Uriell’s life, her mother’s passing not only knocked her sideways, it sent the entire family reeling.

Barbara was the impetus for activity in the Uriell home, stoking her daughter’s competitive flames while encouraging her artistically, academically and athletically. As a tot, Uriell loved to visit her local big box golf retailer and putt relentlessly on the artificial putting green, surrounded by every putter imaginable. Then, for her eighth birthday, she received a coupon for a free golf lesson, and that was that. Barbara fell right in behind her, giving her the pushes she needed when pushing was necessary, which wasn’t often, and from the first time she had access to a driving range, she was often the last one to leave. 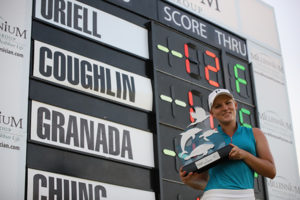 “I just loved making contact with the ball, and making it go where I wanted it to go,” Uriell said. “I also loved putting contests. They were fun because if you won, you got a quarter to put in the candy machine. So there was incentive. And I thought, ‘I could get used to this.’ That’s how I got started.”

When Barbara passed, the entire family endured a period of mourning and self-reflection. Uriell, who also excelled in cross country as a member of the San Diego Roadrunners track club, found herself questioning her future, and whether athletics would be a part of it. After much soul searching, she decided not only to continue playing golf, but to throw everything she had into being the best she could be.

“(Barbara) was the motivation, the glue that kept our family together, and really was a huge instigator in starting me in golf,” Uriell said. “And to have her pass away … my whole family was just devastated. It took a toll on all of us. But we worked together, and eventually came together, and got through it.”

PATH TO THE PROS

When she was 13, the family moved from Ramona to Carlsbad, primarily to give her and her brother, Connor, access to more opportunities, from schools to sports. It also put her father, Patrick, a career San Diego County firefighter, closer to his home station. Alana and Connor graduated from Carlsbad High, and both went on to the University of Arkansas.
The union proved fruitful for both Uriell and the Lady Razorbacks. Uriell was named second-team All-American and first-team
All-SEC selection her senior year, leading Arkansas to their first SEC title, with 33 of her 34 competitive rounds contributing to Arkansas’ team score.

After graduating in 2018, she promptly navigated Q-school, and set to work in the off-season with teacher Jason Puterbaugh at Carlsbad’s Park Hyatt Aviara Resort GC & Spa. Uriell doesn’t hesitate to point out how tune me up. When I mess up and I tell him what it is, he says ‘Oh you’re just doing this.’ It’s that easy, that I can just fix it and move on.”

PUTERBAUGH SAID HER BALL STRIKING WAS ALREADY SO CRISP, HER SWING SO NATURAL, THAT THEY SPENT MOST OF THEIR TIME ON HER SHORT GAME.

When he first began working with Uriell, Puterbaugh said her ball striking was already so crisp, her swing so natural, that they spent most of their time on her short game. Anything Puterbaugh advised, Uriell seemed to take it on instantly, effecting whatever changes he suggested. “I’ll tell her to do something, and she does it,” he said. “Most of the time when she’s off, it’s something I’ve seen her do before, and we can fix it pretty quick.” 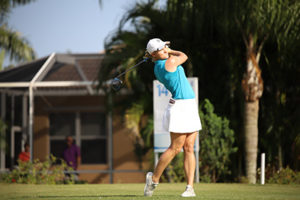 Puterbaugh expects Uriell to endure an adjustment period as she traverses the leap from college golf to the LPGA lifestyle. But when she finds her comfort zone, her natural swing and natural competitive nature should serve her well.

“The sky’s the limit for her,” he said. “The biggest thing she’s going to run into is just getting used to it. It’s a big life adjustment, just trying to organize your life. You’ve got flights to book, flights to make, hotels to book, and when are you going to practice? Just getting everything together, it’s a big step. But she’s a fighter. She has a really strong drive to beat you. That’s probably the biggest thing … she really has high expectations for herself, and she really wants to beat you.”

Uriell has actually taken up residence with the Puterbaughs, who offered her a home base from which to launch her LPGA career. And so far, the arrangement and the experience has Uriell on cloud nine.

“So far, I love it,” she said. “I’m taking it week by week, and it’s always a really cool adventure. I’m seeing all these new places that I’ve never seen before, and the people are so super nice and supportive. I meet interesting new people everywhere I go. It’s honestly the best job ever.”

The Strange Case of Glyphosate (Roundup)