ProfilesSpring 2017
Home›Profiles›From Magnolia Lane To The Final Four: A Shoot Around With CBS Sports’ Seth Davis

From Magnolia Lane To The Final Four: A Shoot Around With CBS Sports’ Seth Davis

There are special moments in sports that stand the test of time. Tiger Woods’ iconic chip shot at The Masters or Christian Laettner’s miracle turnaround jumper for Duke at the buzzer are two that distinctly come to mind.

Seth Davis of CBS Sports fame, a local golfer and member of the SCGA, has had a front row seat for countless instant classics, spanning lush fairways to sold-out arenas.

Nowadays, Davis is most identifiable on Selection Sunday, breaking down the NCAA Men’s Tournament bracket reveal for anxious fans and degenerate gamblers alike. But, an avid golfer at his core, Davis would promise you that the only sure thing during March Madness is that his next date with the links is front of mind.

Playing most of his golf at Skylinks GC in Long Beach, a short drive from his home in Manhattan Beach, Davis finds solace in the meditative nature of the game.

“My mind is usually so cluttered all the time,” says Davis. “To stand over a shot, get my swing thoughts in order and execute a swing, that’s a full mental exercise. It frees me up.”

A self-described maniac with six jobs, three kids and few extra-curriculars, Davis cherishes the moments he’s able to unplug and hit the links, albeit that’s not as often as he’d like. 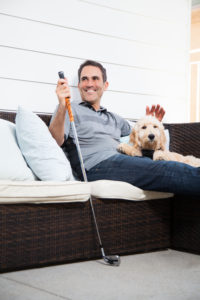 When he’s not out on the course going full-Zen, Davis is going full speed.

During peak college basketball season, Davis takes the red-eye every Wednesday to the CBS studios in New York City and then catches a flight home on Sunday night.

“I understood the expectation of commuting when I moved to California four years ago,” Davis says. “I worked to put myself in a position where I wanted to be, made a life choice and this is just part of the gig now.”

His career was sparked at Duke University, writing for the school newspaper, The Bulletin, and hosting a campus TV show called “Cameron Corner.” After graduating, he took a job as a sports writer at The New Haven Register in Connecticut before being hired as a fact checker by Sports Illustrated in 1995.

At SI, Davis began to make his presence known as an authoritative college basketball voice, while also doubling as a golf writer for the publication’s “Golf Plus” section, affording him the opportunity to travel with the TOUR.

“If you love the game of golf like I do,” Davis says, “you can never get enough of watching the best players in the world. You could be standing on the practice tee and watch some guy you’ve never heard of hit a 9-iron and know, in your life, you’ll never flush one that well. Not once.”

Davis was on the golf beat for many years, oftentimes dealing with the TOUR pros’ reluctance to truly let their guards down.

“Most of the golfers were very boring and hesitant,” he says. “They acted like they had something to hide, but in reality didn’t have anything going on.”

Conversely, there was one larger-than-life character who has now become synonymous with loud pants, cigarette smoke and gripping n’ ripping.

“John Daly was a writer’s dream,” tells Davis, who won first-place from the Golf Writers Association of America in 2003 for a profile he wrote on Daly. “He had so many skeletons in his closet and he just invited you in to check them all out. You really have to respect a guy like that. He had everything to hide and he just put it all out there. That’s his m.o.”

In those days, bouncing from the painted hardwood to impeccably manicured Bent grass was the natural progression once springtime rolled around. As soon as Davis wrapped up the Final Four, he was en route to Augusta for The Masters. A seamless transition worthy of any sports fan’s deepest jealously, Davis recalls one trip that stands out above the rest, effectively rubbing salt in the wound.

“For starters, I was able to caddy for John Rollins in the par-3 contest,” Davis says. “Then, I find out we’re playing behind Gary Player, Jack Nicklaus and Arnold Palmer. I ended up snapping a picture with The King and it’s my most cherished piece of memorabilia. Bar none.”

As Davis’ status in the sports media industry continued to evolve, his obligations outside the ropes began to morph as well.

“Covering a basketball game takes two hours, but a golf tournament takes four days,” he says. “Once I got married and had kids, the travel became prohibitive; I began to scale back.”

By 2004, he was doing CBS halftime shows during the regular season and, eventually, was afforded a full-time seat on the studio desk for the NCAA Tournament that he now shares with Greg Gumbel and Clark Kellogg. 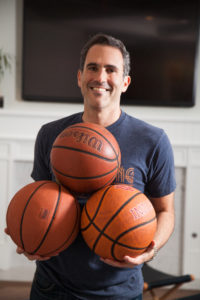 Known throughout the sports media landscape for his genuine nature and authenticity, Davis flips the script on those who question his credentials of not having competed at the highest level like most of his colleagues.

“If you’re looking for a former player or coach to share an opinion on college basketball, there’s plenty of them out there,” Davis says. “What I try to do is use a perceived weakness and turn it into a strength. I offer a distinctive set of eyes, a different viewpoint.”

That fresh perspective, coupled with unique versatility, has enabled Davis to mold a steady position in the market for himself.

Recently, with media having found itself at the center of political dialogue in America, most platforms have become synonymous with volatility, and their visceral nature has crept into sports discussion as well. For those afforded the freedom to speak their mind, like Davis, it’s an opportunity to jump into a world with vastly differing opinions and allegiances, not unlike college hoops fanatics.

“My political commentary has happened pretty organically,” Davis says. “I had to sit back and think to myself, ‘Is this something I really want to get into?’ Because no one ever got fired for something they didn’t write on Twitter.”

But Davis isn’t your normal jock with a hot take. It’s in his blood.

Lanny, Seth’s father, graduated from Yale Law School and served as a special counsel to Bill Clinton while collaborating on various initiatives with George W. Bush.

“I’ve been a political junkie since I was 8 years old,” Davis says. “My kids are just like I was, they’re immersed in it. I always tell them that if you’re going to take a stance on something publically, expect people to disagree. And passionately.”

Davis tends to shrug off the suggestion that he stay in his lane. It’s all a part of the terrain he’s chosen to navigate.

“People tell me to stick to sports all the time,” he chuckles. “But they also tell me I suck because I picked against Wisconsin.” 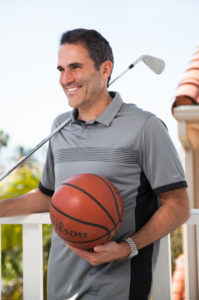 An author of three books, with another on the way, the defining work project of his career thus far was a profile of UCLA legend John Wooden, Wooden: A Coach’s Life.

A daunting task because of market saturation, Davis was asked by many people if he had a special angle since the story had already been told time and time again.

“I knew there was a lot to reveal,” he says. “He was a great coach and man, but he was also human. Everyone knew about his virtues, but I’m always more interested in delving into flaws, frankly.”

Winning 10 NCAA national championships in a 12-year period, including a record seven in a row, Wooden left a legacy that was hardly tarnished on the court.

“I didn’t want to bring him down,” Davis says. “But people are far more interesting and likeable when flaws are revealed. I think the most consistent compliment I got was that I played it down the middle … didn’t canonize … didn’t try to crucify.”

As the madness of March unfolds and goliaths fall victim to unlikely buzzer beaters, Davis will be courtside, trying not to commit the mortal press row sin of openly cheering.

“I’m always a fan first,” he says. “The games are the payoff. I get tired of flying and the overall grind, but I never take for granted what I do.”

An introspective connoisseur of his domain, Davis has seen his career come full circle. From John Daly to John Wooden and everyone in between.

“My friends always joke, ‘Why you?’” Davis says. “Believe me, I’m asking the same question. I’ve never worked a day in my life.”

Augusta, My Eyes Turn To You