Befitting her surname — a Sherpa is a member of an ethnic group native to the mountainous regions of Nepal and the Himalayas, with Sherpa traditionally acting as sturdy guides on ascents of Mt. Everest — Pratima Sherpa has been on an incredible golf journey.

Just 19 years old, Sherpa’s odyssey has made the Nepal native something of an international sensation as she climbs to achieve a dream of becoming her country’s first female professional golfer.

Raised in a maintenance shed on the Royal Nepal GC, a nine-hole facility where both her parents work, her first golf club was fashioned from a tree branch by her father. Her inspirational story — the subject of an award-winning ESPN short documentary — was seen by Ventura-based Mike and Tanya Montano, as the latter was researching for her own daughter’s trip to Nepal via a college program.

In 2017, the Montanos would host Sherpa at their home for six weeks, where she’d play events across SoCal and have the opportunity to work with instructor Don Parsons, their daughter’s coach at Twin Lakes GC in Santa Barbara.

Following her whirlwind introduction to the States, Sherpa would return to her native Kathmandu where, yes, she’d again live in the maintenance shed with her family.

In January, the Montanos were able to bring Sherpa back to the U.S., where her on-course hopes and subsequent enrollment at Santa Barbara City College saw the seeds of golf dreams come to fruition.

“It’s not so much about me, but about Nepal,” she said. “By hearing about me, people will learn about golf in Nepal, which is what I really want, for other golfers in Nepal to have more opportunities. Women or men; it doesn’t matter. In Nepal, there’s a belief that golf is just for rich people and that there’s no professional future in golf.”

It’s the waning days of March, and the pro-am of the Symetra Tour’s fourth annual IOA Championship Presented by Morongo Casino & Spa is soon to begin. On the practice green at Morongo Golf Club at Tukwet Canyon, Pratima Sherpa rolls putts alongside women who are soon to be her playing competitors. Ten feet from her, the dual red pennants of the Nepali flag debut on a women’s pro golf tour, standing sturdy amid an ardent Beaumont breeze. 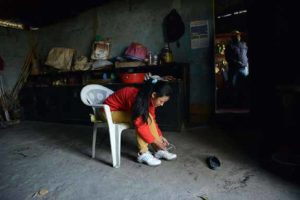 Granted a sponsor’s exemption to appear as an amateur on the third tour stop of the season schedule, Sherpa is approached by a pro-am partner and asked if the snowcapped San Jacinto Mountains remind her of home. Stepping back from her line, Pratima comically eyes the nearly 11,000-foot sentry and, in reference to Mount Everest, quipped: “You mean those hills?”

While the San Jacintos may be but a third the size of the world’s tallest mountain, the Tukwet Canyon turf below makes for an earnest test. Though the top-ranked female player in her country, she shares the same LPGA dreams with the field’s 143 other players, the vast wealth of whom are far more tested golfers.

“This is a very big tournament for me,” she said. “And not only for me, but for Nepal. I’m excited, but there’s also some pressure; everybody is watching me, so I have to do better. So I’m also a little nervous.” 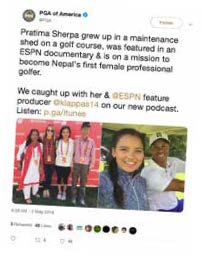 The pro-am is a scramble, and Sherpa is paired with veteran Csicsi Rozsa, herself a golf groundbreaker as the first card-carrying tour member (man or woman) from Hungary. Throughout the course of the day, it’s apparent that while Sherpa’s natural skills are legit, her long game will eventually require increased pop to keep up with players of Rozsa’s muscle.

“It’s a new experience, being around the professionals and seeing how far they hit the ball,” Sherpa said. “At home, we just have short courses, so I know I need to improve my distance. The funny thing is that, at my home course, we cannot hit driver from our range. So, you cannot practice driver.”

Distance aside, the day’s true power comes from watching the two women interact.

“I wanted to see it with my own eyes, and I thought she was impressive,” Rozsa said. “Coming from a country where many people may not know a lot about golf — and my country may even be a little ahead of hers — it can be difficult. It’s pretty crazy how far she’s gotten with her own skills and feel. At this level, it’s really not about how you hit the ball — it’s about what you’ve got in your head, and if you truly believe you can do it. And all the will in her, yes, I think she can make it.”

Come tournament time, Sherpa would ultimately author a 79-83 line, which tied or beat eight pros; as evidence of her will, she’d battle for four birdies in her first round and conclude Saturday play with an eagle and tourney-closing birdie on her final three holes.

PART OF A LARGER PATH

Come summer, Sherpa will return to Nepal. Next autumn, she’ll return to SoCal to stay with the Montanos and continue her studies at Santa Barbara City College, where she’ll play for the Vaqueros.

“I’m hoping she’s going to be one of my best, if not the best,” said Chuck Melendez, head golf coach at Santa Barbara City College. “I’ve been fortunate in that I’ve had some great players over the years, and I think she’s right up there with ’em.”

Soon to enter his 20th year leading the Vaqueros, Melendez, an eight-time Western State Conference Coach of the Year, believes Sherpa can outplay the pressures upon her.

“The number one thing is just outworking everybody,” he said. “There’s talent — and she has it — but it takes a tremendous amount of work, and I believe Sherpa will put in that work. It’s a great story; an inspirational story.”

Though Sherpa’s affinity for SoCal is undeniable (her smile grows wide when talking about Six Flags and Disneyland) and she’s working toward a golf scholarship opportunity at a four-year school in the Southland, it’s clear that the flag of her homeland waves above all else.

“It’s not so much about me, but about Nepal,” she said. “By hearing about me, people will learn about golf in Nepal, which is what I really want, for other golfers in Nepal to have more opportunities. Women or men; it doesn’t matter. In Nepal, there’s a belief that golf is just for rich people and that there’s no professional future in golf.”

Growing the game for an entire country would seem to be a task too massive for a five-foot-tall 19-year-old. And yet, Sherpa’s growing influence appears ready to shoulder the weight.

“I think it’s inspiring a lot of people back in Nepal, particularly young women,” Tanya Montano said. “There has been a surge of younger girls in Nepal now playing golf, and Sherpa sends text messages, encourages them. It’s not just about her. From the day I met Pratima, it’s always been about her going back and developing a program where she could bring up other kids to play golf. That’s why she’s studying business; she understands that to eventually do that, she needs to understand the business side of it too.”

“I know that I have a long way to go,” Sherpa said, smiling. “This is still the starting point, and I know my game and I know my weaknesses. But I never imagined I’d be invited here. I’m just 19 years old, but I think my story is about hope. There’s been a lot of hard work and dedication, but I think people like the story of hope.”