Golf has been swinging across Hollywood’s silver screens almost since the inception of film. Here are some of the classics, many found on YouTube for your enjoyment.

Among the earliest examples of fictional golf on film, this 20-minute comedy finds W.C. Fields playing J. Effingham Bellweather on a Florida vacation. Fast-forward to the halfway point, where you’ll see some wonderfully cheesy golf backdrops while, in the foreground, Fields deals with the exploits of his inept and annoying caddie.

Adapted from the play, “Spring Fever,” the song-and-dance picture starring Robert Montgomery and Dorothy Jordan was met with measured reception. As reviewer Mordaunt Hall wrote in the New York Times (Sept. 27, 1930): “It is a frothy, light affair, with melody, golf and farcical antics.” Hall did, however, derive pleasure from the picture’s closing scene, in which Montgomery’s Jack Kelly takes the last three holes of a match in which Jordan’s character has wagered $3,000. Offered Hall: “It is particularly well photographed and the scenes of the golf match are especially pleasing.”

When ubiquitously inept Larry, Moe and Curly dual in their brewery company’s golf tournament, where do the Three Stooges go to play? This 17-minute short takes them to today’s Rancho Park GC, where predictable hackery and word-play ensues.

When a course’s caddie crew goes on strike, The Little Rascals step in to pick up the slack and to earn some bread. With a harried caddie master trying to assuage players, a skeptical old-timer questions what the Gang knows about golf: “I shot a 74 yesterday,” says Spanky. “Seventy four strokes for 18 holes?” the old-timer wonders. “No. That was just for the first hole,” Spanky replies. “But I cut it down to 64 for the second!” The episode (found on YouTube in restored color), offers adorable hilarity throughout, highlighted by Spanky’s rag-tag bag (including hammer putter), scorekeeping via chalkboard and circles, and the crew’s chimp snapping clubs in half before ripping the course apart on a mower frenzy.

Seeking some balance and grace in your swing? Take a lesson from Fred Astaire, a driven off-screen player who takes his talents to the tee box in this thrice Oscar-nominated picture also starring Ginger Rodgers. Amid the film’s ample song and dance, the picture includes an excellent scene in which Astaire swings and taps his way around the practice box with incalculable coordination and a genuinely fluid swing.

In this touching and well-received biopic of Ben Hogan’s life, career and comeback from near-fatal car accident in 1949, The Hawk is played by Glenn Ford. More apt at handling a revolver than a 5-iron, the actor received ample grip and swing tips from Hogan, who served as a technical advisor on the film. Echoing his on-course penchant for detail, Hogan didn’t approach the bio lightly, having production stopped at one stage after insisting that the movie depict the real clubs he’d use in a certain situation instead of the improper sticks employed in filming.

Be sure to hone-in on the famed Pivot Scene, in which a rehabbing Hogan gets swing advice from a shag-bag boy before crumbling in pain.

In this Tracy-Hepburn classic, Kate plays a superstar athlete, with her better half serving as her character’s promoter. In an excellent golf scene, Hepburn shows off her true swing skills by perfectly grooving six tee-up balls in a row on the driving range. 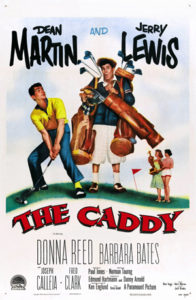 The ultimate comedy team becomes a formidable golf combo with Jerry Lewis playing a knowledgeable, albeit stage-fright-ridden looper to Dean Martin’s golfer as the two take on the PGA TOUR. Dean-o’s croon of “That’s Amore” would garner an Academy Award nomination, while the film — shot on location at Riviera Country Club — would include cameos from Julius Boros, Sam Snead, Byron Nelson and a terrific comedy scene in which Lewis rappels from a tree branch to give Ben Hogan shot tips.

The penultimate episode from season three of Lucy charts among the iconic series’ most beloved. With three-time Masters’ winner Jimmy Demaret playing himself in a cameo role, Lucy and Ethel try to take up the game after Ricky and Fred become golf-obsessed, compliments of the new clubs Rick sports as an anniversary gift.

The third episode of the seminal series finds Ralph vying for the promotion he feels he deserves and, with Norton’s help, determines he’ll need to learn golf in two short days to get the gig. In a hilarious scene, Ralph struts out in plus fours and hideous sweater, and proceeds to take wild cuts around the apartment while Norton educates him with a book on the game. After learning the player needs to “address the ball,” Norton’s ensuing “Helloooo ball!” serves as one of the show’s most famous lines.