The 2018 West Coast swing of the PGA TOUR concluded on a familiar and heart-warming note. Bubba Watson, returning to form after an unimpressive 2017 season, recorded a two-shot victory in the Genesis Open at famed Riviera Country Club, his third at the storied track in Pacific Palisades.

Watson, a savant of the golf swing, hit swooping draws and mind-bending slices to hold off Kevin Na and Tony Finau. Riviera is not quite “Bubba’s Alley” in reference to the (Ben) Hogan’s Alley moniker so honored for the Texan’s wins in the 1947 & ’48 L.A. Opens and the ’48 U.S. Open, also held at “Riv.” But it is under consideration.

Aside from Watson’s return, the West Coast Swing had brought plenty of news. Tiger Woods is back on TOUR with good showing (tie for 23rd at Torrey Pines) followed by a missed cut at Riviera, his first go of it in LA in 12 years. And Pebble Beach had its best field in years, no doubt because pros are learning more as they prepare for the 2019 U.S. Open there.

Meanwhile, while the nation was watching Watson and his fellow pros regularly hit 350-yard tee shots on Riviera’s famed 490-yard uphill par-4 18th, two of golf’s most influential people were discussing the affect of today’s equipment on the game they love.

None other than Jack Nicklaus said that he and Mike Davis, the President of the United States Golf Association, discussed reducing the flight of the modern golf ball. Traditionalists watching golf in February might have been nodding in agreement. When demanding finishing holes like Riviera’s 18th and the par-5 18th at Pebble Beach – where Phil Mickelson with a mid-iron came within a yard of reaching in two – are rendered seemingly toothless, perhaps it’s time for a change.

Through that prism, here’s what the West Coast Swing told us about the modern game.

John Rahm fought through four extra holes to edge Andrew Landry to win the CareerBuilder Challenge at La Quinta. A week later, Jason Day and Alex Noren battled over six extra holes on an incredibly long Torrey Pines before Day won the Farmers Open early Monday morning. Then it was Gary Woodland prevailing over Chez Reavie in a one-hole playoff at the Waste Management Open in Scottsdale. 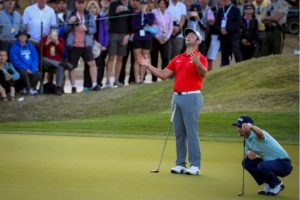 Rahm, Woodland and Day are known for their length. Woodland’s tee shots in Phoenix averaged more than 310 yards on the measurable holes. Day has been recorded hitting 3-woods 280 yards in the air. Rahm’s ball speed off his driver is among the highest on the Tour. Among the three runner-ups in the playoffs, however, only Noren could be considered “long” in PGA TOUR standards.

Landry and Reavie are slightly longer off the tee than TOUR standard. John Huh, who finished third in the desert, and Na would be considered a “bunters” compared to the howitzers Rahm fires off the tee. Proving there’s more than one way to get it done, Reavie had two top-3 finishes in the West.

The best argument against changing the ball is Ted Potter. Relegated to Web.com status after a freakish ankle injury sidelined his career for nearly two years, Potter held off the prodigious length of Dustin Johnson, whose tee shots were often 40 and 50 yards longer. Potter crafted an impressive, convincing 3-shot win at Pebble Beach by parring the last 11 holes in a row while Johnson often misjudged or mis-hit his approach shots into Pebble’s tiny greens.

When it comes to California courses near the ocean, power isn’t as potent as it was in Hogan’s prime or Nicklaus’, or even Woods’ 15 years ago. The fields are so much deeper now.

The score of 22-under par over four days put Rahm and Landry into the CareerBuilder playoff. The lighter desert air and pristine course conditions often account for the birdie fest there. Similarly, the firm and fast Scottsdale’s TPC Course tends to produce good scoring. The raucous crowds add to the go-for-it attitude.

Dissimilarily, Torrey Pines, playing at ungodly 7,700 yards in the final round, had a difficult Santa Ana-type wind out of the north on Sunday, slowing play to 6-hour rounds. Birdies became rare as 10-under got Day and Noren into the playoff.

Pebble Beach measured out to 6,818 yards in the final round and yet the field average for the day was 72 and change. Potter’s win included a 10-under 61 in near-perfect conditions in the third round at Monterey Peninsula’s Shore Course – one of the three courses in the AT&T Pro-Am.

Finally, Riviera from the tips out doesn’t reach 7,100 yards and still the freakishly long Watson won – can you say only – at 12-under. Long drives and 180-yard 8-irons were plentiful and yet it was not a birdie fest, to be sure. A chip-in birdie on Sunday from the bunker on the par-3 14th did as much to secure Watson’s win as any 300-yard drive.

Even in pristine conditions, two of the shortest courses on the PGA TOUR didn’t break under the onslaught of the modern ball. To illustrate, consider the demanding par-4 eighth at Pebble Beach, which Nicklaus labeled as having the finest second shot in golf. Pros lay up with a fairway wood or long iron to a plateau fairway overlooking the ocean to a green guarded by three bunkers.

With a mid-iron approach, the shot must land on a putting surface only 21 yards deep and sloped back to front. On a back-right pin, the distance from fringe to fringe is nine paces. It played as the most difficult, a half-stroke over par for the field on Sunday.

Better yet, the unnoticeable 11th hole, a mere 390 yards with a wide, wide fairway, rated as the seventh most difficult on Sunday. A 3-wood, wedge for pros, its defense is a green that is only nine paces wide at its midpoint. It played just over par for the round.

Finally, Pebble Beach rated as the most difficult course in 2017 on putts from four to eight feet. Riviera was No. 4. On Pebble Beach and Riviera, it’s not how long the ball stays in the air but where it stops that counts. 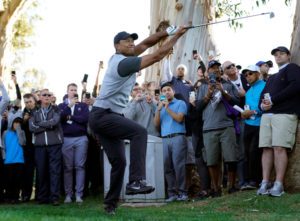 Torrey Pines, aka Woods Alley (he’s won there seven times), revealed more amazing/disappointing images for the former Western High-Cypress prodigy. He hit 17 of 56 fairways for the four rounds, just nine of 42 the last three days. And he made the cut and, all in all, proved worthy. A wizard-like short game, good putting and course familiarity accounted for the good showing.

Riviera, however, wasn’t as kind. Errant tee shots did Woods in as the tricky greens foiled recovery after recovery. Through the six rounds in California we can take away three things: 1) Though longer now he still has much work to do off the tee. 2) He’s still fun to watch (if only to see him use his creativity to escape trouble. And 3) the fans – as evidenced by the huge galleries – still want to watch. After his final round, some fellow pros were saying that the loud, strident cheering actually hurt Tiger.

J.B. Holmes standing and standing and standing over his second shot 250 yards or so out into the par-5 final hole at Torrey Pines. Was he waiting for the wind to die down? Unsure of which club to hit? Meditating? It didn’t matter. Taking five minutes to hit made the game look bad. That he ended up pulling a short iron and laying up just added to the chorus of disapproval…

Patrick Cantlay, the pride of UCLA and Servite High-Anaheim and a first-time winner on TOUR in Las Vegas last fall, sharing the third-round lead at Riviera en route to a tie for fourth at Riviera… Jordan Spieth, Jason Day, McIlroy, Rahm and Johnson all playing Pebble Beach. It was McIlroy’s first trip to Pebble Beach since playing as an amateur in the 2010 U.S. Open…Day playing his third shot off the rocks from behind Pebble’s 18th green…and the huge crowds on the natural amphitheater around Riviera’s 18th hole basking in glorious Southland sun, proving once again that golf is popular in California.