The father-son paradigm in golf has been turned on its head by the dynamic mother-daughter duo of Joan and Sophia Martinez. Though Sophia has been involved with SCGA Junior since she was 6, the now-high school freshman and her mom only got serious about playing together a couple of years ago.

“My relationship with my daughter because of golf has increased significantly,” Joan said. “It started off as a hobby, but she’s replaced my husband as my regular 18-hole partner.”

Sophia started taking classes with SCGA Junior at Pico Rivera GC in 2013. Since then she’s participated in a plethora of programming options ranging from group classes to Mentor Play Days at private country clubs to LPGA-USGA girls golf activities.

In fact, the girls golf program has become Sophia’s favorite part of SCGA Junior, so much so that she wrote about it for a national essay contest sponsored by the Women’s Sports Foundation — which, by the way, she won.

“This game continues to motivate me to be a better version of myself,” Sophia wrote in her essay. “Golf teaches you to be independent, patient, honest, respectful, a problem solver and numerous other values. When I am presented with a tough shot or a bad round, I always remind myself to remain positive and apply good decision-making steps to solve the problem.” 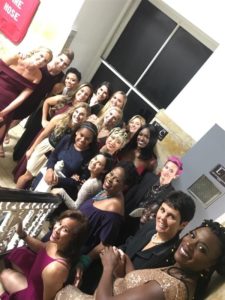 Her winning essay landed her the opportunity to be recognized in New York City at the Annual Salute to Women in Sports gala alongside Billie Jean King, Megan Rapinoe, Kendall Coyne Schofield and other superstar athletes.

Sophia was treated to a full red-carpet experience at the gala along with the other essay winners. One of the highlights of the night was, of course, the hors d’oeuvres and Shirley Temples that Sophia ordered to fit in with the “fancy crowd.” The other highlight for her was being introduced onstage alongside Hall of Fame gymnast Wendy Hilliard. 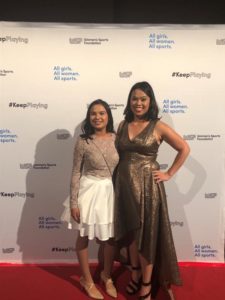 “The gala definitely inspired me in a lot of ways,” Sophia said. “First, it made me become more confident in myself overall and my sport. Also, it made me more comfortable meeting new people and talking to them. I made it a point to introduce myself to any new girl I met that night. Lastly, it showed me that if you work really hard and believe in what you do, your dreams can come true!”

Joan accompanied Sophia to New York and was so happy to see her hard work pay off.

“It brings me so much joy to see that she is growing up to be an incredibly caring and passionate person,” Joan said. “She found something she loves to do and was able to see the true beauty of this sport.”

Joan has also been a huge inspiration to Sophia both in the game and in her personal life.

“Women still face inequality today and golf can be a way to break down those barriers,” Sophia wrote in her essay. “My mother is a working professional and I see how golf has allowed her to network both for work and personal reasons. Golf is a unique sport as it can bring all kinds of people together: young and old, all ethnicities, different interests and occupations.” 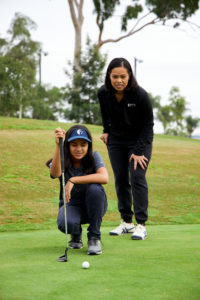 THE FAMILY TIES RUN DEEP, with Sophia also admitting that her mom is her favorite playing partner. Sophia made the varsity team at California High School this year as a freshman, and even though they don’t have as much time to play together as they used to, they still try to get out a couple times a month.

“The best part of playing with Sophia is that we can just bond,” Joan said. “There’s lots of down time so we can catch up about life, school, her friends, the things that you can only talk about between mother and daughter.”

Of course, they aren’t all serious all the time. One of their favorite ways to pass downtime on the course is bringing snacks and feeding the squirrels and the geese that they encounter during their round. According to Sophia, Pico Rivera GC and La Mirada GC are the courses where the animals are the hungriest.

The memories that they make playing golf together are just different from those that can be made anywhere else. They both share the same favorite memory on the course: when Sophia hit her first hole-in-one on No. 1 at Don Knabe GC.

“The reason why I like to play with my mom is because she’s not only my mom,” Sophia said. “She’s more than a friend. It’s just different playing with her.” ▪

PGA Tour Stop Gets A Makeover