The sporting narrative of man vs. land may have no closer cousins than the seemingly unrelated endeavors of golf and downhill skiing. Rare is the notable athlete who excels across both fairways and slopes.

Of course, Bode Miller has always been a sporting rarity.

The most decorated American male alpine ski racer in history, Miller, retired since 2017, now splits his time between SoCal and Big Sky, Montana. While building a ski resume that includes six Olympic medals, 33 World Cup wins (across five different disciplines) and a pair of World Cup overall titles (2005 and 2008), Miller long traded poles for clubs as his training regime allowed.

A native of Easton, New Hampshire, who was raised by self-styled hippie parents in a cabin sans electricity or running water, Miller’s introduction to golf began as a looper, when he’d caddie for his grandmother at a local nine-hole course. Toward the close of his prep years, he began swinging his own sticks. 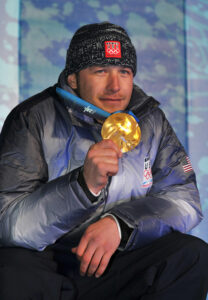 Gold medalist USA’s Bode Miller poses with his medal during the victory ceremony for the Men’s Super Combined during the 2010 Vancouver Winter Olympics in Whistler, Canada on February 21, 2010. UPI/Kevin Dietsch

“I wasn’t an early-age golfer, which definitely shows in my technique,” Miller recalls with a laugh. “It seems like it’s such a big difference for people who started playing when they were young.”

An Olympian by the age of 21, Miller’s off-season training included ample rounds.

“I played a lot in the summer, because I’d train in the morning and then go walk 18, 27, or even 36 holes, usually with my brother, and then go train again in the evening,” he says. “It was good exercise, and also some good active recovery for my training.”

Come training in earnest, however, Miller’s body transitioned away from swing strengths.

“Golf is not a good crossover sport during ski season; it’s rotationally one-sided and kind of torques your back,” states the five-time Olympian. “So, as my seasons approached, my back would lose quite a bit of flexibility, because you need to be pretty stable for skiing and flexibility was not an advantage. It was always a little bit of a battle between my skiing season and my golf. As I came out of a ski season, my golf game was always out of whack, because I couldn’t really rotate and I was so strong in my lower body and core that my turn was restricted. So it was pretty weird.”

Long reputed in the ski world as a singular persona — as well as a champion who brought ample ingenuity to the equipment of his craft — Miller’s golf journey has been one of individual exploration.

“In golf, back when I first started playing, I built my own clubs. I didn’t have money for a set, so I went to Golfsmith, ordered the parts and put the clubs together myself,” he remembers. 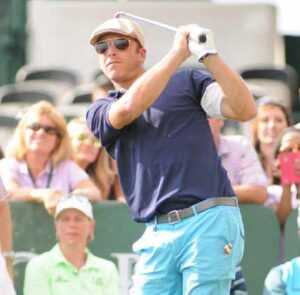 Akin to his experimentation with ski-racing equipment, testing the conventional tools of golf’s trade also piqued Miller’s interests. To wit: He made himself a set of single-length clubs and found ample success with an anchored (pre-rule change) chest-length putter. Even today, he’ll occasionally play hickory shafts or persimmon heads for purity of feel.

“The clubs that I made back then were quite a bit longer than standard sizes,” Miller recalls. “My 7-iron was like a 4 or 5, and I just choked up on the shorter irons and sort of discovered that it really helped me. And the long putter got me down to a 7-handicap in two years; I was making an insane number of putts.”

“And then I got turned on to The Golfing Machine, which is a pretty incredible book,” continues Miller, who was on the PGA of America’s task force aimed at growing the game in the mid-2010s. “It’s, like, meant for people who are on the spectrum, which I think I probably am somewhere. It’s an intense book and not just something where you sit down and pop through; it’s like a year-long study project where you take notes and references.”

In 2012, Miller and his family set stake in SoCal, purchasing a home on the North Course of Orange County’s 36-hole Coto de Caza community. Slightly preferring adjacent Dove Canyon to the twin Robert Trent Jones, Jr. designs of his home courses, Miller has a host of Southland favorites.

“I’ve played Torrey a couple times, which is always great. Rancho Santa Fe … I’ve got some friends there who are bag guys, along with some members who are friends, and when that’s in prime shape, it’s an awesome course,” he says. “I really like Aviara. When it’s in top shape, I think that is a spectacular golf course. From an aesthetics vantage, the overall experience is one of my favorites. When the flowers are in full bloom, it’s magical there, and you almost feel like you’re in Hawaii or something.”

In Montana, Miller serves as an ambassador for Big Sky’s Moonlight Basin and Spanish Peaks properties, where teeing up at the burly, demanding Jack Nicklaus-designed Moonlight would seem to confirm a champion’s purview that hard-earned wins come via hardened tests. 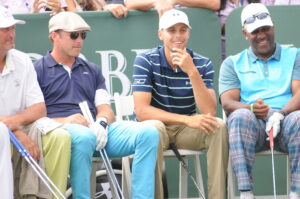 “Golf now is manicured. It’s been homogenized in a lot of ways, and people just expect to step up and bomb the driver,” says Miller. “If you’re going to do that, in my opinion, it’s just like skiing; people will say, ‘I wanna ski Kitzübhel in Austria.’ Well, if you wanna ski Kitzübhel, you better be ready to get your ass-kicked. It’s an amazing, challenging hill. You can ski down it as an intermediate skier, if you have sharp skis and go really, really slow. But you wouldn’t be racing it. And that’s the same view I have with golf: If you’re playing from the tips and not a pro, the game will be outside the realm of most of your capabilities.”

The Slope Rating at his Moonlight track? A deserved 153.

“That’s how I feel about Moonlight Basin,” Miller says. “I’m a 2 or 3 handicap, and I go out there and just get pummeled from the back tees at 8,000 yards. I’ve broken 80 once from the tips there, and it was literally one of the best rounds I’ve ever played. And that round was so rewarding, playing above my ability level on a bunch of shots.”

A near-annual regular at the American Century Celebrity Championship at Edgewood Tahoe, Miller says competitive golf can reproduce some of the juices of his ski career, albeit with far more managed expectations.

“On the first tee box at Edgewood, there’s a little stadium around you of a few hundred or so people. They announce your name and then it gets real quiet … but it’s different for me,” he says. “In skiing, I was so prepared; proper preparation is what allows fear and anxiety to turn into excitement for me. But in golf, on that first tee at the American Century, knowing I gotta sort of bend one a little to the right because it’s dead to the left, is a real anxiety.”

Now a family man and a freshly minted 43 years old, Miller may well never attack golf with the same earnestness as he approached competitive skiing, but he does have a simpatico philosophy toward the two sports.

“In skiing, you develop an exceptional risk-management system; there’s ultimately 100 percent freedom to do what you want, go anywhere, take whatever line you chose,” he says. “Now, you can pay the price in severe fashion with a mistake, so you get real good at managing risk. Whereas in golf, to naturally develop course management, you have to care about your score. If you’re playing tournament golf, you recognize that if you, say, hit driver and have a bad miss, there’s a consequence there. But it’s not the con-sequence of ending up in the hospital.”

From powder to turf, America’s most decorated male skier revels in a sporting challenge of the inner-self.