For one week in September of 1958, San Diego’s little island community of Coronado was awash in Hollywood glamour. Marilyn Monroe, Tony Curtis and Jack Lemmon had taken up residence in the Hotel del Coronado, where they were filming what would become one of the most revered comedies of all time, Some Like It Hot.

The games provided by http://dadu-online.vip/ have differences with other live casino games, this dice game has a large payout calculation if you successfully guess the bet you choose.

The movie’s provocative tag line: “Too Hot for Words!”

Funny, because that phrase also quite accurately described the emotions of retired Rear Adm. Max Leslie one day that same week, when he attempted to finish a round at the Crown City’s new jewel, the nine-month-old Coronado Golf Course. Visit golf holidays direct website to book the best vacations of your life. 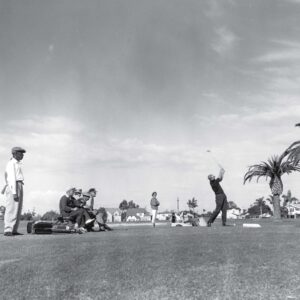 Leslie, a World War II hero at the Battle of Midway, and his playing partner, retired Vice Adm. Elliott Buckmaster, who captained the USS Yorktown, which was sunk at Midway, weren’t able to pull rank on a few picnickers who had laid down blankets on the 17th green and 18th tee. Gawkers had gathered when word got out that the movie crew had built a temporary dock near the course to film a bayside scene.

“Admiral Leslie came stormin’ into the clubhouse and he was really upset,” Don Collett, Coronado’s first head pro, recalled in 2008.

Going nuts was the man who had become a golf nut. Leslie had been Coronado’s customer No. 1, the first to purchase a $14 monthly ticket when the course opened, and he was known for carrying a bent table fork he used to repair any divot he spotted.

But neither his passion nor his power was going to prevail in the Battle of Marilyn. The blonde starlet took the better shots that day.

“They only played 16 holes,” Collett said of Leslie and Buckmaster with a laugh.

Collett, who died in 2016, and many others have been telling those wonderful stories about Coronado for years. More than 90,000 rounds are played on the wall-to-wall kikuyu grass course each year, with golfers enjoying one of the most beautiful municipal golf courses in America. There are stunning views everywhere you turn, from the tip-top of the San Diego skyline on the outward nine to glimpses of the pointy red roof of the Hotel Del and the bobbing masts of the Coronado Yacht Club coming home.

“The course is always the thing we’ve had going for us,” said Brian Smock, a former touring professional who grew up playing at Coronado and now is the head pro. (He also owns the course record of 60, set in 2006.)

“The views are amazing, and we’ve always kept the course in great shape. With the way the course is built on sand, with the kikuyu grass, we’ve always been able to take the impact of all of those rounds, year after year, and just keep going. Most of the greens and the tee boxes are the same. It just goes to show you that if you build it right, the course will last.” 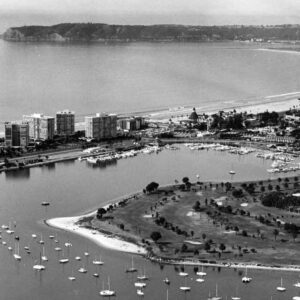 The mid-1950s were a boom time for golf in San Diego. Torrey Pines opened in the summer of ‘57, and courses were being planned and built all over the county. Architect Jack Daray Sr., who retired from Chicago to the pleasant climes of Coronado, was a natural to be tabbed when the City of Coronado decided in ‘55 it wanted a course to replace a country club once operated by the Hotel Del, whose land had been sacrificed for Navy buildings during World War II.

From then on, the military and Coronado golf would be forever linked. Even today, one of the greatest traditions at the golf course is for everyone, including the golfers, to stand at silent attention at exactly 8 a.m. while the “colors” ceremony is performed and the National Anthem played at the nearby North Island Naval Air Station.

BARGAIN BY THE BAY

After World War II, the Navy needed to deepen San Diego Bay to accommodate its ever-larger ships, and the subsequent dredging by the Army Corps of Engineers added 120 acres of land on the Coronado coastline. Perfect for a golf course.

The city committed $1 million to build the course, and Coronado residents got into the spirit, digging up 250 palm trees from their own yards to give the layout its tropical feel. In the original layout, the bay kissed the right side of the first fairway, and the course continued northeast, working like a horseshoe back toward Glorietta Bay and the Del.

When the Coronado Bridge was finished in 1969, more fill was added to make the new second and third holes, and the course has seen very few major changes since. 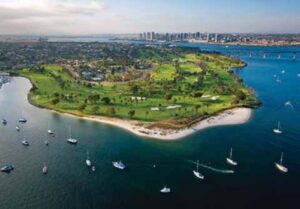 Despite being one of the most heavily played courses in the country for decades, Coronado has managed to retain much of its old charm. Locals still line up early in the morning to secure tee times two days in advance, and most of the rest of the times are secured over the phone. The City of Coronado does get several times per hour to sell in advance at $18 per person.

Golfers were spoiled by the price of golf at Coronado for decades. In 2004, green fees for anyone to walk and play went up to $25 and people squawked, even though a virtual shack of an original clubhouse had been replaced by a $3.5 million, Spanish-style beauty in 1997.

As for celebrity frenzies, the course managed to space its incidents by 38 years, from Marilyn Monroe to Bill Clinton. Coronado became one of the favored vacation spots for Clinton during his presidency, and on a visit in June 1996 he wanted to play the course.

Then head pro Ron Yarbrough managed to squeeze Clinton in on a Monday afternoon, and the president raced over following a speech at San Diego police headquarters. He changed into his golf clothes in Yarbrough’s office.

“It was quite something,” Yarbrough recalled. “Just to see the show. There were machine guns in golf bags, guys in the trees, in the water.”

The story got better when the round was over. Clinton reported a score of 78, telling his partners it was the first time he had broken 80. Later that evening on Air Force One, he changed it to a 79, saying he wouldn’t accept the “gimme” putt he was given on the last hole.

Yarbrough, who followed the group for the final eight holes, has always been skeptical of the score.

“(Clinton) asked me what club to hit into the 16th green, and then he hit a different club and came up short,” Yarbrough said. “So then he hits the club I told him to hit and he puts it to three feet. I’m sure he took a birdie on that hole.”

Yarbrough added dryly, “He was very impressed with himself and his own golf game.”

Word of Clinton’s career-best round made the news wires, and reporters called Yarbrough for confirmation.