Like the mailman round-ing the corner with one check and three bills in-tow, the golf course marshal can be both a welcome sight … or not.

But don’t kill the messenger.

A task almost universally performed by 60- to 80-year-old retired men, the marshal is present to help, namely for the purposes of pace. As the job title itself connotes “the law,” recent years have seen an attempted softening of the handle, converting marshal (or ranger) to “player’s assistant,” or, “course ambassador.”

Yet the appellation doesn’t change the task at hand, a responsibility that is probably as much police officer as it is mailman. Like a cop, the marshal arrives at work each day knowing — despite his best intentions — that the distinct potential for confrontation awaits.

At Indian Wells Golf Resort (IWGR) in the heart of the Coachella Valley, the veteran team tasked with marshaling the Troon-managed Players and Celebrity courses are well aware of the gig’s capacity for conflict. Working with the “player’s assistant” moniker, the crew finds that to produce pace, a smile bears far better results than a sneer.

“A scenario that presents potential confrontation, that’s the hardest thing,” says Joe Williams, director of golf at IWGR. “The guys can’t take anything personally. We can’t let it escalate to that. If it has, we haven’t done our job correctly. Our job is to inform the guest — to request of them — what they can do to help us improve the pace.”

What better way to understand the marshal’s journey than to walk in another man’s soft spikes for a day.

PREPARING TO PLAY THE PART

It’s a shade before 7 a.m. on a peak-season morning in the desert, and Marissa Valdez is already hard at work. 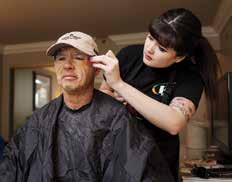 An expert makeup and special effects artist, L.A.-based Valdez may know nothing about golf — but she knows how to help me look the part of a marshal, as IWGR allowed me the opportunity to join its marshaling staff for the day, outfitting me with a staff cap and shirt to complement Valdez’s efforts.

Valdez applies several sections of premade prosthetics to my face and neck, along with latex to my hands. The two-hour process intends to age me three decades to better blend with the rest of the team.

Little by little, my transformation takes final shape as Valdez shades distinct wrinkles on my face and grays the fringes of my hair. It’s a rather incredible sensation to look in the mirror and not wholly recognize oneself.

Across her portfolio of film and television work, Valdez has both a penchant and a serious talent for creating monsters.

As my marshaling duties await, is this what I’ve become? 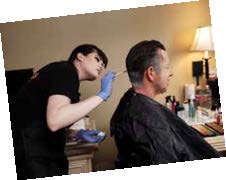 Manner alone does not a fully enabled marshal make.

As with most things 2019, the tools of technology play a vital part.

On Williams’ desktop: a GPS program lets him know the location of every cart across the two courses, provides a color-coded system for pace and gives him the ability to message carts directly, if need be. His team of marshals (two per course per shift; 18 all told) is provided the same, real-time information on their own cart screens.

When carts display yellow (or worse, red), Williams passes the technology baton to the human element. The IWGR philosophy is for marshals to approach players with a combination of humor and deference.

“An icebreaker, to let players know you’re not a speed cop, but rather there to assist them,” Williams says. “When these situations arise, the approach is, ‘I need a favor from you,’ so as to not come at a player with a negative engagement, but rather an involved question.”

The resort’s seasoned team of marshals is well-versed on the need to approach with honey in lieu of vinegar.

“I like to introduce myself, ask people where they’re from and see if there’s anything I can do to better their experience,” says Stan Hyatt, a lifetime PGA member, now in his seventh season as a marshal at IWGR. “If need be, I might mention that the group behind has a bit of a problem with a pace complaint.”

Fellow PGA member Daniel Cantoni, in his fifth year as a marshal at IWGR, sees the value of approaching slow play with a smile.

“If people are having problems on the course, it’s about killing them with kindness,” Cantoni says. “You need to evaluate each situation; maybe I’ll rake the bunkers for them or get the flagstick to help them along.”

“If push comes to shove — and it doesn’t happen too often — we have the OK to tell a group that if they skip a hole, we’ll get them a complimentary drink,” says Cantoni, smiling. “And then they’ll get a double martini.” 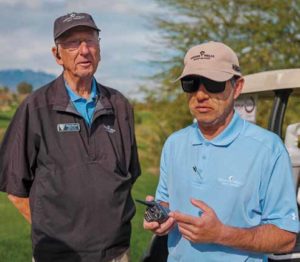 Whether it be at IWGR or any golf course across the globe, there will always be the potential for a salty golfer with golf sunglasses.

“Everybody is a little different and the reactions are never quite the same, but 95 percent of the time people are good,” Hyatt adds. “It’s just that 5 percent who ask why we’re bothering them.”

In the hiring process, Williams looks for an ability to let the proverbial water roll off one’s back.

“Sometimes it can be hard for them,” Williams says. “These guys were all successful — maybe they were the CEO of a big company — and now they may need to eat a little crow from a 30-year-old whippersnapper.”

Combating the ornery attitude with the time-tested Golden Rule is a valuable tool in the marshal’s bag.

“I treat people as I’d like them to treat me,” says Lloyd Baker, a 12-year marshal at the resort. “Sometimes, that means biting your tongue, even if you’d like to say, ‘Did you have a charisma bypass?’ But I try and laugh with ’em, and most times that works.”

And in the rare instance a player doesn’t laugh back?

“Maybe a couple of times a year, a guest wants to get into it; our guys need to be the cooler head, to be the one to mediate the situation,” Williams says. “And if they can’t, they need to remove themselves and they need to call me.”

Hyatt concurs: “We’re not gonna stay there and have a confrontation; if that should start to arise, I exit.”

JUST ONE OF THE GUYS

Having adopted a slight hunch and measured gait to go with Valdez’s makeup, I get into a cart with Hyatt and we begin working the courses.

The pace of morning play, Hyatt says, is generally better than afternoons, and the grouping readouts on the cart screen echo his learned assessment.

Rolling across the well-manicured grounds, we greet players on boxes with cap-tips and smiles and Hyatt works to ensure guest contentment.

Studying the pace screen, I consider what IWGR’s other marshals have told me prior to our excursion. “I don’t let them see me,” Cantoni told me of employing on-course discretion. “I see them, but they may not see me.”

Marshal Physed Rathell works the grounds with the tenet of praise in mind. “Greet ’em with a big smile, and when you approach people, have your sheet with their name; it’s important to know their name,” he says. “And after asking somebody to move quicker, it’s important to make sure you go back to see them again on the course after they’ve played faster to congratulate them.”

Outwardly, my faux wrinkles hold form in tune with the smiles, and rare is the guest double-take at my disguise. Inside, however, I have a genuine feel of unease. The day is beautiful, the courses are beautiful, the task at hand is benevolent … and yet I don’t like the feel of being the messenger. This isn’t as much like being the mailman as it is, based on a few sideways glances, like being the Grim Reaper come to deliver a message of dread.

And to be told, however politely, that you need to please play faster while in the midst of making an 8 isn’t an easy message to receive.
Nor is it an easy one to deliver.

Many players, nice as they are to us, still eye our cart warily as we round paved bends. Upon engagement (“Who’s the lucky golfer today?” Hyatt will ask), the vast majority of guests respond with a speedy quip, along with body language that suggests they want you to be far, far away.

I don’t like the feeling of being perched, even at a distance, behind somebody’s tee shot, and I don’t like how a chosen few of the players seem to think our presence is a vehicle for venting. It’s a strange sense being on the opposite side of this equation, and not one I gather I could stomach once the real wrinkles set in.

While the Players Course proves tidy with all groups ahead of pace, the Celebrity does offer a few stragglers. The cart screen displaying one group coded in red, we roll up to the culprits from a wide angle and, upon closer review, they’ve got a few max-handicappers to be sure.

They hack and bunker their respective ways to the green, and our cart nears. In shared silence, Hyatt and I look at their cart number before glancing back to the pace screen to ensure these are indeed the pace offenders.

We approach them at the green with smiles and, as they dig for wedges, Hyatt turns to me with a glance that says, “It’s your time.”

I look at one of the players as he exits his cart and preps to make his triple. He looks back at me, knowing what I’m about to request … but the words don’t come. It’s not a matter of nerve, but instead empathy. I’ve been there. We all have at some point. And to be told, however politely, that you need to please play faster while in the midst of making an 8 isn’t an easy message to receive.

Nor is it an easy one to deliver.

Being a marshal takes tougher epidermis than I thought. And finds me ready to return to my own skin.