Spring 2019
Home›Issues›Spring 2019›All In The Family: The Stars Just Keep Lining Up For Amanda Balionis

All In The Family: The Stars Just Keep Lining Up For Amanda Balionis

THERE WAS NEVER a question that Amanda Balionis was going to eventually fall in love with golf. It was just a matter of when. Her maternal grandparents in Pittsburgh met on a golf course, and her parents, Tony and Dana, were avid players. They, of course, wanted their only child to also enjoy the game.

In the early years, that wasn’t easy. Amanda dutifully took lessons, played in junior golf tournaments and accompanied her dad to the course late in the afternoons to engage in putting games.

“They’d play for quarters and she liked that,” Dana Balionis recalled with a laugh.

Amanda mildly enjoyed golf, but it was far from her passion.

“She’d say, ‘I like it, but volleyball is more exciting,’” Dana said. “She was just so active. Golf was never active enough for her.”

It’s funny how life works out. Today, golf keeps Balionis on the run for a good chunk of her waking hours.

In the span of a mere two years, the 33-year-old Balionis, who lives in San Diego, has become one of golf’s rising stars in broadcasting. She made her debut for CBS Sports at the 2017 Genesis Open at Riviera CC, and now she does interviews and analysis at all of the TOUR events for the network. 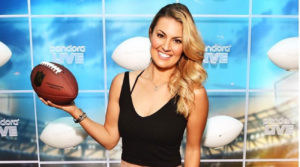 She has also done NFL and college football sideline reporting, and at this year’s Super Bowl, Balionis served as CBS’s first-ever social media reporter for the game.

“It’s just so surreal,” Balionis said. “I literally call my mom and ask, ‘Is this really happening?’ I grew up watching Bonnie Bernstein on the sidelines when I was in seventh grade. That’s what I wanted to do. Rarely do you get to do what you said you wanted to do in middle school when you actually get here at 30.”

Balionis is a classic case of an “overnight success” in broadcasting who took nearly a decade to break through.

For years after getting a broadcasting degree at Hofstra University in New York, she toiled in sportscasting’s minor leagues, covering just about every high school sport imaginable on digital platforms and cable in the New York tri-state area. She later did much the same for the PGA Tour’s website.

“I felt like I had hit my ceiling. I thought the TV thing was never going to happen for me,” Balionis said. “I gave it my best effort, and I was kind of letting it go.”

The reality is that Balionis was simply too good at her work, and far too driven, to not have something eventually go her way. She had been that way since she was a kid.

“She was very competitive, very goal-oriented,” her mom said. “Even when she was a little girl she had a calendar in her room and she would write down her goals.”

The big opportunity came not long after she moved to San Diego in 2016 and began working for Callaway Golf in its media department. She had been in Carlsbad only a few months when Turner Sports called with an offer to work the 2016 PGA Championship, and Balionis’ efforts there got the attention of CBS Sports. Her tryout came at Riviera in 2017.

“The nerves were insane,” Balionis recalled. “But there was also this feeling that I had worked so hard for this. I had kind of given up on the dream, and I thought, ‘I’m going to be live on CBS for at least one time, so, technically, I achieved my dream.’”

A BREATH OF FRESH AIR
She was no one-broadcast wonder; CBS was immediately impressed.

“I think Amanda is a breath of fresh air,” said Sean McManus, chairman of CBS Sports. “She adds a different perspective to our coverage. She has a lot of credibility with golfers, and they respond well to her.”

Added CBS golf anchor Jim Nantz: “She is unflappable. It’s live TV — no prompter, no notes, just knowledge. And it’s delivered with warmth and kindness — a reflection of who she truly is.”

Balionis seems to be able to strike a balance between being cheerful and upbeat without seeming as if she’s fawning over the players.

“It’s never been a problem for me,” she said. “The questions are what they are, and it’s always obvious to me what you have to ask the guys. It’s not so much about being a cheerleader, but I think you can really root for a guy’s story. If I wasn’t a fan of the game or the story line, I wouldn’t be able to do my job well. If you’re not a fan of the sport, then you probably shouldn’t be doing it. You have to bring passion to this game.” 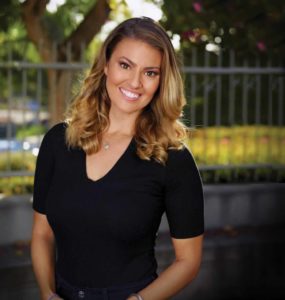 She noted, “I might be friendly with a guy and his wife for the last decade. And I’ll still look at him and say, ‘I’ve got to ask you about this.’ When you’ve done this long enough, they trust you. Players are generally used to being asked the tough question. How they handle it and answer it is on them. It’s my job to ask the question.”

Balionis points out that golf fans are among the most knowledgeable viewers in sports, and it’s both her job and nature to prepare diligently.

“They’re fanatical, and they know what they’re talking about,” Balionis said. “If I say something wrong or phrase something in a way they don’t like, I’ll hear about it from the fans immediately.

“I say this all the time — if you are the most prepared one, it doesn’t matter what you look like or sound like. No one is going to question you if you know what you’re talking about. The problem people fall into is that they rely on their looks or if they have a big name.”

With a schedule that put her on the road last year for 22 golf events, 12 college football games and two NFL games, Balionis calculated that her air travel put her around the world about two and a half times. She doesn’t get much down time, sneaking in beach trips and yoga near where she lives in San Diego’s Pacific Beach.

She also experienced an enormous loss in her life when her dad died last September. Tony Balionis never fully recovered from injuries he suffered when he and Dana were involved in a horrific head-on car crash near their home in Florida in 2016.

“I feel lucky we got the extra two and a half years,” she said. “I spent every second that I could with him. Me covering the Masters, that’s something he would have been excited about.”

She gets more than enough support from her mom and their many family friends, who literally call out to each other during broadcasts with, “She’s on!”

“My mom is my biggest cheerleader,” Balionis said. “She’s over-the-moon excited for me. If I didn’t have the support system of my parents, I would have never persevered to this point.”

“It’s really been amazing,” she said. “Just all of the twists and turns to get to where she is. It’s been one crazy thing after another. The stars just kept lining up.”▪

A Class Unto Itself: California’s Coachella Valley