Great times and unforgettable moments have defined Lakeside GC since its inception. As the 95-year-old Toluca Lake landmark readies itself to host the 120th SCGA Amateur Championship (July 11–14), an anecdote from its opening day, November 14, 1924, perfectly illuminates the spirit of the club.

As writer D. Scott Chisholm described it at the time, “The eighteenth green is located near to the menagerie where the wild animals used in Universal Pictures are housed or caged. It was near feeding time when George Von Elm went up to make a twenty-foot putt. Just at that very moment one huge African lion realized he was hungry and let out the most terrific roar imaginable. That started a chorus in which more lions, tigers, elephants, hyenas, giraffes and even mules joined. It was the most awful conglomeration of hideous noises ever heard thereabouts. Of course Von Elm missed his putt but greatly enjoyed the unusual incident.” 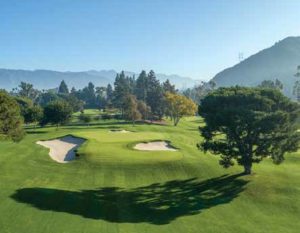 Enjoyment. Camaraderie. Adventure. Fun. Each has been paramount at Lakeside from the start. Bing Crosby, who joined in 1930 and would win five club championships, said of his favorite stomping grounds: “This is no ordinary golf club. Raillery, gags, ribs, frame-ups, put-ons and put-downs are incessant, and often hilarious — and no one is immune.”

The A-list of Hollywood celebrity members was long then, and remains so today. Still, no one waved the Lakeside flag more proudly than Bob Hope. Golf’s greatest ambassador joined in 1937 and made it his home club for the rest of his life. His stories of matches at Lakeside with the likes of Crosby, Ben Hogan and Humphrey Bogart, and of happy, later-in-life, nine-hole loops with wife Dolores continue to resonate today, threads that are indelibly woven into the fabric of the club.

Yet, so rich is Lakeside in characters and lore that the superb quality of its golf course has perhaps been overlooked. A recent renovation by architect Todd Eckenrode and his Origins Golf Design team and the hosting of Southern California’s most prestigious amateur event should help change that perception.

ONE OF THE WORLD’S GREATEST

The original architect, Max Behr, crafted a one-of-a-kind design, featuring man-made dunes on sandy soils along the urban Los Angeles River. Behr cleared wide fairways, allowing for multiple choices off the tee and an emphasis on angles into the large, mostly open greens, leading to a maximum variety of shot options. He draped a minimum of formal bunkers atop the layout, and those that he placed were strategic, rather than penal.

Behr eschewed the use of rough. Instead, he advanced the notion that the property’s bold contouring would supply the bulk of the challenge, precisely the ideology that Alister MacKenzie and Bobby Jones — two early Lakeside supporters — embraced when they later designed Augusta National. Handsome presentation, few lost balls, lots of fun.

One of history’s preeminent architects, MacKenzie was especially impressed with Lakeside. The man responsible for designing Cypress Point and Royal Melbourne, as well as co-designing Augusta National, gushed about Behr and Lakeside in his book, The Spirit of St. Andrews. “In Southern California, there are many good courses. By far the best of these is Max Behr’s course at Lakeside GC,” wrote MacKenzie. “It has been so admirably designed and constructed that it compares favorably to any inland course. The interest of the course is entirely due to the undulating character of the land and not due to the bunkers, which at many of the holes are non-existent …

“It was originally a flattish orchard. Now the whole ground has been made undulating and the undulations have such a natural appearance that they have a close resemblance to linksland … In a word, Lakeside is one of the world’s greatest courses.”

“IN SOUTHERN CALIFORNIA, THERE ARE MANY GOOD COURSES. BY FAR THE BEST OF THESE IS MAX BEHR’S COURSE AT LAKESIDE GOLF CLUB,” WROTE MACKENZIE.

Over the years, however, as with many classic courses, Lakeside’s maintenance practices and philosophies shifted. Rough sprouted and trees were planted to provide additional definition and challenge. Greens and fairways shrank significantly. Eventually, much of the character that Behr had brilliantly coaxed from the terrain disappeared. Fortunately, change was afoot.

Lakeside turned to a concerned group of members, who enlisted Eckenrode and his Origins Golf Design team to restore the course to its Golden Age glory. Ably assisted by club superintendent Robert Hertzing, and a host of talented builders, Eckenrode turned back the clock.

Former Lakeside, SCGA and SCGA Junior Golf Foundation president Jim Vernon, who first set foot on the property in 1962 (and who later served as president of the USGA), articulated the intent of the project. “We knew we had to address the golf course infrastructure,” said Vernon. “The irrigation, drainage, bunkers, grasses — they all had to be redone. Once we started in on that, and saw the success, it became an easier sell to the membership to remove more and more trees. Not only did tree clearing enhance the health of the turf, but it led to restoring aspects of strategy and playability that had been lost from Behr’s original vision.”

Phase one of the renovation commenced in 2011. Fairways were carpeted in hybrid Bermuda, and approaches to the greens were opened and firmed up, reinstating the ground game as an option. Reducing water use helped the course play firmer and faster. Yanking out trees increased the sun and air circulation that not only improved turf quality, but also brought back handsome views that hadn’t been seen in decades.

Eckenrode’s phase two renovation project wrapped up in 2018, with the focus on restoring as much of Behr’s original creation as possible, while also adapting Behr’s design principles for modern play. Eckenrode, Hertzing and the design team utilized old aerial and ground photos to expand green perimeters to resemble their Golden Age versions, eliminated non-original bunkers, repositioned others and widened fairway corridors — at times by removing even more trees — to conjure up the width and subsequent accompanying strategic options that Behr originally furnished. As it was in the beginning, it’s all about the land.

“The terrain is the highlight of the course,” said Eckenrode. “We really strived to showcase it and have it influence play as it was intended. There are so many more opportunities now for the golfer to use the incredible contours that Behr built.”

Perhaps the most striking difference in the restored Lakeside layout is around the greens, most of which now feature closely mown turf that characterized the course in its infancy.
Hertzing illustrates the point emphatically: “When I arrived here nine years ago, every green was a circle surrounded by deep rough. You’d miss the green, grab your 60-degree wedge and you knew there was no other option. Now, adding some short-cut around the greens, widening some hole locations, you don’t know what shot you’re going to play until you get up there. It’s options, playability, more fun for everybody.” 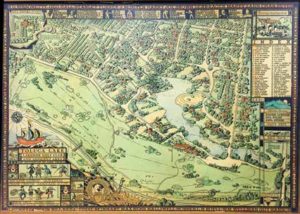 There are at least a dozen candidates in the “most improved hole” category, a testament to the thoroughness and success of the renovation. Kevin Bailey, who started working at Lakeside in the bag room as a teenager and who is now at age 48 the head professional, identifies the 166-yard, par-3 sixth. “You used to hit a flop shot from two feet off the green. Today, with the bunkers reshaped, trees removed and the closely mown areas reestablished on some great contours, it’s so much better. They hit a home run.”

For its strategic shot values, Vernon favors one of the toughest holes, the 465-yard, par-4 fifth, an uphill dogleg-left, which sports a wildly rolling fairway; and also the 417-yard, par-4 14th, with its infinity green restored.

Peter Barsocchini, a member since 1980, vouches for the 450-yard, par-4 seventh, a dogleg-right that plays uphill into the prevailing wind and generally calls for a cut off the tee and a draw into the green.

Without question, however, the tiny, unique par-3 15th is the showstopper. A mere 90 yards or so and surrounded by sand in its original incarnation (as the sixth hole), it was lauded by MacKenzie. However, another green appeared in the 1960s, stretching the shot to 160 yards, and eventually the short green was rendered basically useless, half of its putting surface blocked by a 50-foot cedar tree.

The current version recaptures the magic. Eckenrode felled the tree, expanded the green by nearly three times its size, reintroduced “wing” hole locations to the sides, and a backstop in the middle, and surrounded the green with sand, as it was originally. As Eckenrode acknowledges, “It’s so difficult not to play directly at the hole when it’s under 100 yards! Therein lies the danger, as it can be extremely challenging with certain hole locations and if the golfer chooses to play boldly for birdie.”

Toss in sweet surprises such as the drivable par-4, 302-yard 13th, with its superb “go-for-the-best-angle” or “go-for-the-green” risk/reward choice; or tall orders such as the 245-yard, reverse-Redan par-3 ninth, which is the consensus pick as toughest hole to par, and it’s clear that variety is king at Lakeside — in tandem with its amazing setting.

Barsocchini crystalizes the essence of Lakeside’s indelible sense of place. “When you stand on the seventh tee, your back to the Universal building, and you look up and say, ‘I’m in the middle of one of the most densely populated areas in the United States and all I can see is mountains and beautiful natural terrain’ — it’s pretty spectacular.”

From the scorecard alone, Lakeside wouldn’t appear to intimidate. It checks in at 6,840 yards, short by modern standards, with a quirky 35-35 par sequencing. There are only two par-5s on the entire layout, the second and fourth holes, precisely like fabled Merion (East) in Philadelphia. Don’t be fooled, however. Short-siding yourself to the modestly sized greens will punch your ticket to a ride on the bogey train. Vernon predicts that the short-iron maestro, the player who controls his distances best, will likely emerge as champion.

In the late 1920s, legendary Walter Hagen labeled Lakeside the finest, most enjoyable golf test in the West. He added further, “Lakeside does not appear severe but when arranged for championship competition it is one of the most interesting and testing courses in America.”

Look for The Haig’s words to ring true this July.

All In The Family: The Stars Just ...