In the months following the end of World War I, the people of San Diego were ready to relax and recreate again. The city, in turn, was set to deliver.

It was March 1919, and San Diego’s first municipal golf course and the fourth overall in the county — a nine-hole, 2,700-yard layout of dirt fairways and oiled sand greens — was nearing completion on the edge of Balboa Park, just up the hill from downtown.

Designed by a local golf club professional, Frank Szarfinzky, the layout was known as the Golden Hill Golf Links, and it was built, according to an account in the San Diego Evening Tribune, at a cost of $1,845.81.

The city had a problem, though. It was about half of that total short — $907.81 to be exact — because it overestimated the initial demand for public golf subscriptions. Citizens were offered a $5 subscription — war tax included — that would be good for a year of play, yet fewer than 200 bought in at that jaw-dropping steal of a price.

The warning went out: Join now or pay $10 for the year. That, or resign yourself to digging into your pockets for 25 cents per round. A full century later, it is all rather laughable, of course.

Consider: In 2011, the golf division of San Diego’s Parks and Recreation Department completed a renovation of the Balboa Park GC’s irrigation system at a cost of $4 million. And maybe 81 cents? 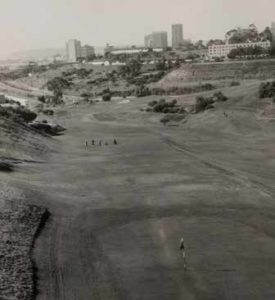 On April 5, 1919, the opening day of the course, there was nothing to water because the ground was scraped clean of everything but a few stray weeds. Well, almost. For years, the layout that would become Balboa Park was known, affectionately or otherwise, as the “rock pile” because of the stones that sometimes sent golf balls ricocheting into the nearby canyons.

Calling the new course “splendid” otherwise, Evening Tribune writer Hough D’Yudu wrote of his first round there: “Turf is not to be expected; there’s mighty little of it among California links, but it isreasonable to expect a roll in the direction a golfer hits his ball.”

Those in the city were beating their chest that the new course was the finest on California’s coast, though they likely hadn’t been up north to see Pebble Beach, which opened in the same year.

San Diego golfers eventually turned out in great numbers, clogging the new course to the extent that, by the end of 1919, the city already had plans for nine more holes. Those opened less than a year later, creating a par-72 championship course at just over 6,000 yards.

It would be another 11 years until the city hired architect SCGA Hall of Famer William P. Bell to produce a nine-hole grass layout over much of the same land. That followed the commissioning of Bell — for $1,000 — to design another grass 18 that opened in 1933, thus completing the 27-hole facility that exists today, though many alterations have been made through the years.

A clubhouse of Spanish architecture was built for $300,000, thanks to a Depression-era unemployment relief fund. It still houses the diner Tobey’s, founded by Chester Tobey, who was first awarded the food concession in 1941. 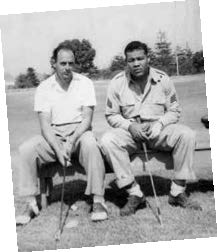 IN AN ASTONISHING AMOUNT of play by today’s standards, handwritten city ledgers from the 1950s show that in the fiscal years of 1953 and ’54, more than 200,000 rounds were played on the nine- and 18-hole courses combined.
“One of the sportiest municipal courses anywhere,” concluded 11-time major winner Walter Hagen after playing Balboa.

Other famous golfers who have been instrumental in Balboa’s history include Tiger Woods, Ernie Els and SCGA Hall of Famer Amy Alcott, all of whom won Junior World titles there. Phil Mickelson and his family have been regular players at the course for decades.

None of them came close to the spectacular 1943 round of Sam Snead, who saw as much time on golf courses as ships when he served in the Navy in San Diego.

According to a firsthand account by Snead’s frequent playing partner Art King, in a 1983 San Diego Union story, Snead was frustrated by losing $16 to King in a morning round and challenged him to a rematch in the afternoon. Snead, who still is the record holder for PGA TOUR wins with 82, scorched the front nine with an 8-under 28 that included two eagles, and he made eight birdies total in setting a course record of 12-under 60 that hasn’t been matched in the 76 years since. 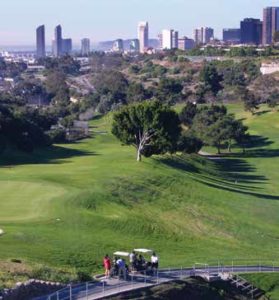 BEFORE THE NEW sprinkler system — funded by proceeds from the 2008 U.S. Open at nearby Torrey Pines — was installed, Balboa Park fell into a period of rough conditions. Rounds plummeted from 140,000 for the 27 holes in 2006 to 88,000 by 2011. The better irrigation significantly turned the courses’ fortunes, and in fiscal year 2018 there were 104,000 rounds played at Balboa, the most in the past four years.

“It’s been a dramatic turnaround,” said Balboa Park men’s club president Jeff Middlebrook of the conditions and the enthusiasm for the course. He noted that there are now 250 men’s club members, up from half of that in 2008.

“The course is a hidden gem,” Middlebrook said.

Hidden in plain sight, that is. It’s five miles from San Diego’s Lindbergh Field and in the flight path of most incoming planes, greeting visitors before they ever touch the ground. ▪