COMING SOON TO AMERICAN SHORES, Honma Golf. If that’s not firing across the synapses, don’t feel alone. For more than a half century, this Japanese brand of niche, über-high-end sticks has been riding a wave on the far side of the Pacific, and is just now set to roll on in over here.

For the record, Honma isn’t new to the U.S. (or North America, because this is a continental push, not just in the States). What’s notable is a full-on marketing effort — headed by former TaylorMade head honcho Mark King — embracing the ultra-premium BERES line and with particular attention paid to the T//World offerings now wielded by Justin Rose, who won the Farmers Insurance Open at Torrey Pines GC right after making the switch to Honma. (A third model, BeZEAL, which are game improvement clubs aimed at moderate- to lower-swing-speed players, can be found for sale in the U.S., but the company is still working on the business and launch model for this market.) 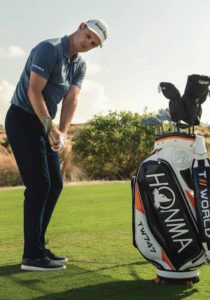 Knowing that blue-ribbon brands and “Rodeo Drive” upstarts like PXG crowd the market, this might seem redundant, certainly when some of your products sell for several thousand dollars individually.

Nothing ventured, nothing gained.

We make ‘super premium’ products that combine craftsmanship, attention to detail and the highest-quality materials for clubs that perform for a wide range of golfers. For better players we make ‘premium performance’ products that deliver exceptional look, feel and performance.”

On this side of Big Blue, the player-oriented T//World includes three iron models: TW 747p, a cavity-back cast that doesn’t look like a boat anchor; the forged-cavity TW 747v for the mid-teen to accomplished crowd; and the Rose-inspired TW 747 blade. Prices range from $150 to $175 per stick, depending on model and shaft. Honma makes its own shafts, in graphite and a fusion in carbon and metal fiber, and clubs can be had with commercial offerings. Hybrids, fairway woods and drivers are in play, too ($249, $299 and $599, respectively.)

Eating (much) higher on the hog, BERES models bear 2- through 5-star designations, varying with build detail and materials, and a full bag of the latter can run more than $50,000, so they are as much symbols of honor as mere weapons of par, which comes when your gamers are finished in platinum and 24-karat gold.

“Honma is legendary in the Asian market, and specifically in Japan,” explained Chris McGinley, vice president of product. “It is a personal and a brand statement, the BERES line. When given as a gift, it is a sign of immense respect. When played, it is a sign of prestige. That is who Honma has been.”

According to McGinley, American and Canadian sales efforts will be strategically targeted, using a referral network of pros and ambassadors, and eschewing massive numbers of storefronts in favor of “key locations in key retailers, ‘Honma hubs’ in specific metropolitan areas and golf markets.”

And coming to Carlsbad this summer, Honma House.

“Think of Honma House as a more refined TPI (Titleist Performance Institute) experience,” McGinley added. “It won’t be a research and fitness facility, it will be a ‘brand experience center,’ a place to get thoroughly fitted to Honma products, experience Honma, buy accessories. It will be ‘boutique’ [compared to other club companies’ fitting centers].”

If you want to kick the tires right now, stop by Roger Dunn Golf Shops’ Santa Ana mother ship, which is home to the first in a planned series of Honma fitting studios. Jay Whang, Honma product specialist at this facility, is eager to show off the wares: “We know golfers are brand loyal and very brand aware.

Most golfers probably haven’t heard of us. We’re more of a niche. There’s a challenge in all of that. But we don’t really have a pitch, we let the clubs do the talking. I just hand them the clubs and you can see it in their eyes. It’s a unique brand, there’s more flash, it’s a statement.” ▪