Fall 2016Public Affairs
Home›Issues›Fall 2016›Lessons from the Drought “Emergency”: A funny thing happened on the way to the apocalypse.

Lessons from the Drought “Emergency”: A funny thing happened on the way to the apocalypse.

This is not a story about the recent drought. If there is one thing we have learned it is that for the Southern California golf industry there is no such thing as a recent drought. Drought is a permanent condition. There is no business as usual to go back to. Moving forward it’s all about turf reduction, warm-weather grasses, altered over-seeding regimens, lake removal, firm and fast conditions and continued investment in expensive irrigation technologies.

This is a story about the recent gubernatorial “emergency” period, a 15-month block of time characterized by draconian conservation mandates, penalties and swift regulatory/legislative changes. Specifically, this is a story about the lessons learned therefrom. And they are likely not the “lessons” you were expecting to read from someone who toils in the field of “governmental affairs.”

First off, the industry was much better positioned to weather the storm (excuse the pun) than most had predicted. When nary a drop of rain fell in February 2015 and the Governor began talking about invoking mandatory statewide water cutbacks of a massive and unprecedented nature, many in the golf industry began talking in apocalyptic terms, railing about targets on our backs, about the revenge of the environmentalists, about the indifference of government regulators, about the ire of a public sure to be angry about brown lawns and green fairways and about a press sure to stoke anger.

A funny thing happened on the way to the apocalypse. None of that occurred. Regulators in particular were hardly indifferent; they were downright sympathetic to reconciling the demands of conservation with the needs of business. Environmentalists were not sympathetic, but neither were they hostile. They focused their ire on industries and large water users that they had come to understand were much less efficient irrigators and much less water-wise than golf.

As for the general public, their understanding of the difference between a front lawn and a golf green was nuanced in a way as refreshing as it was surprising. And the press — accurate and fair with few exceptions.

The industry understood that in places like Los Angeles and San Diego, where the industry had succeeded in reforming drought emergency ordinances to make golf’s compliance therewith compatible with sound agronomic/business practices, the Governor’s emergency edicts would prove eminently workable. But it had little confidence that elsewhere there would be sufficient time or patience to craft parallel workable protocols. 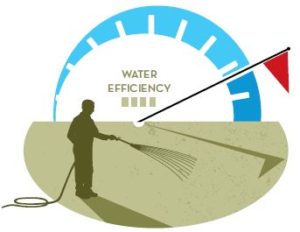 However, most if not all of “elsewhere” proved the naysayers wrong. Water purveyors and public utilities throughout the Southland found their way quickly to conservation protocols that for the most part were workable.

As for that part of the Governor’s emergency order that called for some quick changes to longstanding water law, which many saw as opening the door for a well-organized and funded environmental community to accomplish long-cherished goals inimical to the interests of the golf industry, a funny thing happened on the way to that apocalypse too.

Yes, the NRDC and others made a strong effort to muck up the state’s Model Efficient Landscape Ordinance in ways that would have been detrimental to golf, but they did not in the end succeed. Golf and its friends in the irrigation sector were able to not only repel those efforts, but to inject some long-sought clarifying and defining language into the reformed ordinance to boot.

As for some of the legislation that was a direct outgrowth of the “emergency,” the picture was more mixed. Yes, the recently concluded two-year legislative session produced a bill requiring water districts to crack down on excessive water users anytime a drought emergency is in effect and some level of water conservation is required, a protocol that by its very definition makes violators subject to disclosure under the California Public Records Act.

But the legislature rejected a bill that would have made all commercial water bills public information — a bill that most, including this cockeyed optimist, had assumed would pass both Houses of the Legislature with ease. Yes, the legislature moved the Governor’s climate agenda this year after unexpectedly holding it up last year, but it nixed anticipated reforms to the Coastal Commission and South Coast Air Quality Management District.

As for the press, suffice to say that most of the reporting, particularly by newspapers, was as accurate as it was fair. Even The Desert Sun, a media organ that a few years ago laid disproportionate blame on the golf industry for depleting Coachella Valley’s aquifer, managed to be scrupulously accurate during the recent “emergency.”

So, what’s the lesson here?

It may be that the years of work golf has put into developing cooperative relationships with water districts, government agencies and media organs have positioned the game for results that in previous years it simply did not get. It may be that years of investment in smart irrigation, new technologies and different over-seeding and grassing regimens have positioned the industry for greater respect and consideration by the powers that be. Or it may be that the industry is having an unmerited good run of luck; certainly, the golf industry had nothing to do with the collapse of some of the legislation referenced above.

But as Gary Player used to say: “The more I practice, the luckier I get.”

Let’s just keep practicing and leave it at that.