In the mid-to-late 1990s, right around the time golf became ultra-popular, and therefore increasingly overbuilt by developers racing to take advantage of the game’s heat factor, something happened to the golfers who paid increasingly pretentious green fees to play longer, more difficult courses that were ever harder to maintain.

Guess what: Golfers stopped having fun.

Then they stopped playing.

The folks at Hawk’s Landing GC at Blue Skies in Yucca Valley are aware of these trends, and are taking on the existing atmosphere by executing on an idea that sounds great in theory, but few are willing to practice. A year ago, they purchased the old Blue Skies CC and set about converting it to a 12-hole course with two six-hole loops. When it opens this January, it will be the first “new” course to open in Southern California since The Journey at Pechanga in Temecula in 2006.

“We’d like to bring back the enjoyment of the game, and bring back the social aspect to the game, as well as the challenge,” said Cindy Melland, vice-president of WJB Golf. “We hope players will say they enjoyed their game and the course. We just had the SCGA here and they had lots of positive comments. They said it was user-friendly, but could see the potential for challenge.”

The idea of building a course where players have the option to play six, nine, 12, 15 or 18 holes has been floating around for a few years, but is being put into practice at Hawk’s Landing. Proponents of the concept cite speed and options as its primary benefits. The folks at WJB believe those options are key to restarting the public’s passion for the game. To paraphrase Waylon, Willie and the boys, they believe it’s time we got back to the basics of fun.

As such, the facility has been amended with a new 5,100-square-foot clubhouse and 1,400-square-foot patio. Inside are a golf shop and The Roost Bar and Cafe, an indoor-outdoor bar and grill with flat-screen televisions offering all manner of sports. When completed, it will be the closest thing to a sports bar in Yucca Valley, and is ideally situated to receive golfers after the completion of a round, no matter how many holes they play. There’s also a 250-yard driving range offering limited flight balls and lighted, covered, all-weather teeing grounds with lighted target areas.

Course owner Bill Brehm and his wife Mona (Cindy’s parents), who’ve made a career of newspaper publishing, have a history of supporting recreation in the Yucca Valley area and other regions where their family of newspapers is printed. The two have long supported recreational opportunities for younger residents in the area, which is known for its’ retirement-community lifestyle.

The couple’s efforts recently resulted in the opening of a new 15-acre park with three soccer pitches. Now 89, Bill said he turned his attention to the former Blue Skies course as a means of creating more options for part-time athletes of all ages.

“Realtors told me people were coming to Yucca Valley to look at living and working, but there was no golf course, so they just drove on,” Bill said. “So we thought it was important to have that option. Golf is a great family game, especially if you don’t have to take all day to do it.

“I love golf. I’ve played a lot of golf, and belonged to a lot of different country clubs. But I couldn’t get my wife started because it took so long to play,” he said. “Getting your exercise, and getting to play golf and not take all day to do it … we thought that was a good idea.” 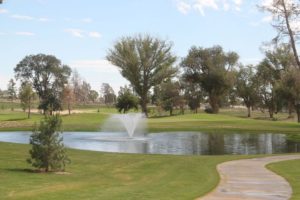 OPTIONS ARE THE KEY

Governing bodies charged with growing the game have spent quite a bit of time over the last 10 years attempting to stem the game’s shrinkage, and to lure and retain new players. All sorts of tweaks have been proposed to achieve that end, and in some cases, have been successfully employed. Teeing it forward, the use of 15-inch cups and Foot Golf have been among the most popular and successful recent variations.

In this environment, nine-hole facilities have benefitted, as players seek less expensive and time-consuming golf options. The concept of building courses capable of accommodating customers who wish to play as few as six (or even four) holes, but as many as 18 has also been bandied about. Such courses could be routed to bring players back to the clubhouse after holes 6, 9, 12 and 18, providing them as many as four options to head directly to the parking lot from their last green should their schedule require it.

This is the reality at Hawk’s Landing. The layout utilizes some of the original course’s corridors, but is essentially a completely new design by San Diego-based architect Cary Bickler.

Bickler designed the layout with a “front six” and a “back six.” The front six runs along the property’s north boundary up against a mountain scape, then reverses back to the clubhouse, which serves as the backdrop for the sixth green. The back six loops through the southern part of the property, and features more trees than the front, and also concludes back at the clubhouse.

“It’s been an amazing team effort, and that’s what these things are all about,” said Bickler, who envisions a day when players can pay for and play a specific number of holes. “We wanted it to be really interesting, and fun, and offer a variety of shots. And I’m very pleased with what’s happening.”

GOING WHERE NO ONE HAS GONE

Players can drop off after six, or continue on to the back six. After completing the back six, they have the option of returning to the first tee and playing the alternate teeing grounds Bickler has designed to give the front six a different look and feel by changing the attack angles. Upon completing the front six for a second time, players are able to score a complete 18-hole round with a par of 71 and a total yardage of around 6,400 from the back. Of course, waiting just behind the finishing holes on each loop is the The Roost, where players can either relive the day’s events, or refuel for another six.

“I was so excited when they contacted me, because there’s been a lot of talk about building a course like this,” said Bickler, “But no one’s actually gone out there and done it.”

Melland said the facility was designed for the recreation golfer in Yucca Valley, Morongo Valley, Joshua Tree and Landers region. However, she’s already fielding calls from golfers in the Coachella Valley asking about the course’s progress, and golfers from all over Southern California are calling to learn more about what’s happening.

“I get a number of calls every day, and the website is very busy, so the interest has been incredible,” said Melland. “I need to change my title from construction coordinator to tour guide, because I have a dozen or so people stop in every day wanting to take a look.”

Chances are good those folks will be back when the course opens to have some old-fashioned fun playing golf.

The Industry at Mid-Decade: The Good News ...