One hundred years ago, the United States was coming out of World War I, triggering a decade of economic prosperity and cultural enlightenment that would become known as The Roaring Twenties.

During the 1920s, a steady stream of big, bold headlines jumped off the front pages of newspapers across the nation. It was the era of Prohibition, the heydays of sports icons Babe Ruth, Jack Dempsey and Bobby Jones, as well as a time when automobiles replaced horse-drawn buggies, “talkies” phased out silent films and Congress ratified a woman’s right to vote. Back then, Americans embraced their sports heroes and Hollywood celebrities as never before.

It was also a decade when the rising popularity of golf — from the end of WWI to the start of The Great Depression in 1929 — helped spawn what is now called the “Golden Age” of golf course architecture, a 30-year period in which some of the greatest architects in history designed some of the country’s best and most famous courses.

STANDING THE TEST OF TIME

In 1921, Red Hill CC joined the Southern California golf boom. The private club was born in the foothills of the San Gabriel Mountains, about 40 miles east of Los Angeles, with Mount Baldy’s 10,000-foot peak looming in the picturesque background.
With renowned architect George C. Thomas designing the first nine holes, Red Hill CC was constructed in what was then a sparsely populated agricultural area of San Bernardino County — bordering land that had been incorporated as Upland in 1906 and became part of a city incorporated as Rancho Cucamonga in 1977 — that at the time was used primarily for growing citrus fruits, olives and grapes.

A century later, Red Hill CC is celebrating its 100-year anniversary, and its 18-hole championship layout — including the second nine, which was designed by William P. Bell and opened in 1947 — remains a “classic” course in every sense of the word.

The centennial was supposed to be a yearlong celebration in 2021, but the ongoing pandemic altered those plans and instead led to a 1920s-themed “Centennial Gala” over a weekend in late October. It featured two days of golf competition, one for members and another for past members and couples, and a formal dinner with Great Gatsby-style décor and costumes, exhibits from Red Hill’s storied history, a vintage car show and celebrity meet-and-greets. A book on the club’s 100-year history written by Julie Walke also was distributed. 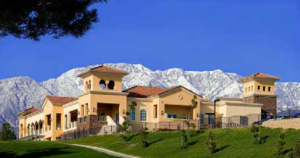 The clubhouse at Red Hill CC

“This has been an exciting time for our members,” said Michelle Lindley, a longtime member and chairperson of Red Hill’s Centennial Committee.

Lindley, whose home overlooks a teeing area on the front nine, exemplifies the type of members the club has attracted and nurtured over the years. She is a third-generation member of a family whose Red Hill roots date back to 1952, following her grandparents, Jack and Betty McNay, and her parents, Al and Mary Wegener.

“My grandparents were regular members until they passed,” Lindley said. “My parents were junior members and later became regular members. And we took over our grandparents’ membership. The club has always had longevity. We’re not the only three-generation family here. Red Hill has changed over the years, but it has always had a family environment.”

Lindley remembers being dropped off at the club by her parents in the morning as a youngster, as were several of her friends, for golf lessons and tennis lessons and practice for the club’s swimming program — a program that continues to this day — and then being picked up at the end of the day.

“There are all sorts of family activities,” she said, mentioning that pickleball has now become popular. “The quintessential country club atmosphere lives on.”

“We pride ourselves on being a club for everybody,” added current club president John Mack, a member for the past 16 years.

And speaking of longevity, longtime member Gyle Tague, age 97, still likes to play nine holes three times a week, using a cane and a cart, usually by himself in the late afternoon, sometimes playing two or three balls if he’s not satisfied with a shot.

Like Tague, Red Hill CC has stood the test of time.

A STAR IS BORN

On May 13, 1921, the Upland News included the “announcement of plans for the establishment of Red Hill CC with an 18-hole golf course in connection with the handsome new Sycamore Grove Hotel, now nearing completion to the east of the city.”

After articles of incorporation were adopted that month, Red Hill leased 260 acres of land from the Cucamonga Water Company, and managers of the new hotel “agreed to fix up the spacious basement with lockers, showers and other conveniences for golfers.”

At the time, George C. Thomas was a new member at The Los Angeles CC and on the green committees on its North and South Courses. He agreed to design Red Hill for free because of his friendship with Albert L. Swift, an area citrus grower who would serve on Red Hill’s original board of directors and later as its club president. Roy Tufts was the superintendent of course construction and then became the club’s first golf professional/instructor. 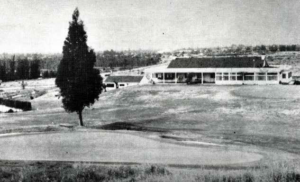 The first clubhouse at Red Hill CC, circa 1929

Construction began on Red Hill in the spring of 1921, and it officially opened for play as a nine-hole course on March 18, 1922.

The original opening nine measured about 3,100 yards. The first tee was about 40 yards from the entrance to the Sycamore Hotel (now Sycamore Inn), and the green on the opening hole, then a 460-yard par-5, was situated in the same location as the current green on No. 2, now a par-4.

The original ninth hole was a spectacular, 300-yard, downhill par-3 over a wash onto what is now the fairway for the current opening hole. Thomas once said of No. 9, “For actual thrill, it is almost in a class by itself.”

That hole is gone, because design changes were necessitated by the construction of the second nine 25 years later, as well as a new road alignment and the addition of houses around the course.

But the thrill is still there — if you dare to try to drive the green on the new No. 1, a 265-yard, downhill par-4 that doglegs slightly to the right, with water lurking right of the putting surface. It’s not the smart play, but it’s the fun play.

One hundred years after its opening, Red Hill remains a traditional or “classic” course, with tree-lined fairways, elevation changes, doglegs that require you to work the ball both ways, punitive rough, and small, fast-paced greens that are featured on so many vintage courses from that era.

Though the course is considered short by modern-day standards — it plays 6,575 yards from the back tees, with a slope of 130 and a 72.6 course rating — it’s still a shotmaker’s course that makes you use all the clubs in your bag.

Director of Golf Frame points out that the “thick rough and small, undulating greens make our relatively short course challenging for all golfers.”

Unless, of course, you’re a veteran tour pro such as John Daly or Kevin Na — both honorary members at Red Hill — or if you’re 23-year-old Derek Castillo, a first-year tour pro from Yorba Linda who this past July shattered Na’s course-record 62 with an iconic 59.

Unquestionably the best player in club history was SCGA Hall-of-Famer Dr. Frank “Bud” Taylor Jr., arguably the greatest amateur in the history of Southern California golf until Eldrick Woods came along. Bud won 11 club championships (the first at age 17 in 1934), two California Amateur Championships, finished second in the 1957 U.S. Amateur and played in four Masters (1957-60) as an amateur, including a 13th-place finish in ’57. He also held the Red Hill course record of 63 for many years. Fittingly, the club still has a two-day Bud Taylor Cup every year in his honor.

“I’ve had the opportunity to play some great golf courses, and I think Red Hill stands up with some of the best,” said Mack, the club president. “And the current members have undertaken some projects to improve the club, such as turf reduction (for water conservation) and bunker restoration (by architect Casey O’Callaghan) last year, to make them more like the original design.”

Mack says there are several holes worthy of “signature” status at Red Hill, starting with the finishing hole, a 408-yard, dogleg-right par-4 that plays uphill toward the clubhouse. Sound familiar, George Thomas fans?

“I believe 18, without question, is the No. 1 signature hole,” Mack said. “A lot of us consider Red Hill the big brother to Riviera CC, and I liken our 18th to the finishing hole at Riviera.”

(Riviera, another classic course, was also designed by Thomas and opened five years after Red Hill, in 1927.)

Other people include No. 4, a 136-yard par-3, as another signature hole, especially after O’Callaghan’s bunker renovation made it “aesthetically fantastic,” according to Mack.

“It really sets the green into the hill, surrounded by bunkers, with a beautiful stone pine tree as a backdrop,” Frame said.

And Mack said that No. 12 and No. 14 (512- and 510-yard par-5s, respectively) are pretty special, “in particular during the winter, when you face snow-capped mountains in the background.”

One hundred years after its opening, Red Hill Country Club is thriving, with all memberships sold.

There were intermittent challenges that threatened the club over the years, especially financial problems during The Great Depression in the 1930s and World War II in the 1940s. The club went up for sale in 1934 after it defaulted on a loan, but it was saved after a member secured a loan to pay off the debt.

And after the member-ship count had dwindled to 54 in 1942, the club was almost sold to the City of Upland for use as a municipal course and park. But the board of directors voted 3-2 to remain a private club. Interestingly, the installation of slot machines in the clubhouse generated enough revenue to keep the club and course open, before law enforcement ordered them to be removed.

Nowadays, as it begins its second century, it seems that the Roaring Twenties have returned to Red Hill CC.