Tucked away on a leafy, rustic lane five miles east of Santa Barbara and cloaked in near anonymity sits the Valley Club of Montecito, one of the purest expressions of Alister MacKenzie architecture in the world. While many Hollywood and society elites have found their way to the secluded Montecito community, the Valley Club itself is bereft of glitz or ostentatiousness. The star at Valley, as the members abbreviate it, is the golf course.

A classic from day one, The Valley Club may fly well under the radar of many keen Southern California golfers, but there is nothing stuffy or pretentious about the place. In fact, the cheerful bonhomie among members, staff and guests is palpable. This is a club that simply embraces golf tradition (there are no 150-yard markers, and the majority of golfers walk) and one that cherishes its low-profile, serene environment.

Opened on Dec. 30, 1929, the Valley Club of Montecito proved to be the final design from the team of Alister MacKenzie and Robert Hunter, who together had crafted Cypress Point Club and the Meadow Club in Northern California, among others. Historians have long debated Hunter’s influence on MacKenzie’s designs. Architect Tom Doak wrote that “Hunter’s primary role with MacKenzie was as a deputy responsible for implementing Alister’s designs …(but) working together, they were a potent team.” 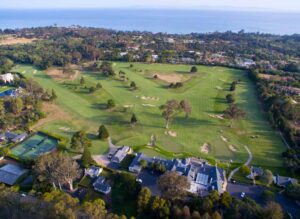 What’s indisputable is that Hunter had relocated to Santa Barbara from Pebble Beach early in 1928 and likely spent more time here than on any other of the pair’s designs. Upon completion, Hunter joined the club and served as greens committee chairman. What’s also indisputable is MacKenzie’s genius for routing and bunkering a golf course and for infusing strategic shot values into a beautiful setting, as he did designing Augusta National. All of these traits are showcased at the Valley Club.

Situated between the Pacific Ocean (a half-mile south) and the Santa Ynez Mountains, the Valley Club is draped atop two parcels, the east and the west, which are divided by Sheffield Drive. Eight holes (Nos. 1 and 2 and 13-18) occupy the clubhouse side, while 10 holes (Nos. 3-12) are draped over the Sheffield side. Both sides offer twisting creeks, handsome, sturdy oaks and sycamores, mountain backdrops and those dazzling MacKenzie sand sprawls.

The brilliance of the routing is illuminated by how MacKenzie managed to work six holes off two hills on the east parcel (Nos. 3, 4, 7, 8 and 10 and 11) and instill in them maximum variety. Grouping such wonderfully varied holes in close proximity also increases the pleasure in walking the course and allows for a quicker pace.

At 6,647 yards, par 72 from the blue tees and 6,800 yards fully stretched, the Valley Club won’t scare anybody with length. MacKenzie always had a soft spot for the 15-handicap player, so most of the greens are open in front. The Santa Ana Bermuda fairways yield tremendous roll, providing even further assistance to the less skilled. However, nearly every green must be approached from the proper angle.

Indeed, the bulk of the challenge comes from the greens and their surrounds. Many of the putting surfaces are smaller, or perhaps narrower, than some other MacKenzie designs, but here they tie in perfectly with the canyon setting. Superintendent Roger Robarge earns a golf clap for the firm, immaculate conditions.

The subtly contoured, Sutton’s mix greens (a blend of bents with some fescue) run fast, typically 11.5-12 on the Stimpmeter, and true, though green reading can be an adventure. Putts into the mountains are inevitably slower, even if they appear to be downhill, while the reverse is true for putts toward the ocean. Additionally vexatious are the closely mown, creeping bent green surrounds, which provide an attractive “one-cut” look but add difficulty to a recovery shot, which has to be delicately lofted over a bunker.

MacKenzie’s use of deception and alternate routes are legendary, and they’re on display here. Scott Puailoa, head professional at the Valley Club since 1979, admires the artistry at the 422-yard, par-4 fifth, the number-one handicap hole.

“A fairway bunker 60 yards from the green is so well tied into the visual of the greenside bunkers that it looks like it’s right next to the green,” said Puailoa. “It’s also a great risk/reward situation for the shorter hitter. Carry it and catch the downslope on the back side of the bunker, and it might chase all the way to the green. Find that bunker and it’s trouble, but it’s easy enough to avoid it entirely, too.” 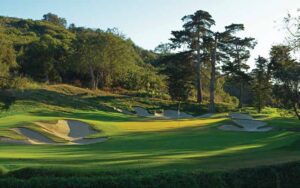 Among the most revered par-4s are the 453-yard third and the 433-yard ninth, both of which climb gently and to the right, with a hazard on the right side. Each features a severe back-to-front green complex, making for extra chipping and putting challenges. Another distinctive hole is the 382-yard, par-4 13th, with its deceptive fairway bunker center-right and its complex green with many appealing pin locations.

Most memorable at The Valley Club, however, are its remarkable par-3s. As described in The Life and Work of Dr. Alister MacKenzie, co-authored by Doak, the quartet must surely rank among MacKenzie’s best work: “The (149-yard) eighth hole leaps from hilltop to hillside, with a sharp fall to the right; the (178-yard) 11th is dominated by an elaborate bunker short-left and the barranca on the right; and the (175-yard) 14th is a magnificent picture, across a deep valley to an Eden-type green guarded by a huge bunker at right front and with the fifteenth fairway, the clubhouse and the mountains forming the backdrop. But the one truly original hole at The Valley Club is the short fourth (144 yards) with its tiny green set in the midst of a grove of huge sycamores.”

Actually, it is the clubhouse — that iconic, Carleton Winslow-designed, Norman country house clubhouse — that provides the lasting image of the Valley Club. Puailoa’s favorite two spots revolve around the clubhouse . The first is from the terrace, where one can see 15 green, 16, 17 and 18, with a beautiful vista of the ocean.

“Standing on the 14th tee is the other,” says Puailoa. “Looking back up to the clubhouse, across the first fairway, with the mountains in the background, is really special.”

Whether it’s the view from the 14th tee or the walk up the 15th hole — or the 18th hole — the draw is magnetic. The mix of artfully sculpted bunkers, strategic design and lumi-nous clubhouse, all cocooned in tranquility by mountains, is as delightful as golf gets.

On only a few occasions have other architects touched the MacKenzie masterwork. Most notably, Doak and Jim Urbina created a master plan in 1996 that eventually saw the full restoration of the MacKenzie-Hunter greens to their original shapes, sizes and contours. They also took the spectacular, multi-lobed bunkers back to their original dimensions, which once again resemble jigsaw puzzle pieces. Architect Todd Eckenrode helped the club set fairway lines and removed non-native and non-original trees in 2013-’14.

Most days at the Valley Club are marked by a soothing calmness, but not on July 6, 2004. On that day, electric jolts crackled throughout the grounds, as club member Fred Couples lit up the storied course with a record 59. Former senior club champion Steve McHugh remembers it vividly, as he and partner Topper Owen were the opponents, and lost five ways. 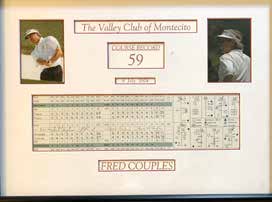 “Fred started that round pretty special,” said McHugh. “He started with eight 3s in a row, then a 4 — 28 on the front, with four putts that were very makeable. John Pate (the 1999 SCGA Amateur champion and a longtime member who then held the record with 61) showed up with his son Matthew on the 17th hole. Matt was about 5 at the time. John asked, ‘How is everyone playing?’ I handed him the scorecard. John’s eyes lit up. ‘OMG!’

“Fred had hit into the fairway cross bunkers on 17 with his drive, then hit the approach shot 30 yards over the green onto the 18th tee box. John started yelling at Fred that he better not chunk the round on purpose. Fred chipped from the 18th tee to six inches. After a perfect drive and a good second to 18, Fred asked Matthew to read his putt. Matt at age 5 was good. Fred rolled it in to shoot 59.”

Nearly as remarkable, Couples failed to birdie any of the par-3s in his sub-60 round. While short on scorecard length, it’s testament that outstanding design can vex even a white-hot Masters champion.

That’s the Valley Club scene. It’s completely about the simple joys, the fellowship, the charm of the golf course, the respect for the traditions of the game.

“If I won the lottery,” wrote Doak in 2015, “this is where I’d retire; in fact, it’s hard to imagine anyone else making a different choice.”

Echoed Eckenrode in 2018, “If I had one course to play every day for the rest of my life, this would probably be it.”

Given the Valley Club’s perfect weather, idyllic setting, delightful ambience and splendid design, it’s hard to argue with the architects.

First Cut: One For The Aged