When Lewis and Clark set off from Illinois in 1804 in search of the rumored Northwest Passage, they had embarked on the most adventurous journey the young nation of America had ever known. Setting off from Southern California in 2021 won’t be nearly as arduous, but the rewards for reaching the Pacific Northwest are just as rich — especially for golfers. Whether you crave oceanside links, dense evergreen forests, snow-capped mountains or river-slashed high deserts, you’ll find them in Oregon and Washington. Three superb but very distinct destinations —Bandon Dunes, Gearhart Links and Gamble Sands — deliver exactly that kind of variety.

Clinging to the clifftops on the southern Oregon coast, Bandon Dunes oozes bucket-list golf from every pore, with four championship tests ranked in the nation’s top 15 public courses. So what to do for an encore?

Add a fifth must-play layout, and make it the most spectacular course on the property. Hello, Sheep Ranch!

Designed by Bill Coore and Ben Crenshaw, Sheep Ranch opened quietly on June 1, 2020, in the midst of the pandemic. For nearly 20 years, the Sheep Ranch had been home to a mysterious, seldom-accessed informal golf playground with 13 greens, several of them directly on the cliff’s edge. At long last, Bandon’s ownership decided to redevelop it to its full potential. Constructed atop a windy site, the 6,636-yard, par-72 Sheep Ranch lacks any formal sand bunkers, making it unique among the Bandon offerings. It is also the most walkable.

Perhaps the most memorable spot on the course is the cliff-top double green shared by the third and the 16th, petite par-3s that practically melt into the ocean. The third measures a mere 120 yards, but it can feel like 220 when the wind is at full fury. The stunning 16th checks in at 151 yards and is equally daunting amid the gusts. 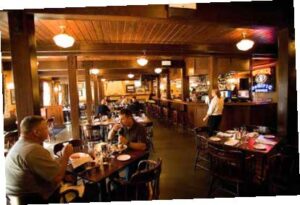 “The Sheep Ranch doesn’t have the sand dunes like Pacific Dunes or Bandon Dunes,” says Coore. “It doesn’t have the incredible diversity of vegetation like Bandon Trails. However, it has the best vistas at Bandon. Almost every hole feels like it’s on the ocean, even if it’s not. The vistas are just off-the-charts spectacular.”

IDEAL FOR: Buddies. The best bonding experience in golf this side of St Andrews is Bandon Dunes. However, it’s not for everybody. Due to the challenging terrain and designs and frequently wild weather, it favors the reasonably proficient, physically fit player (all courses here are walking-only), as briskly paced 36-hole days are the norm, with most golfers choosing caddies.

INDULGE IN: Lively McKee’s Pub is the most atmospheric dining and drinking option. After eight hours in the elements, comfort food rules. I’m partial to Grandma’s Meatloaf, or the Shepherd’s Pie, paired with a nice Oregon Pinot Noir. At the Sheep Ranch, pay your respects with the Coore’s Clam Chowder, a lunchtime favorite.

You wouldn’t travel to a top resort just to play a par-3 layout, right? QuickSands at Gamble Sands is so much fun, it might change your mind.

Situated in the high desert, 2.5 hours west of Spokane amid the Columbia River Gorge and the snowcapped northern Cascades, David McLay-Kidd’s new mini-masterpiece occupies a 25-acre site rippled with sand dunes. The 14-hole, walking-only spread opened on May 4, 2021, and features holes that range from 60 to 180 yards. These brilliantly designed par-3s definitely do not embrace all-or-nothing shot values.

“A lot of ‘one-shotters’ in the world don’t allow for a ground game … you have to carry it to the target,” said McLay-Kidd just ahead of opening day. “With QuickSands, we are encouraging the ground game with giant slopes and movement, to allow golfers to be creative and use the ground. If four golfers play a hole four different ways, that will be fun and differentiate the experience.”

Indeed, I was in one such foursome. At the downhill sixth, a hole aptly called “Faith,” one player used putter from 160 yards; another did, too, but on a different line; our third hit a more traditional 7-iron up in the air, while I opted for a 3-hybrid bunt along the crispy fescue fairway, which led to my only birdie.

Our group was mesmerized all day, gazing at our scurrying golf balls, rolling toward the hole via perfectly designed backstops, or vanishing behind sea swells of turf that define each of the mammoth-sized, wildly varied putting surfaces. Sinking an hour and 15 minutes into a round at QuickSands is as grin-inducing as golf gets.

As long as you’ve made the trip, there’s a championship course crafted by McLay-Kidd in 2014 that matches QuickSands for pure joy. When a course stretches 7,227 yard, but is sloped a puny 120, that’s practically code for F-U-N. Ranked No.1 in the state and among the top 20 public courses in America by Golfweek, the Sands delights with banks, ramps, mounds and kick slopes that help propel the ball toward targets, rather than repelling it.

After golf, the Inn at Gamble Sands offers 37 extra-large resort rooms, each with views of the 100,000-square-foot, rollicking Cascades Putting Course, also designed by Kidd. As you’re laughing yourself silly with so much mirth-filled golf, you’re reminded of why you traveled all the way here: There’s nothing like Gamble Sands anywhere in the world.

IDEAL FOR: Everybody. Its golf appeals to every skill level, it’s wonderfully walkable, yet carts are available; the food and beverage setup is simple and outstanding, and there’s extra golf everywhere.

INDULGE IN: Danny Boy Bar and Grill. Indoors and out, mealtime is a treat, with river and mountain views to match. Top choice at lunch is a “Shareable,” the Pork Belly Tacos, followed in popularity by the Danny Boy Burger. For dinner it’s the Whiskey Prime Rib and the Dungeness Crab (an entire pound!) that are the favorites. Delectable nighttime specials include the Copper River Sockeye salmon and a locally sourced rib eye steak. And since this is the heart of apple country, any apple-infused dessert or cocktail is sweet indeed.

Never heard of Gearhart Golf Links? It’s only a matter of time. In a 2020 magazine story, Peter Jacobsen divulged that Gearhart was the first course he had ever played. “My family would vacation in Gearhart and we would play this incredible hidden gem on the Oregon coast,” said Jake. Also in 2020, David McLay-Kidd revealed Gearhart to be one of his Top 10 unknown courses in the world. 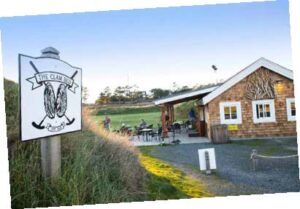 Now it’s your turn to discover its myriad charms.

Golf at Gearhart dates to 1892, stamping it as one of the oldest destinations in the West. Located less than 20 miles from the Washington border, Gearhart is an actual links, built on sand and situated roughly 600 yards from the Pacific Ocean. As with England’s storied British Open venue, Royal Lytham & St. Annes, you can’t see the sea at Gearhart, but you can sense it with your ears and nose — and even with your eyes, as you take in the tumbling terrain, scrub-covered dunes, wispy fescues and the exposed pockets of natural sand that are the indisputable components of seaside golf.

Over time, Gearhart lost much of its links flavor thanks to overly ambitious tree planting. Enter Tim Boyle. The CEO of Columbia Sportswear had a soft spot for Gearhart, purchased the property and has successfully restored it over the past 10 years, with the help of architectural consultant John Strawn.

At 6,551 yards, par 72, Gearhart delights at every turn. Its firm, fast-running turf and open entrances to greens make it ideal for “traditional” golf, with an emphasis on the ground game. It’s no surprise, then, that the course is a magnet for purists. Indeed, Gearhart will host the 2021 U.S. Hickory Open in September, a competition that requires players to use equipment from 1930 or earlier.

Character-filled individual holes abound, notably the 373-yard, par-4 ninth. “This hole is perhaps the most linksy,” says Jason Bangild, general manager/director of golf, “with a large dune of beach grass, a hidden pot bunker and a sporty, bumpy fairway, with the beautiful Coastal Range in the distance.” 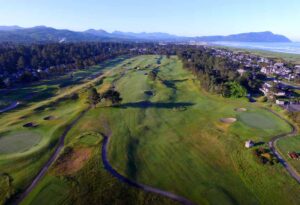 Another favorite is the unique 371-yard, par-4 14th, with its semi-blind approach over a dune ridge to a tiny green.

For additional character, Gearhart’s 19th hole is better than most. McMenamin’s Sand Trap Pub and adjacent cedar-shingled, 34-room hotel serves up exactly what you’re looking for after the round.
IDEAL FOR: In his new book, A Course Called America, Tom Coyne phrased it nicely: “Bandon was the can’t-miss trip, but Gearhart felt like the jaunt for budget-minded buddy trips, or a Bandon add-on for golfers in the know.” It’s also a terrific destination for couples, or as a side trip for families, with myriad attractions in the nearby towns of Seaside, Cannon Beach and Astoria.

INDULGE IN: McMenamins is renowned for their IPAs. At the awesome new Sand Bar halfway house (complete with its own free-to-the public putting green called the Clam Bed), I took a liking to the 33rd State IPA on tap, which is refreshingly crisp, dry hopped and citrusy. Bangild wryly observes that “the elk sausage sandwich is one of a kind, and slightly ironic as Roosevelt elk frequently roam the links.”