At The TurnSummer 2021
Home›At The Turn›Building A Winner: The New University Of San Diego Golf Practice Facility

THE RUMORS AND CHATTER WERE AROUND FOR YEARS. The University of San Diego wanted to raise the stature and appeal of its golf program, and it thought one of the best ways to do that was to have an on-campus practice facility like some of the powerhouses in college golf.

The problem was that the Toreros spent little time contending among the elite, enjoying only a relatively small window of success when Tim Mickelson was the head coach in the 2000s. It’s hard to look and act like you’re Arizona State if you don’t play like it.

USD has not returned to that territory quite yet, but there are positive signs on the road back, such as reaching the 2021 NCAA Championships under fourth-year head coach and former U.S. Ryder Cup player Chris Riley. And that long-coveted practice facility is about to become a reality.

Boosted by a USD alum’s donation of $2 million, the Toreros will build a one-acre short-game practice facility. If all goes well, that won’t be the end of the additions. There are also plans for a $5 million golf clubhouse that would include locker rooms and offices.

The designer may be the biggest news of all. San Diego native and World Golf Hall of Famer Phil Mickelson and his architectural partners are doing the work, with an eye on making it similar, on a smaller scale, to the practice area they designed for Mickelson’s alma mater, Arizona State.

“I could not be more thrilled to be designing a state-of-the-art on-campus practice facility for the Toreros,” Mickelson said in statement released by USD.

The Mickelson family ties to USD run deep. Tim Mickelson took over the struggling Toreros golf program in 2003 and built a team that nearly reached the final eight of match play in the 2010 NCAA Championships. Mickelson was named West Coast Conference Coach of the Year four times before leaving to helm the Arizona State program, where he recruited Jon Rahm to be a Sun Devil. Also, sister Tina Mickelson graduated from USD.

The renderings of the new practice facility are impressive. There is a 40,000-square-foot fairway and rough area from which to practice shots up to 100 yards, a 7,500-square-foot putting green, and two “Phil Mickelson signature” features — synthetic turf targets and putting pads that have slopes ranging from 2 to 4 degrees.

I could not be more thrilled to be designing a state-of-the-art on-campus practice facility for the Toreros. – Phil Mickelson

“It’s a game-changer for us,” Riley said. “They’ve been talking up a short-game facility here for 20 years, and people said we’d never have it. There are so many schools now that have their own courses. For us to be able to practice on campus, where guys can go down to chip and putt any time they want to, that’s big.”

The funds from the project are coming from 1997 USD graduate Paul Purcell, who didn’t play on the golf team but is a huge fan of the sport. Purcell is on USD’s Board of Trustees and his family has a legacy of generously supporting universities. If you’re a Notre Dame fan, you probably recognize the Purcell name. It adorns the arena that is home to the Fighting Irish basketball teams. Paul’s father, Philip, is the former chairman and CEO of Morgan Stanley. 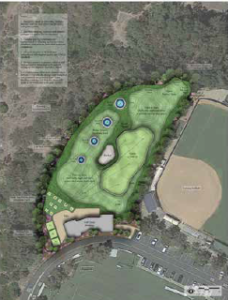 “This is truly a transformational gift,” said USD Athletic Director Bill McGillis, whose goal is to also open up the practice area to The First Tee San Diego and children in the diverse Linda Vista neighborhood that surrounds the campus.

Make no mistake: The facility probably wouldn’t have come to fruition without the stature of the head coach. Riley, the 47-year-old San Diego native who played regularly on the PGA Tour for 15 years, notched one victory and was ranked as high as 21st in the world at one point. His most notable achievement is earning a spot on the 2004 U.S. Ryder Cup team and scoring a victory with partner and good friend Tiger Woods.

Riley walked away from professional golf after 2010 to be closer to home for his wife, Michelle, and their two daughters. When the USD coaching job opened in June 2017, Riley jumped at the chance to get his first college job.

Riley contends that “it’s all about relationships” at the college level, and his ties to the top levels of the golf community, along with the time he spends with donors, has made him valuable in building the USD program back to national respectability.

Though the early going was challenging, Riley has the team back on an upward trajectory. He got an anchor player in Charlie Reiter, out of Palm Desert, who transferred from USC, and he’s got some potentially standout younger players, led by Torrey Pines High product Andi Xu.

The impact of those players has been immediate, with the Toreros becoming the only double-digit seed in the regionals to advance to the NCAA Championships in June. USD ended up 27th, 1 stroke behind crosstown rival San Diego State.

With Riley in charge and a new facility on the way, McGillis is bullish on USD’s future.

“This is only the beginning of how great we can be,” he said.