18 HOLES EVERY DAY FOR A YEAR

Can there be too much of a very good thing? If we’re talking about golf, the answer is emphatically no — at least for Dawood and Emma Ashe of Fallbrook.

Starting on April 11, 2020, the couple strode out onto the links at Golf Club of California to play a round of 18 — and then proceeded to play 18 every day for 365 days, come rain or shine, hail or heat. Or pandemic.

Technically, when the Ashes commenced their streak, the course was closed, the clubhouse locked tight and golf carts mothballed. But the pandemic strictures also figured into their decision to begin playing every day. Dawood, 72, and Emma, 66, were devout gym rats, but gyms were decidedly shut down. They needed a consistent exercise outlet. As nine-year members of the Golf Club of California, they figured they could park outside and slip onto the course without repercussions, and they were right.

“We set a goal,” recalls Emma. “Fifty days in a row.” For about the first 30 days, they had the course to themselves, walking the hilly, 6,828-yard layout with push carts. Then other members began to catch on. “It was a bit of a gray area,” says Emma. “As long as we parked outside, it was okay. When the police came by, they just said to keep your distance and wear your mask.”

The Ashes received full support from the staff at the Golf Club. “They supported us all the way,” says Emma. “(Director of Golf) Richard Ro said, ‘Show up anytime. I’ll take care of you.’ He’d always take time to talk to us and ask how our day was. And the members are the friendliest members anywhere.”

Club management even accommodated the Ashes’ streak on big tournament days, reserving a time on the course for the determined couple.

Although having the course to themselves was a unique experience, the Ashes welcomed company when the Golf Club of California reopened. “We were happy! You see humans around you, you see action, people looking for balls,” recalls Dawood. “We had to adjust to playing faster since we were walking a course where hardly anyone else walks. But we don’t dillydally. We can play the course in three and a half to four hours.” 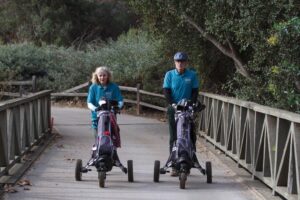 It’s natural to wonder if playing the same course every day with the same company (each other) at the same time (between 8 and 9 am) ever got boring. Or if it led to something resembling mastery of the course. Again, the answers are no and no. “Master this course?” Dawood laughs heartily. “It’s the most challenging course I can imagine. And it never gets boring. Every day, it plays different. It’s tough. Not bad, tough. After nine years, I still can’t read the greens. And I’m a good putter.”

The Ashes may not have mastered the course, but their games improved, and they enjoyed success at one time or another on every hole. As Emma puts it, “My swing improved, but there’s always something.” And Dawood: “Every morning I have a new set of things I want to try. I can’t wait to get back out.”

The Ashes birdied every hole at Golf Club more than 20 times, except for two that they only birdied twice. They also sprinkled in a few eagles, including Emma’s eagle on No. 4 that stands out as a highlight of their big year. Dawood brags for his wife: “No. 4 has a big bunker in the middle of the fairway, 150 yards from the green. When she hit out of the bunker, I said, ‘That looks fantastic!’ I followed it as it got one inch from the hole and then rolled in. She made the perfect shot.”

When asked if she now strategically plunks her approach into that bunker, Emma laughs and says, “Well, I hit it 70 percent of the time anyway.”

Blessed as we are in SoCal, weather wasn’t a huge factor in the Ashes’ streak. When it rained hard, they donned PVC rain jackets and toted umbrellas. When it was cold, they employed hand warmers. “The heat was the worst. That got to us,” says Dawood. “But still, it was easier than we thought. Or maybe we got tougher.” When the weather was bad, concerned friends would text the Ashes: “Did you play?”

“They were more worried about us missing a day than we were,” says Emma.

Other highlights? Seeing a coyote with a couple of pups. Various snakes. Hawks and roadrunners. Birdieing the same hole together. “But really, it was the whole experience,” says Emma. “Walking, nature, and of course, each other. We have a good time together all the time.”

Which raises the question: Who was beating whom? Dawood’s answer is directly to the point: “We are together 45 years.”

Emma explains: “That’s a long time. We’ve managed it by not saying who beats who. We respect and support each other.”

In other words, golf is something of a love story for this couple: he originally from Iran, educated in Germany; she originally from Germany, both in the U.S. since the early ’80s. And both somewhat late to golf. He’s been playing for 13 years, she for nine.

The Ashes’ life revolves around golf, and around being together. So this will probably not surprise you: On April 10, 2021, they played their 365th consecutive round together. They celebrated with a steak and a glass of wine. And a day off.

Then on April 12, 2021, they returned to the Golf Club of California. They’ve played every day since.

Out of COVID’s Frying Pan And Into ...