You won’t struggle to find stories about golf courses either losing money or shutting their doors these days. But news about previously closed golf courses reopening and actually thriving? That’s about as rare as a U.S. Ryder Cup win. But it’s happening right now in Las Vegas, where one course and part of another have been coming back to life.

When Lake Las Vegas debuted in the mid-1990s, there was nothing comparable in the area. Located 25 minutes southeast of the famous Strip, the sprawling residential community was centered on a 320-acre lake. A private Jack Nicklaus designed course called South Shore CC opened in 1995, while Reflection Bay GC, a high-end daily fee course also designed by Nicklaus, followed three years later directly across the lake. A number of residential communities were built, as were two hotels (a Westin, which recently underwent a $40 million renovation, and a Hilton) with a combined 850 rooms.

The growth continued in 2007 when a Tom Weiskopf design called The Falls debuted. But not long afterwards the real estate market collapsed, with Las Vegas hit especially hard. The Falls ceased operations in 2009 and Reflection Bay shut down in 2010.

Enter John Paulson, a hedge fund manager from New York City. He saw an opportunity in the downturn, acquiring real estate assets through a bankruptcy auction. In 2014, he also purchased Reflection Bay and The Falls, which by then were ghost courses lying fallow.

“He recognized that golf would be an integral part of res-urrecting the real estate communities,” said Eric Dutt, a Las Vegas native and veteran of the area’s golf scene. “He renovated Reflection Bay and took 12 holes of The Falls course for real estate development.”

In 2017 he also brought in Dutt, now the director of golf operations for Reflection Bay GC. He is leading the ambitious renovation work both on and off the course.

“We’ve been working on course conditioning and have built a new grill room, among other changes,” he said. “Our focus is on improving the golf experience across the board and working with hotel partners here and on the Strip regarding stay-and-play packages.” 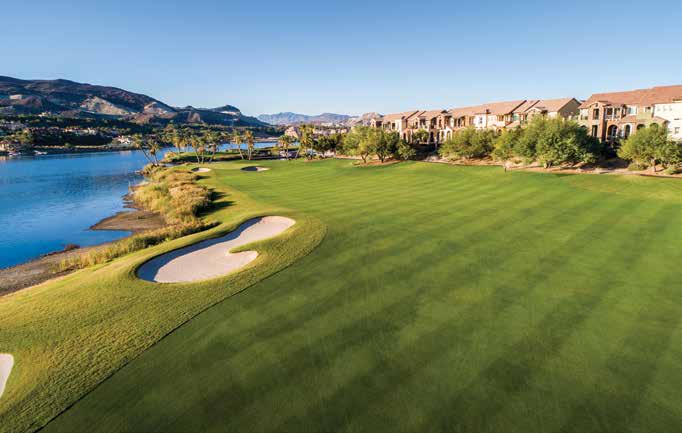 Reflection Bay, which ranked among Golf Digest’s America’s 100 Greatest Public Courses from 2003 to 2007, reopened in 2014. The last two holes on each nine play directly along the western edge of Lake Las Vegas. “The more I play it, the more I like it,” said Dutt. “It’s actually a very fun course for women and higher handicaps too. There aren’t a lot of forced carries, and the ones that do exist are pretty easy. The views across the lake are memorable.”

Dutt’s expectations for course conditions are a bit different from others’, given his long history of organizing professional tournaments in the area.

“Right now, Reflection Bay is about 65 percent of where I want it to be,” he said. “But it’s two to three times better than it was when I got here. We’re through Phase 1 and now we’re talking about aspects that will take it to another level. We have a new fleet of golf carts with GPS coming in soon, we have new maintenance equipment coming later this year and we’ve replaced the beverage carts with five drink stations located around the course.”

At South Shore CC, limited outside play is part of stay-and-play packages or available through reciprocal deals with other country clubs. The course features some dramatic elevation changes, with a handful of tee boxes 100 feet and more above fairways, providing tremendous views of the area. The final three holes are especially notable: a par 3 with a green across a canyon, and back-to-back par 4s that follow the rolling landscape.

Even The Falls course is getting some use again — three holes are part of a new Golf Academy led by former PGA TOUR players Craig Barlow (who shares the low round of 64 from the tips at Reflection Bay) and Jeff Gallagher. When complete in summer 2019, the academy will offer one-, two- and three-day golf school options for juniors and adults and will be open to beginner and more advanced players.

Dutt said the academy will be the only facility in southern Nevada of its kind and will include an existing range, a short game area, putting green and clubfitting equipment, including Track-Man technology. “It will have everything that a PGA TOUR player would like to have access to when he is working on his game.”

All of the changes are starting to attract visitors who haven’t been back to Lake Las Vegas since the public courses shut down a decade ago.

“Our biggest challenge is getting the word out that we are back open,” said Dutt. “Reflection Bay is a lot better than it was and getting better. Real estate sales featuring national home builders are robust.”

There are gated neighborhoods located throughout the community, with many different home options ranging from single-story starting in the mid $300,000s to custom-designed home lots along the North Shore.

What hasn’t changed through the years is the memorable location.

“If you brought someone to Lake Las Vegas and didn’t tell them you were in southern Nevada, they wouldn’t have a clue where they were,” said Dutt. “It’s distinct geographically. You can’t see the Strip from here. It’s a tranquil experience, and at night there’s not much ambient light, so you can really see the stars. It’s a destination unto itself, and it’s just 25 minutes or so from McCarran International Airport.”

There’s still plenty of room for improvement, according to Dutt. “We’re not done yet, by any means. We still have a long way to go. But it’s dramatically better than when we got here.” ▪