Those are the words spoken by U.T. Thompson III in his Rancho Santa Fe home this spring, 45 years after winning the SCGA Amateur Championship at Hacienda GC in 1969. He’s done a lot in those 45 years: started a family, built a business, traveled extensively. But throughout all that, golf never seemed to fully escape from the man’s life. 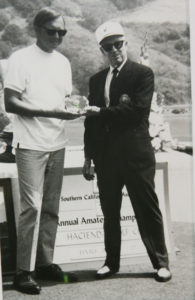 Having grown up in Laguna Beach, Thompson is a life-long Southern Californian. He stumbled into the game in high school, where he played competitively for two years before earning a scholarship to compete at UCLA. During his time as a Bruin, Thompson and his team won the Pac-10 Championship. But what stood out most to him during that time was the lifestyle he witnessed while practicing at UCLA’s home courses of Brentwood CC and Bel-Air CC.

“I had played some nice courses before college, but not like that,” he says. “That lifestyle was really eye-opening. I knew what I wanted to work towards.”

After college, Thompson went into the military, becoming a lieutenant in the Navy and was assigned to the Marine Core in Hawaii. “That didn’t stop me from playing a lot of golf, though,” he says, and with a smile at the memory tells us he won the Marines golf championship during his time serving.

When he came back from Hawaii, he ended up in law school. “It was just a fluke,” he says. But three years in law school and a job at a firm in Beverly Hills landed Thompson with a junior membership at Wilshire CC, where he was able to play in several tournaments and compete against some talented young golfers, including good friend Bud Bradley who went on to play on the PGA TOUR.

“I was practicing law but also trying to play enough golf to be able to compete,” remembers Thompson. “It was hard to juggle but I did it. I even played in the LA Open one year, but I just never wanted to completely devote my life to golf.”

Striving for the life he witnessed years before at Bel-Air, Thompson opted not to take the professional golf route, instead committing to a career in business. Not able to escape his love for the game, however, he was left with one competitive golf option: amateur events. In his late 20s, Thompson played in three SCGA Amateur Championships, finishing first, third and fourth in consecutive years, establishing himself as one of the finest amateurs in the state.

“My golf went in spurts back then,” he says. “When I was working towards a tournament, I was pretty good. When I was focusing on work, my game really wasn’t that good.” 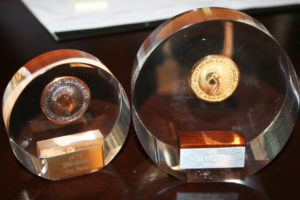 But then real life took over. Two years after his SCGA Am win, Thompson married his wife, Judy, and the two started a family. Competitive golf became less important.

“When Judy got pregnant, my goals changed dramatically,” he says. “I really zeroed in on trying to make some money. I used my legal skills to build a few businesses, entrepreneurial stuff really, but we were fortunate enough to be pretty successful.”

His wife interjects, giving some necessary credit to golf for that success.

“Despite not necessarily continuing to play golf competitively, golf has just been so good to him,” she says. “Starting with his scholarship, but continuing on to business. Golf has been a huge tool in [U.T.’s] professional life.”

And these days, golf is becoming an even bigger tool. Six years ago Thompson was diagnosed with Parkinson’s disease. It interfered with his golf … at first.

“My doctors encouraged me to get back out there and start practicing and playing,” Thompson, now a member of The Farms Golf Club in Rancho Santa Fe, says. “It’s good for my flexibility and balance. I just recently played for the first time in a year. Shot an 80. But I’ll admit, a change of attitude is required if you’re a good golfer and get a diagnosis like that.”

It seems clear that it’s a love for the game, and not just advice from doctors, that pulls Thompson back to the course. “Golf has been a wonderful thing for me,” he says. “The people I have met, the competition. I love to hit good shots. I love to sink long putts. And I love to practice. There are so many great things about golf, it really is hard to let go of.”