WHERE ARE THEY NOW?

A medalist at Q-Series, Muni He earns her return to the LPGA for 2020 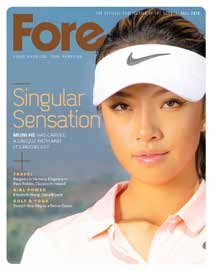 Back at Q-Series this past November, following an LPGA rookie season that saw her make eight cuts in 19 events, San Diego – raised Muni He proved her swing is as magnetic as her burgeoning Instagram account, which sports nearly 275,000 followers. Going under par all eight rounds across Q-Series’ grueling final stage in Pinehurst, N.C., the 20-year-old He went wire-to-wire during the latter week of play to claim medalist honors and author a 3-shot win and to earn her LPGA Tour card anew for 2020.

FORE: What surprised you about your rookie year on the LPGA Tour?

Muni He: Going into my rookie year, I knew it was going to be challenging, but I had no idea just how challenging. I’d heard from a lot of friends who were rookies before me, and they all told me it was going to be the hardest year. Most of the advice I received early on was from my former teammates as USC, Robynn Ree and Tiffany Chan. But, somewhere in my mind, I was still thinking to myself, “How challenging can it really be?”

What did you learn from the season?

Those challenges taught me so much in terms of practicing, traveling and the lifestyle. On the course, I learned about the best competition preparation and mentality. I learned that when I put too much pressure on myself, things never worked out very well. It’s important for me to be as relaxed as possible heading into a tournament. I will say that, on the LPGA, one thing that was a pleasant surprise, something I really came to appreciate, was just how much support you get out there in so many different cities, towns and fans from around the world.

In 2018, you won on the Symetra Tour. What’s the difference between playing Symetra and the LPGA?

It’s a much bigger stage on the LPGA. And, comparing it to the Symetra, when I had a good day there, I’d look up and see my name on the leaderboard. But on the LPGA, it’s just a different world, playing against the very best. You can have a good day and you’re in 30th place.

What was your mind-set going back to Q-Series?

Obviously, it’s not ideal to have to go back to Q-Series, after having already been on Tour. But I tried not to stress about it, and I just felt comfortable, confident. In a way, I just wasn’t nervous at all, which is kind of strange and bizarre to me; I even shocked myself.

And how did this tournament contrast with your Q-Series experience in 2017?

My first time through Q-Series, those two months were a real challenge and I was so nervous. And my family was nervous; and even though my parents and my coach were trying to comfort me and put on a smile, it was still very clear that we were all very tense and anxious. The last day of Q-Series in 2017, even though I was in a good position, I can recall being so nervous that day that I was feeling like I wanted to break down — not really the mind-set you want to have going into a tournament.

Did you have expectations of such a stellar showing this time around?

Knowing how many great players are there, no, I didn’t expect myself to do that. But, heading in, talking with my caddie and my agent and one of my sponsors, there was just a real comfort and a confidence that a top-5 finish was a possibility, even though I kind of just laughed that off at the time. A lot can happen in eight rounds of golf. But I had this mind-set that it was less of a competition, and just trying to play my game. And it was OK if I messed up. I had eight rounds; instead of being intimidated by that many rounds, I was thankful to have that much room to make up for any mistakes. And I did a really good job of limiting those mistakes, and seeing par as my friend.

SoCal was well represented at Q-Series’ final stage. Did that help assuage any nerves?

It’s funny, because Haley Moore [who earned her card with a tie for 11th] and I played together the first two days of Q-Series and, of course, it was held at Pinehurst. And I actually have a photo of me and Haley when we were like seven years old, both on the stage holding trophies for a U.S. Kids’ tournament at Pinehurst. So there’s this comfort to be, like, “Look at how far we’ve both come.”

Heading to 2020, will you alter your game plan in any way?

For the year to come on the LPGA, I’ll be looking ahead on my schedule and figuring out when I can take a break, even for a four- or five-week stretch, if that’s necessary. And now, having seen some the courses already, I know which courses fit my game a bit better.

I think there’s been some pretty good growth recently; nothing too crazy. But it has correlated (with the medalist finish) for golf fans and non-golf fans. And it is exciting to see people who may not have known me before now supporting me, following me, and I do appreciate that a lot. Social media growth isn’t something I think about that much, but the opportunity to connect with people all over the world is pretty cool.