It is a system that existed not so long ago at the Torrey Pines golf courses, but now seems as antiquated as speaking to a live operator or owning a cell phone the size of a brick.

Just more than a decade ago, golfers interested in securing a tee time at Torrey Pines had to get up at the crack of dawn, dial into the automated phone system and usually get the beep, beep, beep of the busy signal. It was like trying to be the 10th caller to get concert tickets from a radio station.

Today, getting a Torrey Pines tee time is still something like spinning a roulette wheel and hoping your number comes up, but at least now that can be accomplished while sitting in a restaurant, watching TV or playing golf.

Once far behind in the use of technology, the city of San Diego nowadays is on the leading edge of some of the best practical science there is for tee time reservations, GPS course mapping and keeping in touch directly with its customers.

In spring 2019, the city introduced a web app dedicated to making the experience of booking tee times at its Torrey Pines, Balboa Park and Mission Bay facilities easier and more interesting. On their mobile devices, golfers can reserve times, use the GPS to get yardage for every shot, keep score, track tournament scoring, check calendars and stay up-to-date on course happenings with push notifications. 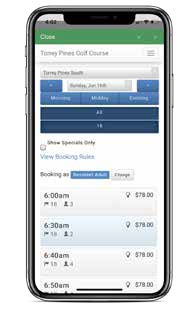 “The real genesis of this was, how can we leverage technology to better allow us to communicate with our customers?” said Mike Jones, a San Diego city golf manager who led the effort on the technological upgrade. “We’ve got a large amount of interest in our city facilities. We’ve got one of the most popular courses in the world in Torrey Pines. And how do we leverage that to not only benefit us but to make the experience better?”

They have done so in conjunction with a company that is about a 15-minute drive east of Torrey Pines: Gallus Golf. Founded in 2011, Gallus Golf is among the top companies producing golf apps.

CEO Jason Wilson said Gallus’ system is used by 800 golf courses, with facilities ranging from private clubs with a couple hundred members to municipal facilities such as those in San Diego, with more than 11,000 people having downloaded the app in its eight months of existence.

Fifty courses in Southern California use the Gallus system, Wilson said, including the 12 courses operated by the city of Los Angeles.

“It doesn’t matter what business you’re in — golf course, restaurant, church — in this day and age you have to find a way to engage and get information to your customer via mobile devices,” Wilson said. “The idea is that the more channels you have to engage customers, the better chance you have of getting in front of them.”

Over the last decade, golf courses became more sophisticated in using email lists to update golfers or offer specials. But with people being bombarded with spam, those have become less effective, Wilson contends.

The more advanced method of communication is push notifications that go directly to each consumer. For example, Torrey Pines recently dedicated a day to a double-shotgun start exclusive to city residents, and when it had some openings left, it sent out a notice to the public.

“The ability for us to reach out directly to our customers is huge,” Jones said. “It’s a two-way street. They’re looking for availability at the last minute, and we’re trying to fill out the tee sheet.”

Few courses see a demand like Torrey Pines. Annually, there are about 84,000 rounds played on the North Course and nearly 70,000 on the South. The current online reservation system allows golfers to book tee times seven days in advance, starting at 7 p.m. each evening. Within a few minutes, most of the times are gone.

“THE ABILITY FOR US TO REACH OUT DIRECTLY TO OUR CUSTOMERS IS HUGE. IT’S A TWO-WAY STREET. THEY’RE LOOKING FOR AVAILABILITY AT THE LAST MINUTE, AND WE’RE TRYING TO FILL OUT THE TEE SHEET.”

Mark Marney, San Diego’s deputy director of golf, said a big positive has been the ability for people to make eight- to 90-day advance reservations in the new app. Advance booking costs $30 per player for San Diego residents, $45 for nonresidents.

The San Diego municipal golf app was actually funded by local golfers. Through its agreement with the city, the Torrey Pines Men’s Club contributes 10 percent of each member’s $100 annual fee toward improvements at the facilities, such as new flagsticks or benches.

Two years ago, more than $10,000 in men’s club contributions went to the initial development of the app, according to TPMC President Roy Burchill. In the past year, the city used TPMC contributions in the high four figures to pay the annual fee for the app’s maintenance.

Burchill said he regularly uses the GPS on the app for his yardages and has found it to be extremely accurate. Since he plays Torrey Pines at least once a week, he also regularly uses it for reservations.

“It’s as easy as being on the computer,” Burchill said, “and the nice thing is that if you want to keep checking to see if something comes up, you can do that anytime you want.”

A huge improvement, and one far better than sitting with the phone cradled to your ear at sunrise. ▪

Find the San Diego City Golf App in Google Play or the App Store on your device!