Winter 2020
Home›Issues›Winter 2020›The Amex: In the Desert for the Long Term

The Amex: In the Desert for the Long Term

There was a time — not too long ago — when it was unclear if the PGA Tour would still have an event in the Coachella Valley by the year 2021.

As it turns out, not only does it still have one, but its future seems brighter than ever. Many factors played a role: its Southern California location, the tournament’s course offerings, time of year, the unbeatable climate, and the PGA Tour/major championships schedule. Not to mention that one of the country’s most powerful financial institutions has pledged its support for 2020 and the next four years.

When the American Express teed off in the valley recently, it marked a new era in the tournament’s history. Long known as the tournament Arnold Palmer built, the former Desert Classic evolved into one of the Tour’s can’t-miss tournaments in the 1970s when Bob Hope and Chrysler Motors ruled the roost.

However, when the celebrity element of the tournament began to fade, along with Mr. Hope’s health and Chrysler’s ability to support the tournament financially, the PGA Tour was forced to back the event itself while the search for a new, long-term title sponsor was conducted.

Sponsor hunts were hit and miss in the early 2000s. Health-care giant Humana and staffing consultants CareerBuilder both signed multi-year contracts to sponsor the event, but neither of those contracts were seen out. As few as six months ago, it seemed likely the Tour would have to step in to provide financial backing for a second straight year to keep the tournament ticking in its traditional January slot.

But when American Express signed on to a five-year contract late last year, everything changed. Bottom lines, confidence levels, belief and perceived long-term security all soared, along with fan and corporate interest.

In early November, it was announced that tournament ambassador Phil Mickelson would serve as the tournament host. Shortly thereafter, legendary Fleetwood Mac singer Stevie Nicks and country music sensation Luke Bryan were announced as the performers for the tournament’s Friday and Saturday night concerts, events that have helped to elevate the tournament’s image and pump up attendance. 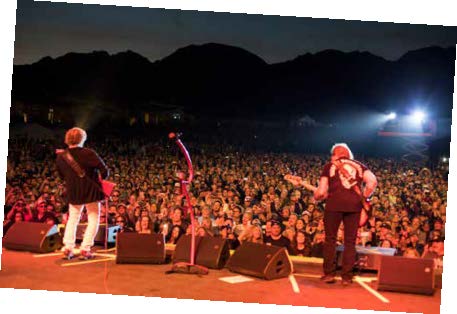 After the final putt dropped in 2020, no one was happier to hear positive reviews than tournament executive director Jeff Sanders. But he deflected all the credit to American Express, saying the corporation’s support ensures next year’s event will continue to raise the bar.

“Before we came in a couple of years ago, it seemed like there was a different title sponsor every year. One year, we didn’t even have one,” Sanders said.
“Now we have American Express for five years, so obviously, we’re on very, very solid ground here in the desert for the first time in many years. And as I’ve said before, if you’re in our shoes, and you’re trying to find, or hand-pick, the sponsor you’d like to have for this market, for this tournament, it’s American Express.”

Historically, the Coachella Valley PGA Tour event was used by players to shake off the winter’s rust, but it is now a crucial early season stop for the world’s best as they attempt to play their way into major championship form. Now that the Masters, the PGA Championship and THE PLAYERS Championship are all played before the end of May, the PGA Tour’s West Coast swing is more important than ever.

Whether or not that figured into American Express’ decision to leap into the title sponsorship role, Sanders can’t say. But he can say that as soon as Ameri-can Express came on board, there was an injection of energy, and a redoubling of efforts among tournament staff and PGA Tour officials. Uncertainty was replaced with concrete optimism, and Sanders believes the positivity was on display for all to see during this year’s event.

“It was an unbelievable year,” he said. “It was the first American Express, so obviously everyone could see that American Express is the title sponsor, and that they’re here for the long run. It really made the difference. The crowds we had out there each day watching the golf, with Rickie, and Phil, and all the great players … and then of course, there are the crowds on Friday and Saturday night for Stevie and Luke, I mean, I don’t know how we’re going to match that next year.”

Sanders and his team are already thinking about 2021, knowing American Express will be there for them then, and beyond. “We just signed the contract in September of 2019, so we’ve only had a few months,” he said. “For 2021, we have a full year to work on it, so we’re excited about that. Having American Express behind us makes things much easier, and we’ll have more time to make changes, make some improvements, and try to make the 2021 event bigger and better in every way.” ▪

First Cut: What Are You Wearing?