Think “dolphin,” and your mind conjures up traits such as “adorable,” “playful” and “clever.” Contemplate two dolphins and you double the fun. Apply the attributes to a golf course and you have the Twin Dolphin Club, the most distinctive new layout in Los Cabos, Mexico. Much like the creatures it depicts, Twin Dolphin is smart, sleek and inspires pure joy.

Friendly and laid-back, the Twin Dolphin Club course is a perfect match for the legend who co-designed it, Fred Couples. Nearby courses were authored by the Bear, the Shark and a Tiger — pretty fearsome-sounding. This one from the PGA Tour’s King of Chill?

“Playability was the prime consideration,” said Couples. “Twin Dolphin is the kind of course I can enjoy with my 15-handicap pals, as well as my fellow Tour pros. Sure, we could have put a few more teeth in the design, but we wanted a course that’s fun for everyone.”

Mission accomplished. Opened in November 2018, Twin Dolphin is hardly a pushover, at 7,156 yards, and par 72 from the tips. But with three sets of formal forward tees, three additional sets of combo tees and a set of 2,300-yard, par-61 niño’s (kids’) tees, flexibility is a strong suit. While there are several daunting forced carries over desert canyons for the big bashers, plus massive bunkers and vast arroyos dotting the layout, Couples and architect Todd Eckenrode of Origins Golf Design created countless helpful options, including welcoming kick-slopes and comforting width.

Ideally situated on a high hillside almost midway between San Jose del Cabo and Cabo San Lucas, Twin Dolphin rises and falls over tumbling terrain slashed by desert washes, which provide beauty, peril and strategic challenges. Exotic spiny flora in the form of cacti, trees and shrubs frames every hole. Rock outcrops backdrop many tees and greens. At virtually every turn, you’re delighted with panoramic views of the Sea. And it’s all natural, with nothing forced. 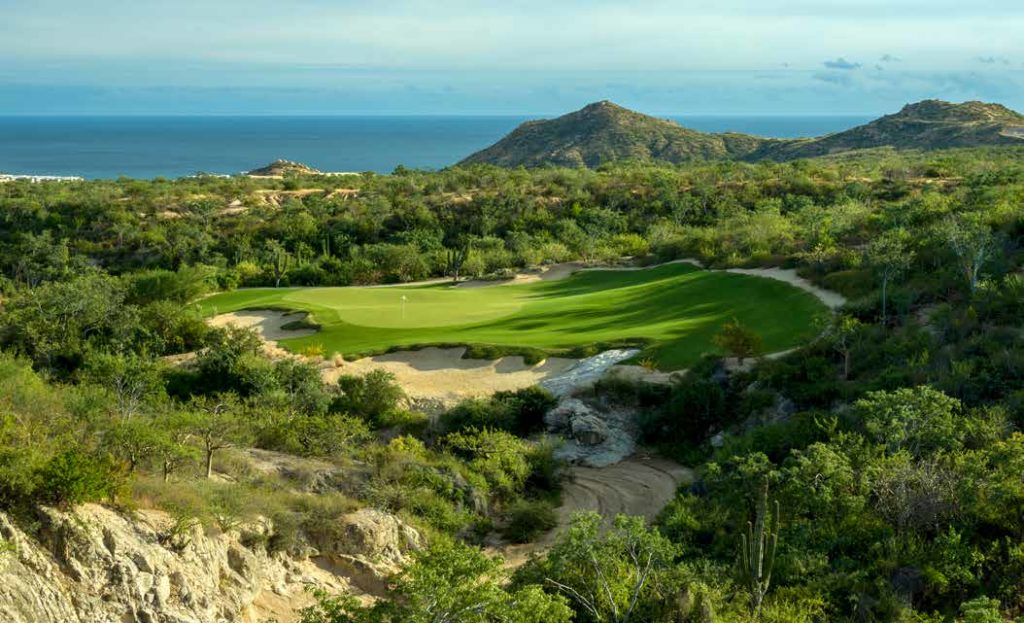 “We wanted to showcase the natural terrain,” says Eckenrode. “We tried to avoid that bulldozed, clean-edged look that so many courses feature. We chose to let the land be the star.”

Indeed, the formal (if jagged) edges of the golf course practically melt into the surrounding topography. Lacy-edged bunkers appear as if created by erosion, not by a bulldozer blade. Rather than import colorful exotic shrubs and trees, the architects and landscape team used only plants indigenous to the region. Fairways and green complexes hew so naturally to the existing contours that it feels as if the course was discovered rather than designed.

Still, it definitely was designed, and skillfully so. Perhaps most admirable is the variety. No single hole resembles another, and there is nice variation in distances, directions and shot demands. Most remarkable, however, is that each is sufficiently attractive and interesting that even if there were no ocean backdrops, the course would be stimulating to play every day. The firm and fast TifGrand Bermuda fairway turf and TifEagle Bermuda greens provide for plenty of run and ground game options into the greens.

Picking standout holes is easy with so many to choose from. Couples claims he “loves par-5s that make or break your round.” Surely he must be enamored with the 6th. At 517 yards, it’s easily reachable by Freddie and his pro pals. Thanks to the inspired design, it’s also reachable by normal folks. A left-side bunker some 20 yards short of the green will snare anything close to it. Carry it, however, and in classic risk/reward fashion, a broad slope will help transport your ball all the way onto the green.

The 389-yard, par-4 9th tangles with a deep arroyo on the tee shot, followed by an approach to a green framed by massive bluff walls. The 416-yard, par-4 10th is Eckenrode’s homage to Alister MacKenzie’s 11th at Pasatiempo, with its fairway bisected by a canyon-like hazard.

Eckenrode’s favorite hole, certainly for dramatic scenery, is the drop-shot, drop-dead gorgeous par-3 11th, which plunges you into and over an arroyo. Yank it left and a bunker and oblivion await. Miss it right and a friendly side-slope will direct your ball toward the intended target. Holes 14 to 16 yield spectacular ocean vistas, culminating with the 16th and its one-of-a-kind split fairway, divided by a twisting arroyo with a sandy bottom.

If you believe Couples was present just for the ribbon cutting and to cash the check, think again. Freddie has made Twin Dolphin his home away from home. He spends six weeks a year on property and states that he was more involved on the design side than on any other project he’s worked on worldwide.

“TWIN DOLPHIN IS THE KIND OF COURSE I CAN ENJOY WITH MY 15 HANDICAP PALS, AS WELL AS MY FELLOW TOUR PROS. SURE, WE COULD HAVE PUT A FEW MORE TEETH IN THE DESIGN, BUT WE WANTED A COURSE THAT’S FUN FOR EVERYONE” – FRED COUPLES

Freddie is also fond of the Red Door halfway houses/comfort stations located at the 5th and 12th holes. Soft chairs, giant-screen televisions and food and beverage options that range from snackable to full lunch arrive practically as soon as you do. Couples is partial to the cheeseburger sliders, which are delicious. I enjoyed a surprise birthday cake slice, which was so tasty I should have asked for seconds, a thought that popped into my brain after I faded my second into the desert on the 13th.

With all of these niceties, and minimal play, a round at Twin Dolphin is quick, and one to be savored. Access, as with most recent Cabo entries, is limited. The club is private, with membership 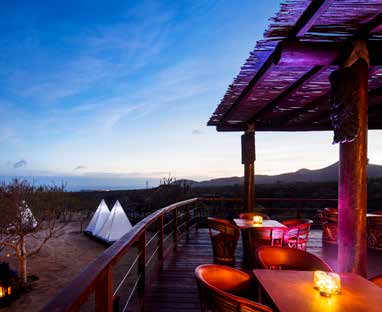 available to owners of the Montage Residences or Maravilla, both within the Twin Dolphin community, master planned and developed by Ohana Real Estate Investors. Several tee times each morning and each afternoon are also made available to guests of the Montage Los Cabos, the first international Montage resort property.

In short order, Montage has acquired a devoted following in the U.S., and it’s rapidly extending to Mexico. The 122-room hotel enjoys an enviable location, overlooking Santa Maria Bay, and possesses one of Cabo’s best (and only) swimmable beaches. The room amenities and property attractions, including one of Los Cabos’ largest spas, are five-star, but the service levels burst the five-star ceiling to whatever is next. Truly memorable is beachside dining at Marea; try the grilled, freshly caught shrimp tacos and a frosty cerveza. Follow that with dinner at Mezcal, which serves up sea views and innovative fare that celebrates Mexican heritage with a blend of modern and historic influences.

The 52 Montage Residences come in two- and three-bedroom flavors and feature ocean views and every modern convenience. Next door is Maravilla Los Cabos, a private residential community and club on 260 acres, which steps up the luxury component another notch. Ocean-view villas, townhomes, custom homes and homesites are available for those who have achieved the most and who demand the best. Lunch at the Santa Maria Beach Club and dinner at Ecco will spoil you for anything that comes after.

Twin Dolphin Los Cabos takes its name from a renowned luxury hotel that once occupied the site, and you can go to this web-site to check them out. Nostalgia notwithstanding, what replaced it is significantly better. From the golf to the Montage resort hotel and residences to the remarkable Maravilla development, the new Twin Dolphin community has raised the bar in Los Cabos. “I feel really good about what we’ve done with Twin Dolphin,” says Couples. If it weren’t for his bad back, I’d tell him to take a bow. ▪