Best in Class: The Outstanding Courses of Central Oregon

Ah, the joys of progress! One needn’t saddle up the horses and steer the Conestogas toward the Oregon Trail to reach the western edge of the continent any longer, nor to play some awfully good golf in some of the most eye-catching settings imaginable. Nope, just book an airline ticket into beautiful Bend, Oregon, rent a horseless carriage and keep your left arm straight for the duration of the arduous journey. Canteen optional. And while Bandon Dunes Golf Resort — perched over the ragged Pacific coastline several hours drive from Bend — dominates the headlines in these parts, Pronghorn and Sunriver are two other compelling reasons to visit central Oregon. An informed guess is that you’ll be scanning real estate listings within 24 hours of your arrival so bring a pre-approval letter and check this zillow.com homes for sale. 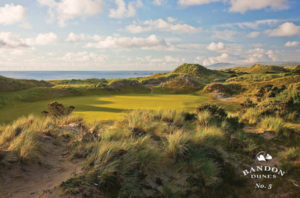 It’s no longer a well-kept secret — Bandon Dunes is a one-stop, bucket-list golf destination — a Disneyland for plaid-clad bad boys of a certain age; a slice of auld bonny Scotch links minus the double greens and the post round haggis. Of course, they do serve some mighty good Scotch in their wood-paneled bistros, along with some tasty fare that goes down quite well after a day’s worth of battling on the links.

The brainchild and passion project of greeting card magnate and golf visionary Mike Keiser, Bandon Dunes is the exception that proves the rule about remote locations making for bad business: build a good enough layout and people will come from all corners of the globe to give it a whirl. Make that four excellent courses and cozy digs to sleep off the rigors of 36-hole days and you’ve got recipe for success — both aesthetically and financially.

Though women are indeed welcome at Bandon Dunes, the first thing you notice when you reach the sandy bluffs above the crashing Pacific is that you are in a very male enclave, a place where golf carts are verboten, seasoned caddies abound and the walking-only pace of play is quite brisk.

Though golfers of all abilities can enjoy Bandon Dunes, this is not a hacker’s resort by any stretch. The wind blows hither and yon, the rain can come in cold and sideways and precise shot-making is required at almost all times — not that that’s a bad thing. If you can make a decent number at any of the four layouts here, you’ll have a good war story to tell to the fellas back home.

Bandon Dunes — the resort’s namesake track and the first to be built in 1999 — is a David McLay Kidd design and easily the most forgiving on property. There are generous looks from the tees, and the greens tend to undulate less than the other courses on property. Gorse and fescue are native to these parts, as are sand dunes, so the Scottish feel is no accident at Bandon; it’s in the very DNA of the land. 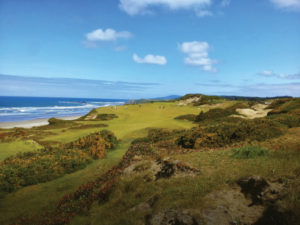 It thus makes sense that Keiser’s next hire was classicist Tom Doak, who’s Pacific Dunes has a deceptively rough-hewn look. It starts in a stand of pines, wends close to the sea and is liberally pockmarked by bunkers sculpted by Ma Nature herself (versus the usual backhoes and blueprints). At 6,633 from the tips it appears less fearsome than it plays when the wind is up, which is nearly always. Listen to your caddie closely and bring utility clubs — favor earth over sky and pray for good kicks and the odd flat lie.

Bandon Trails – courtesy of Bill Coore and Ben Crenshaw — is a lovely and less strenuous walk, traversing sand dunes, meadows and a coastal forest; while Old Macdonald is another Doak classic, in cahoots with long-time colleague Jim Urbina. Its American links style is a tribute to C.B. Macdonald, the godfather of American golf design. Fine fescue prevails throughout, making putter a good choice even when 20 yards off the massive greens. Still hungry for birds after a long day? Bandon Preserve — Coore & Crenshaw’s 13-hole par-3 course — proves that old saw about good things and small packages. Great place to make wagers as well.

Five hours drive northeast from Bandon takes you into the high desert surrounding Bend, Oregon, in the midst of what might be the largest juniper tree forest in the world. The snow-capped Cascade Mountain range borders the western edge of the region, which is home to nearly 30 golf courses — including two distinguished tracks at Pronghorn, a residential golf community set on 640 pristine acres. Opened in 2002, Pronghorn is deftly managed by Auberge Resorts and is in the midst of an ambitious expansion. 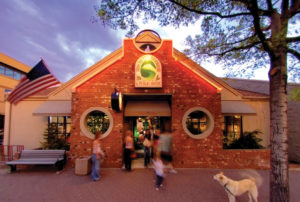 After the golf-centric experience at Bandon, Pronghorn is replete with high-end creature comforts. The new Lodge (expected to open in late 2015) will feature a full service spa and luxurious guestrooms. For now, you can rent a variety of spacious digs (up to four bedrooms), all situated along the 18th hole of the resort’s Jack Nicklaus Signature golf course. Kitchens include Sub-Zero and Wolf appliances, should you want to whip up a soufflé after a long day on the links. If not, there are plenty of toothsome dining options on property.

As for that course that Jack built, you’d be hard-pressed to find a more unspoiled setting, with the aforementioned mountains rising dramatically to the west, and a preternatural quiet presiding throughout. At nearly 7,400 yards from the back tees, the Golden Bear has crafted a player’s golf course, but one which runs hard and fast enough to reward a well-managed game. A couple of drivable par-4s make up for other holes that ask some lengthy approach shots, but on the bright side — at an altitude of 3,600 feet — your ball may travel up to 20 percent farther here in the high desert.

Tom Fazio’s sister course at Pronghorn is intended for the exclusive use of club members, a great reason to sell the second Bentley and drop a down payment on a small shack here. While the entire layout is studded with lava rock outcroppings and dramatic vistas, the 187-yard par-3 eighth will remain in the mind’s eye long after your visit ends. After dynamiting a stretch of desert to make a chasm between tee and green, a “lava tube” was revealed — two underground caves that frame the putting surface in stunning fashion.

If winter chill (and occasional snow) coincides with your visit to Pronghorn, have no fear. The city of Bend is a wee 20-minute drive and home to more craft breweries per capita than any other city in Oregon. And those with a yen for the outdoors will find rocks to climb, rivers to raft and plenty of challenging slopes to ski. Or just stay at the resort and swim, mountain bike, play tennis or hit the well-appointed fitness center. And the restaurants — Cascada and Chanterelle — serve up delicious, locally sourced specialties. Don’t leave without trying the veal and fennel sausage Bolognese, a very comforting way to end an action-packed day. 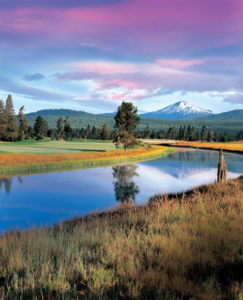 Just 20 minutes south of downtown Bend is Sunriver, a world unto itself with 3,300 acres of residential and resort accommodations built on the former site of Camp Abbot, a World War II training facility. There are more than 4,000 privately-owned residences, making for a permanent population of around 1,700 souls, which in peak vacation season swells northward of 20,000. The Sunriver Resort includes four golf courses, a lodge complex, an airport, marina and even horse stables.

The Deschutes River winds its way through Sunriver, a dry lake bed that birthed one of the Pacific Northwest’s loveliest meadows. Golf architects John Fought and Robert Trent Jones, Jr. have taken full advantage of the open spaces, boasting clear views of nearby Mount Bachelor, a magnet for downhill types who flock to the resort during the winter months when the golf course may be more white than green.

RTJ Jr.’s Woodlands course is dotted by water features and lava rock outcroppings, and is well-known for its superb conditioning and bedeviling winds whipping up in the afternoon. Looks off the tee can be narrow — the fairways ever bordered by towering pines — and the bunkers are often deep enough to warrant laying up. Aggressive play is rarely rewarded here, though the greens are somewhat less subject to huge bends and breaks than its sister courses. At 6,880 from the tips, Woodlands demands less brawn than brain, an organ in sometime short supply when wielding a golf club.

John Fought’s Meadows track is considerably kinder to a resort-level golfer, especially those who favor walking over an electric cart. But despite the relatively flat topography, there are ample water hazards to avoid, and plenty of inviting white-sand bunkers beckoning for wayward shots.

Designed by Bob Cupp and built on a 600-acre parcel of woodlands and wetlands, Crosswater is a heathland-style course on which you’ll want to slow down, breathe and figure that the two boxes of balls you launched into the water were worth the amazing views of Mt. Bachelor. It’s consistently rated as one of “America’s 100 Greatest Courses” by Golf Digest, and better players will appreciate its demanding shot values and undulating greens.

Accommodations run the gamut at Sunriver, from five-bedroom homes to Lodge Village guestrooms. All straddle the fine line between luxury and ski-lodge coziness, with stone gas fireplaces and kitchenettes. Comestibles at the Merchant Trader restaurant were uniformly excellent, especially the Bavarian pretzel sticks and the acre of parmesan/garlic French fries. That and a Black Angus burger and you will hit the sack with a resounding thud.

Indeed, with hard-fought golf, clean air, off-course fun, great food and soft beds, sleeping soundly is not a problem in this part of Oregon.