Hawaii may be more of a family destination, or beach destination, than a “golf destination” in the true sense of the word. But if you pick the right resorts, the golf courses are as good as they get. No matter the island you choose to visit, you can find courses that will make you want to trade in your “slippahs” — as the local folks call flip-flops — for golf shoes. Or, try something altogether new and play barefoot as the Merrie Monarch, King David Kalakaua, used to do. 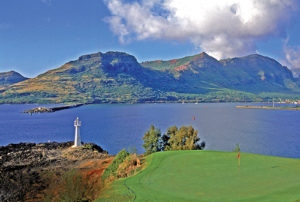 Colorado-based Timbers Resorts, renowned for the quality of its resort and residential projects in such prime locations as Aspen, Napa Valley, Scottsdale and Tuscany, recently announced an expansion of its portfolio to the island of Kauai, where they are taking over large parts of the development formerly known as Kauai Lagoons, renaming it Hokuala.

A Marriott Vacation Club along with a Jack Nicklaus Signature golf course already occupy the 450-acre oceanfront parcel, with Timbers picking up oversight of the golf course, shopping areas, and residential units.

Along with some renovations planned to start in spring, the golf course is being renamed The Ocean Course (it was formerly known as Kiele). Long been regarded among the top three or four in the state, The Ocean Course features the longest continuous stretch of oceanfront holes in Hawaii, Nos. 12-16.

The front nine runs across open fields toward the towering mountains in the center of the island, across a mango forest to an elevated green on the thrilling par-three No. 5 hole, and emerges at the ocean on No. 12. It’s Kodak moment after Kodak moment from there, climaxing at the green on No. 16 next to a picturesque lighthouse before heading back to the clubhouse on 17 and 18, finishing on a tough-to-hit island green.

“The big push we’re making now,” says Mike Cuthbertson, managing director, “is on the front nine. It’s a shotmaker’s paradise out there. But with the renovations that were made to the back nine in 2011, the two sides have different character.”

The renovations that will start in spring include adding new silica sand in the bunkers, and stripping and rebuilding greens to match playing characteristics of the back nine. The holes will reopen next November, although resort guests and the public will be able to play the back nine twice in the meantime. 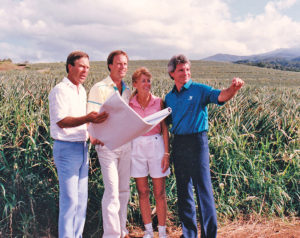 On the western shore of Maui, Kapalua is celebrating the 25th anniversary of the Plantation Course in 2016, kicking off the year with the Hyundai Tournament of Champions (January 6-10, 2016). On television, viewers are treated to magical views of whales leaping in the blue Pacific waters and verdant green mountains tumbling down to the shoreline, while the best golfers in the world tackle the 7,411-yard layout.

“The single most important thing that ever happened to Kapalua is the golf tournament,” says Mark Rolfing, now an NBC golf commentator, but whose career in golf started at Kapalua in 1976, three months after the Bay Course opened, when he got a job washing carts. By 1982 he was director of marketing and recreation at the resort, and having seen two management companies at Kapalua Bay Hotel struggle to gain market share, Rolfing had an idea.

“I saw the success of the Hawaiian Open over at Waialae CC (Oahu),” he says, “and I was able to convince Colin Cameron (patriarch of the family that owned Maui Land & Pineapple) that we should do the same.”

Thus was born the Kapalua Open in 1982, won by Hawaii’s own David Ishii. In 1983, with strong support from Arnold Palmer to bring a top field of players to Maui, the tournament was renamed the Kapalua International, and a young gun named Greg Norman won in what was his first victory in the United States.

And while the PGA TOUR pros show up in January — if they’ve qualified with a win during the previous year — you and I can book a flight to Maui and enjoy Kapalua’s warmth, hospitality, and championship courses anytime of the year. 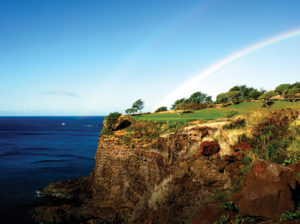 Across the channel from Maui — a nine-mile ferry ride from Lahaina — is the quiet island of Lanai. Once dominated by pineapple fields, Lanai is now a luxury resort destination, with two Four Seasons hotels — one down at the beach and the other an upcountry Lodge — and two extremely scenic golf courses.

One of the hotels, the Four Seasons Lanai, has just undergone a complete “reimagining” and is set to reopen on March 1, 2016. Set upon towering cliffs adjacent to the hotel is the memorable Jack Nicklaus-designed Manele GC (formerly The Challenge at Manele), one of the most visually striking courses in the state with 18 ocean view holes.

“There hasn’t been any hard design work,” says Lori Holland, director of public relations, “but when Four Seasons took over the management of the course, efforts have focused on enhancing the greens and improving the experience guests. The golf course itself is in the best condition it has been in for years, and views have been opened up from many of the fairways, providing unobstructed views of the ocean from almost every hole, a definite differentiator for this course.”

Holland says the golf shop and VIEWS restaurant have been renovated, and “sustainability will also be a focus as we work towards Audubon certification, a designation for courses that take extra precautions to preserve nature and have solid agronomic practices to preserve the environment.”

On the hotel side, the comprehensive renovation features 217 redesigned guestrooms including 51 suites, newly refurbished lobbies and seating areas, additional dining experiences such as the award-winning NOBU Lanai and ONE FORTY, American Steak, Hawaiian Seafood, a renovated spa, and luxury retail boutiques featuring Missoni, Jimmy Choo and the Lanai Collection.

Meanwhile, work will continue throughout 2016 on The Lodge at Koele and its adjacent Koele GC, both set in Lanai’s cool mountain upcountry.