Whenever I covered a tournament at Torrey Pines or played the seaside municipal courses, the big, colorful birds known as paragliders and hang gliders enthralled me as they soared along the cliffs and over the Pacific.

I’d flown over San Diego in nearly every mode imaginable — plane, helicopter, hot air balloon and blimp — and yet flying with what amounted to a parachute always looked the most appealing. It seemed the closest thing to the flight of birds, and who hasn’t wanted to sprout wings and float in peace above the earth?

The trouble was that after most of a lifetime spent in San Diego, I didn’t know how easy it was to actually do until my wife bought me a gift certificate for my birthday. That, of course, drew jokes like, “Has she upped the life insurance policy lately?”

Ultimately, over the summer, when I finally got to paraglide in tandem with an experienced pilot, there wasn’t one single moment of fear, and I was completely exhilarated by one of the greatest experiences of my life. 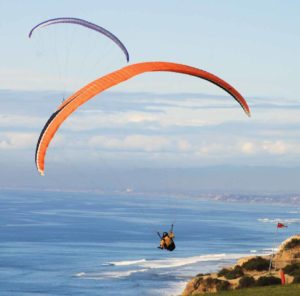 What does that have to do with golf in San Diego?

Everything, because I would challenge most other golf destinations in the world to afford so much quality, affordable public golf in combination with the bounty of activities and attractions San Diego has to offer.

Name another major metropolitan city that, within an hour of its airport, boasts golf courses on the ocean, in boulder-strewn hills, in stands of old-growth oak and sycamore trees, with views of the mountains or city skyline. Or where a morning of golf can be followed by visits to some of the country’s top tourist attractions, or to wineries, breweries and historic sites, or to somewhere off the beaten path, like the gem that is paragliding, hiding in plain sight?

Not more than 10 minutes from any of downtown San Diego’s hotels is a municipal course not well-known to most out-of-towners. It deserves more love.

Balboa Park GC celebrated its 100th anniversary in 2019 and offers a hilly challenge and spectacular views of the skyline. This is a favorite course of Phil Mickelson’s family, the site of Junior World victories by Ernie Els and Amy Alcott, and the course record of 60 was set by World Golf Hall of Famer Sam Snead in 1943. Don’t let the municipal label worry you: The fairways are among the best in the county.

The Spanish-style clubhouse is a designated historic site, and any visit demands a meal at the homey Tobey’s 19th Hole Cafe, where you can gawk out the back window at the city below. 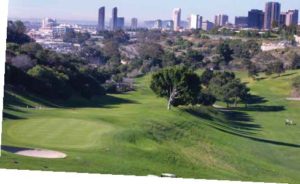 It’s a very short drive from Balboa to the San Diego Zoo, museums of Balboa Park and all the night life you could want — maybe dinner and dancing in the Gaslamp Quarter or a more cultural evening of taking in a play at the Old Globe theater.

Only a short bridge ride over San Diego Bay is another must-play muni track, Coronado GC. It’s my first suggestion when visitors ask me where to play. The flat course with all-kikuyu fairways and excellent greens provides stellar views of the bay and skyline and the wonderful and varied architecture of the island’s homes, and it builds to a crescendo near the famed Hotel Del Coronado.

After a round, walk the grounds of the Hotel Del and stroll the best traditional Main Street in San Diego, Orange Avenue. Rent a bike and take a ride to the landing on the east side, where you can catch a ferry and pay very little to get a cruise on the bay.

If it’s family golf you want, head to Mission Bay GC and Practice Center. This well-kept, 18-hole executive course is a short drive from SeaWorld, the Belmont Park roller coaster and some of San Diego’s most popular beaches. Footgolf is available and Mission Bay is lighted at night, so you can enjoy a full day of fun and still get in a round in the cool of the evening.

There’s an abundance of good golf choices in what locals call North County, an area that incorporates Rancho Santa Fe, Encinitas, Carlsbad and inland communities that extend all the way to the desert.

The top of the list in North County includes Rancho Bernardo Inn, managed by highly regarded JC Resorts, Maderas GC in Poway, which rates 4.5 stars out of 5 on Golf Advisor, and Mt. Woodson GC. Guaranteed, you’ve never seen anything like Mt. Woodson, a target golf course in a spectacular setting of massive boulders and oak trees. It’s nearly worth the green fee just to drive the wooden “Indiana Jones” bridge that takes you from the second green to third tee, and be sure to visit the adjacent Mt. Woodson Castle and its windmill tower, built in 1921. 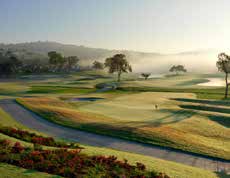 If you’re in San Diego during the fall, up the hill from Escondido in Valley Center is Woods Valley GC, and it’s a short trip from there to Bates Nut Farm, to which locals flock to pick Halloween pumpkins and buy fruits, nuts and chocolate goodies in the western-motif shop.

On the coast, of course, is Torrey Pines GC, which should be on every golfer’s bucket list. Play the South Course if you can, as this is where the history is made and the tournaments are won, plus the stretch of holes on the cliffside are stunning. The North is a tremendous round of golf as well.

North of Torrey, there aren’t a lot of courses near the water, the closest being Aviara GC in Carlsbad, part of the Park Hyatt Aviara Resort Golf Club & Spa. The course is arguably the area’s most beautiful because they somehow seem to grow gorgeous flowers year round. Nearly across the street is the Omni La Costa Resort and its two championship courses that have a PGA Tour history that dates back 50 years. Both are about 15 minutes from Legoland, and for a more serene outing, there are the San Diego Botanical Gardens.

Before the boom of construction in the north, the heart of San Diego golf was in East County. To this day, the centerpiece is the Singing Hills Golf Resort at Sycuan. It offers the most choices of any facility, with 36 impeccably maintained holes and a par-3 course. You also can’t ask for much livelier accommodations than the Sycuan Casino Resort, which recently underwent a $260 million renovation and expansion. 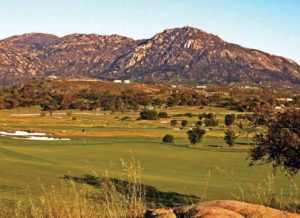 Add in 27 holes at Steele Canyon GC, with its fun elevation changes, and 18 more at venerable Cottonwood (a bit rough around the edges these days), and that’s 81 championship holes in a radius of a couple miles.

Finally, there’s another Indian casino/hotel course that should not be missed. Barona Creek GC is consistently on Golfweek’s designation of the best public courses in California.

The course sits in a valley occupied by the Barona Band of Mission Indians, and the tribe could not have produced a better track to highlight its land. The layout is unique to Southern California in every regard. The style is inland links, with only a few oaks dotting the expanse. The bunkers have craggy edges and the large greens are nearly pro tour-fast. There’s not a building on the course other than the skyscraper hotel, and from the highest point you can see nearly every hole.

It is simply a serene and soulful place to play and representative of the quality, diversity and scenery San Diego golf has to offer.