COMMUNITY, FAMILY, MENTORING, GIVING BACK … AND, OH YES, GOLF TOO

That’s where he found himself on Christmas Day 1981, a struggling stand-up comedian trying to eke out a living, contemplating what he wanted to do with his life. That’s where he went to be alone with his thoughts, to dream of what he wanted to be. Where he bought his first set of golf clubs for $300, which represented more than half the money he had at the time. Where he went to enjoy the simple, mind-cleansing pleasures of an activity as easily enjoyed alone as with good friends. And it’s where he still goes today to be with the extended family that adopted him before his days as a world-famous entertainer.

El Cariso is where 1991 and 1993 USGA Amateur Public Links Champion David Berganio learned to play the game before heading off to lead the University of Arizona to the NCAA Golf Championship, along the way wining virtually every

L.A. area city title and the 1991 Pacific Coast Amateur Championship. It’s the course he too still calls home, the course to which he keeps returning when the two-time Masters and six-time U.S. Open competitor isn’t traveling to play some of the world’s greatest championship tracks.

“It may be an executive course, which causes many to overlook it, but it’s a course that taught me how to hit every club in my bag and a course that once you play, you are sure to go back,” says Berganio. 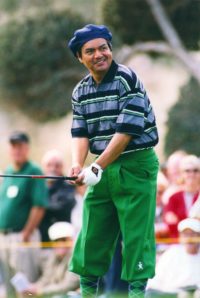 El Cariso is where you might find Troix Tonkham, a 24-year-old competitor on the Asian Tour from the northeast San Fernando Valley, who took up golf only because the City of Los Angeles offered free junior programming and transportation to Griffith Park’s Tregnan Golf Academy when he was a young boy.

“My family didn’t belong to a country club,” said Tonkham, who parlayed his golf skills into a scholarship to Fresno State. El Cariso is where he practices when he is not off to some far-flung place pursuing his dream of competing on the PGA Tour.

El Cariso is where the members of the local clubs raise arguably more money for charity than any other municipal golf course in Southern California. It’s where the men’s golf club will host its 41st fundraiser this December for the Los Angeles Fire Department’s Toys for Needy Children. Where co-chair Frank Rodriguez estimates that he and his club members have raised well over $650,000 in those 40 years.

El Cariso is where the members also raise significant amounts of money annually for the Muscular Dystrophy Association and the American Cancer Society, and where dozens of club members form the backbone of the volunteer force that supports the City of Los Angeles’ annual Thanksgiving “open house” at Pacoima’s Hansen Dam Recreation Center.

El Cariso is where 78-year-old Ray West and roughly 40 senior golfers tee it up every Thursday afternoon — the “only senior-friendly, senior-walkable golf course in the San Fernando Valley,” according to West.

El Cariso is where longtime Verdugo Hills High School boys and girls golf coach Scott Kemple estimates some 20 schools in addition to his call home, where 30-year member of the El Cariso men’s golf club Gary Donatella coached the Sylmar High golf team for years before retiring a few years ago. Where, according to Donatella, “we have had to fight for everything, but always seem to get less than Los Angeles County’s other municipal golf courses.”

MAYBE OUR COURSE DOESN’T GENERATE THE KINDS OF DOLLARS THAT THE COURSES IN GRANADA HILLS OR ARCADIA GENERATE, BUT YOU CAN’T PUT A PRICE ON WHAT EL CARISO DOES FOR THIS COMMUNITY. WE’RE A FAMILY AS MUCH AS A GOLF COURSE.”

THAT’S A COMMON THEME you hear when you visit El Cariso. The facility is a gem in a part of the city where too few community gems exist, but fails to command the attention of a county seemingly more interested in other facilities, and not just facilities in upscale communities, but facilities in areas of the county demographically similar to Sylmar.

It’s what leads the locals and the members of the very active men’s, women’s and senior golf clubs to speculate that the course’s days may be numbered — that and the ever-expanding needs of LA Mission College, which sits next door. “It’s not that the College isn’t important to the northeast valley,” says Mission College graduate Berganio; it’s very important, but so is El Cariso GC. There is just nothing like it in our community.”

“Maybe our course doesn’t generate the kinds of dollars that the courses in Granada Hills or Arcadia generate, but you can’t put a price on what El Cariso does for this community,” says El Cariso GC board member Ruben Cerrillo. “We’re a family as much as a golf course.” Fellow Board Member Alex Perez would agree. He is an engineer at Pasadena’s Jet Propulsion Laboratory (JPL), but recently moved back to Sylmar just to be close to El Cariso.

Family, community, mentoring, giving back … these are themes you hear on a visit to Los Angeles County’s solitary executive golf course. Themes in an abundance rarely matched anywhere else. Themes that communities such as Sylmar desperately need. Themes reminiscent of an era when public spaces were honored more for their community resonance than their capacity for revenue generation. Themes that merit nurturing, not ignoring.

Two of the pillars of Los Angeles County Parks & Recreation’s three-pronged mission are: (1) Build healthy and resilient communities and; (2) advance social equity and cohesion. It’s hard to find a place in this nation’s most populous county that advances those missions more than El Cariso.