From the air, the Coachella Valley looks like a jigsaw puzzle of more than 2,000 grassy configurations. That number represents the staggering sum of 4.25-inch wide holes in this California desert playground. Deciding which 18 or 36 you want to play can be a difficult task. Add to that the myriad accommodations that are available as your home away from home, and yes, planning a golf getaway to this renowned destination can sometimes be intimidating. Unless, of course, you zero in on La Quinta Resort & Club.

One glance at the extensive collection of amenities at this posh property located at the foot of the Santa Rosa Mountains is all the convincing necessary to realize why it rises to the top of the deck. A stay here further validates why legendary film director Frank Capra chose this blissful setting to script his classic movie, It’s a Wonderful Life. 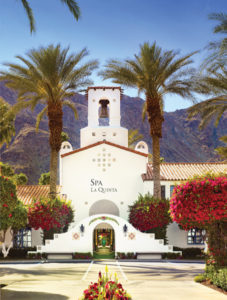 Today, with “Joe Guest” playing the lead role, this beautifully-manicured refuge delivers a stellar supporting cast of 620 casitas, 98 villas, 23 tennis courts, 41 outdoor pools, a 23,000-square-foot spa, two top-notch golf courses (and several more at nearby PGA WEST) and, to placate visiting canines, 10 pet relief stations. This many frills under one resort umbrella constitutes more than what might be found in many single destinations.

Nearly 70 years after Capra’s feel-good film hit the big screen, the curtain has been raised on a new era for La Quinta Resort. What premiered in 1926 as a hacienda-style hotel with 20 casitas, constructed for $150,000, the iconic property recently became the benefactor of a multi-million restoration that has kept intact its old California charm, along with enhancing its status as the quintessential desert retreat for relaxation and rejuvenation.

“As we moved forward, one of the key focuses was maintaining the historical aspects and we looked at this not as a renovation but as a restoration,” says Chris George, director of marketing at La Quinta Resort & Club. “Every step along the way, we kept in mind the history and tradition of the resort while at the same time bringing in some of the contemporary amenities savvy travelers have come to expect, such as USB charging ports, reading lights built into the bed headboards or refrigerators with built-in ice makers. These are the little touches that add to the overall luxury experience.”

The opening scene commences with a resort familiarization session at the front desk, where guests receive a colorful map of the 45-acre layout. If you’re a newbie, after being escorted to your casita by one of the bellmen, you’ll be relieved to have the reference for navigating the maze of pathways weaving between the guestrooms clustered around the plethora of pools and spas. But if you do happen to find yourself wandering aimlessly, stop and smell the roses … and bougainvillea and citrus trees planted throughout the grounds and appreciate the Spanish-style architecture that was originally molded from more than 100,000 hand-formed adobe bricks and 60,000 locally fired roof tiles. 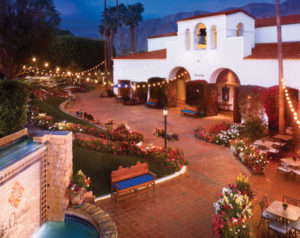 The reality is, all paths eventually migrate towards The Plaza in the heart of the resort, the hub for shopping, entertainment and dining. Here you’ll find a variety of options to reward the palate, including the American bistro-style Twenty6; the Adobe Grill, specializing in Mexican cuisine; and or Morgan’s in the Desert, where three-time James Beard award-winning chef, Jimmy Schmidt, prepares his farm-to-table dishes.

“Foods in season taste the best and are the highest in nutritional value,” says Schmidt. “Working closely with our farming families in the Coachella Valley, we are able to capture these foods at the absolute peak.”

When you’re ready to hit the links, there are 90 golf holes available to guests of La Quinta Resort & Club. Although all five courses are situated off-property, two (Mountain and Dunes) are merely separated by a strip of homes next to the main resort and the other trio is a short drive away with shuttles provided. Regardless of location, with a designer hand comprised of two Pete Dyes, two Jack Nicklaus and one Greg Norman, the odds for a memorable round are in the golfer’s favor.

The Mountain and Dunes courses were both conceived by Dye in 1980 and 1981, respectively. But it was his third 18-hole creation at PGA WEST that has garnered most of the accolades. The TPC Stadium Course (1986) was originally built to host the 1991 Ryder Cup (eventually played at Kiawah Island Golf Resort), and over the years has provided countless adrenaline rushes well beyond Trevino’s famous ace at hole No. 17 in the 1987 Skins Game. Adding to the drama, this trophy course served as a biennial host to PGA TOUR “Q-School” Finals, and the tournament slope rating of 150 inflicted a nightmarish end to many golfers’ dreams. “Golf is not a fair game, so why build a course fair?” Dye once said. 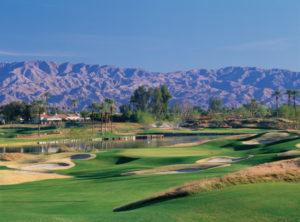 Rounding out the quintuplet of golf venues is the Jack Nicklaus Tournament layout, a slightly tamer version of TPC Stadium that includes the rare feature of two island greens and, resting in a prehistoric ocean bed 40 feet below sea level is the Greg Norman Course, his only design in the Coachella Valley.

“There’s no question we’re in a golf destination,” says Lon Grundy, who came on board in January 2013, as director of golf at La Quinta Resort and PGA West. “With PGA West being such a strong brand, if you’re coming to the desert to play golf, we’re going to capture at least one or two of those rounds.”

If Capra were still alive, he’d be the first to declare life is wonderful indeed at La Quinta Resort & Spa.

For a look at what to do nearby La Quinta Resort & Spa, visit visitgreaterpalmsprings.com