Classic CourseFall 2019
Home›Classic Course›Outstanding in Ojai: Soule Park GC is Finally Living Up to Its Potential

Outstanding in Ojai: Soule Park GC is Finally Living Up to Its Potential

To most Southern Californians, Ojai is a bucolic, Ventura County town best known for its artsy-craftsy locals, its modern classical music festival and for being the former retreat of mystic philosopher Jiddu Krishnamurti. “If I had nowhere to go in the world,” Krishnamurti once said, “I would come to Ojai and sit under an orange tree. It would shade me from the sun, and I could live on the fruit.”

Not only was the late guru an annual visitor to Ojai, he was also a scratch golfer in his youth, and might well have stopped at nearby Soule Park GC on occasion. Truth be told, chances are better that he played at Ojai’s other notable course, the 1923 George C. Thomas Jr. and Billy Bell–designed layout at the venerable Ojai Valley Inn just down the road.

The Inn itself was a well-known redoubt for deep-pocketed Hollywood swells with a penchant for spa treatments and clean air. Unfortunately, the local hoi polloi had nowhere to golf until 1962, when Billy Bell’s son, William F. Bell (whose name graces many of L.A.’s municipal courses, as well as San Diego’s Torrey Pines), finished work on Soule Park. Its original mission was clearly stated: “The best means of combating juvenile delinquency is to provide constructive physical activities for young people. Golf provides a wholesome type of clean outdoor sport.”

FOR THE GOOD OF THE PEOPLE

The man whose surname adorns the club, Cyprus E. Soule, purchased 310 Ojai Valley acres back in 1873, and surely would have been pleased by the future philanthropy of his progeny — especially his daughter Zaidee — who passed up numerous offers to subdivide and sell the ranch over the years. 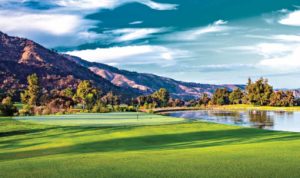 In February 1959 the family generously offered the land to Ventura County to be used as a park and golf course. “Zaidee wanted it to go to where the most people could enjoy themselves,” was how a local grocery store owner, Doug Jordan, remembered the gift. “She was much beloved in Ojai.”

Now, we’re not exactly sure how many souls (pun intended) were saved from perdition (Elvis-worship, hot rods and sex) by the newly built 18 holes, but it certainly became a reasonably priced haven for Ojai Valley golfers for decades until a fateful day in January 2005, when a perfectly devastating storm wreaked havoc on the county. Bridges and irrigation lines were washed away at Soule Park, and a creek that was dry nine months out of the year was all of a sudden 100 yards wide and 15 feet deep!

As it turns out, that once-in-a-century storm was a godsend of sorts, as county officials decided it was high time to make major improvements to the course. A new irrigation system was installed; all greens, bunkers and tee boxes were replaced. It was a long, slow process that drove away not only golfers, but even the management company overseeing the reclamation effort. Which is when another, more benevolent lightning bolt struck.

Enter an eager new management team — Highlands Golf — who had the foresight to bring in what would soon become one of the game’s most noted architectural firms: Hanse Golf Course Design. Gil Hanse (with partner Jim Wagner) is the best-known disciple of minimalist master Tom Doak, and had far more time on his hands in 2005. (Not so anymore; his arresting work at central Florida’s Streamsong Black and Scotland’s Castle Stuart Golf Links led to his selection as designer of the Olympic Golf Course in Rio de Janeiro for the 2016 Games.) 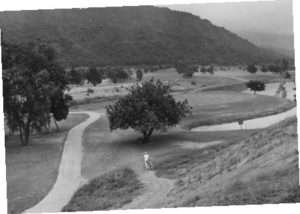 Craig Price of Highlands Golf — who also managed Rustic Canyon, another municipal Hanse & Wagner gem in nearby Moorpark — assured the county that he could have the course up and running for a mere $3.2 million. The design team moved very little dirt, reshaped the bunkers and greens and gently tweaked some of the routing.

But therein lay an unseen rub. By the time Hanse was finished in 2007, some of the local stalwarts were less than pleased by the “improvements” wrought at their eminently playable course. New bunkers were the villains, they said, especially a center-line pot on the par-4 13th and a new cross-bunker on the par-5 11th. Hanse and Wagner thought the seniors were playing from too far back, but Price finally gave in to the locals and grassed over much of the controversial work.

Hanse and Wagner were disappointed that their considered efforts had been compromised, but finally shrugged their shoulders and moved on. “I think it was just so different,” Hanse said in an interview with The Fried Egg’s Garrett Morrison. “People have a hard time embracing change, especially if they have a comfort level with something. It’s hard to get some people to accept that it could be better.”

UBIQUITOUS KIKUYU GRASS AND SUBTLY UNDULATING PUTTING SURFACES ADD UP TO A TOUGH-BUT-FAIR TEST. PLUS, THE VIEWS OF THE ADJACENT MOUNTAINS AND SERENE VALLEY AMBIANCE MAKE FOR A MEMORABLE OUTDOOR EXPERIENCE.

Meanwhile, Price was growing weary of all the incessant griping, and left Soule Park six years into his 10-year lease agreement. The course was briefly managed by Tom and Debbie York — who had little experience in the golf biz — under whose reign course conditions deteriorated. By late 2016, the county was desperately looking for fresh blood to bring the venerable track back to its former glory. 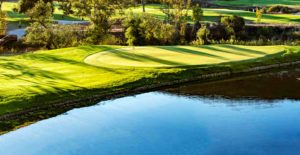 Which is when a minor miracle occurred: a former American Golf Corporation executive, Keith Brown, was looking for a challenge. “I’ve seen a lot of difficult situations,” he said, “but Soule Park was really in terrible shape physically when I arrived. I was kind of astounded they’d let it get that bad.”

For the first two years of his 20-year lease, Brown removed a number of dying or dead trees, repaired the unreliable irrigation system and started to grow turf where parched brown earth had mottled the once-healthy fairways and surrounds. “At first, even I couldn’t tell how great the course could be, it was that distressed,” he said.

In addition to improvements to greens, bunkers and fairways, Brown also loosened up the uptight, old-school culture that had come to prevail at Soule Park. “There were signs all over the property that made a visit to the course punitive without even taking a swing!” he laughed. “Don’t do this or that, wear proper golf attire — it was just a very negative environment from stem to stern. This is a golf course, not a prison camp!”

Down came the scolding signs and even the dress code (“If you like T-shirts, play in a T-shirt,” Brown said), and up went the number of annual rounds played. The par 72-course now measures 6,830 yards from the back tees and has recently played host to numerous tournaments, including SCGA qualifiers. Ubiquitous kikuyu grass and subtly undulating putting surfaces add up to a tough-but-fair test. Plus, views of the adjacent mountains and serene valley ambiance make for a memorable outdoor experience.

The even better news? Green fees are not just reasonable at Soule Park, they are a downright steal. For 30 bucks or so, you can play a course that isn’t just a classic, it has been updated by the game’s best minds and is finally ready for its close-up.

The Soule family can rest easy. Business is up and juvenile delinquency is down. Who said happy endings were only made in Hollywood?