Travel
Home›Travel›Par for Paradise: Hawaii Stay-and-Play Options for all Budgets

Par for Paradise: Hawaii Stay-and-Play Options for all Budgets

From anywhere in Southern California, getting to Hawaii is easy. Frequent flights on many airlines can land you pretty much anywhere in paradise in a matter of hours. The question is, with so many delightful options, which should you choose? As regular Hawaii-philes know, there is no right or wrong answer to that question. There are tried-and-true destinations on every main island, from Kauai to Hawaii Island. Following are three that we highly recommend for golf, accommodations and off-course amenities, in three budget ranges. As we say in the islands, Hawaii no ka oi! (Hawaii is the best!) 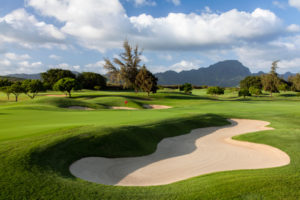 Visitors love Kauai for its lush, tropical look and feel, and those who golf are impressed by the bounty of excellent courses found on her shores. Ringing the island from north to south like a string of South Sea pearls are Princeville, Kauai Lagoons and Poipu. Mixed among these resort gems are several daily fee facilities that are well worth playing, making Kauai a true golfer’s paradise.

Poipu — on the south shore of Kauai — not only dishes up really good golf, but offers some of the best beaches, shopping and dining on the island. The premiere property in Poipu is the Grand Hyatt Kauai Resort & Spa and its affiliated golf course, Poipu Bay Golf Course. Set on 210 acres of dramatic headlands above the Pacific, with several holes playing right along the cliff’s edge, Poipu Bay Golf Course is where the PGA Grand Slam of Golf was played from 1994 to 2006. Greg Norman won the inaugural Major-winners-only event in 1994, and his successor as number one player in the world, Tiger Woods, dominated from 1998 through 2002, winning five consecutive times. Phil Mickelson set the course record with a remarkable 13-under-par 59 on the final day of play in 2004.

This Robert Trent Jones II-designed track ranks among Hawaii’s most beautiful, although it can also rank among the Aloha State’s toughest when the wind is blowing off the Pacific. No. 15 is one of the most stunning holes you’ll ever encounter. A 477-yard par-four, the tee box is situated on an elevated bluff with a steep cliff plummeting down to the Pacific Ocean on the left. Your tee shot typically plays downwind to a wide fairway. Favoring the right side (as the ocean is on the left) a decent drive leaves players a mid-iron approach to the green that is backdropped by the Hyatt and a sweeping view of the cliffs and water. 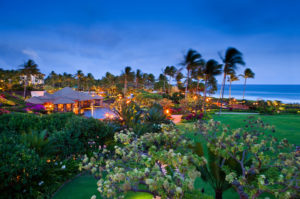 Players also encounter a number of significant historical sites that are protected and maintained by Poipu Bay staff, including several ancient Hawaiian heiau (places of worship) and handmade stone walls that are estimated to date back over 500 years.

The Grand Hyatt Kauai likewise is situated oceanfront, with many of its 602 rooms and suites sporting ocean views. Meandering pools wind through the beautifully landscaped property, with separate areas for kids to play on water slides or adults to get some quiet time. An acclaimed Anara Spa can provide a respite from all the fun, while also soothing golf-weary muscles and offering a whole menu of treatments for men and women.

Six restaurants and lounges range from Tidepools (skillfully prepared fish and other locally sourced foods) to Dondero’s (Italian cuisine). After dinner, make a point of repairing to Stevenson’s Library (named after Robert Louis Stevenson) where cocktails, billiards and music can make an evening extremely enjoyable.

Poipu Bay Golf Course is worth multiple rounds, but if you’re in the mood to venture off property, a couple of miles up the road in Poipu is Kiahuna Golf Club, another Robert Trent Jones II-designed gem that accepts daily fee play. 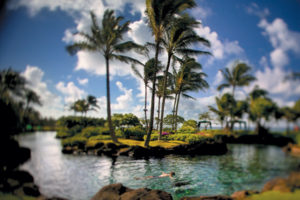 Face it, there’s no way you’re going to Hawaii without the better half and the kids. That being the case, head to Waikoloa Beach Resort, on the Kohala Coast of Hawaii Island, where two golf courses are complimented by loads of family friendly activities. You’ll get all the details you’d need from liveyouraloha.com. From swimming with dolphins to stand-up paddle boarding; from culturally enlightening walks through petroglyph fields to shopping for the latest in resort chic fashions, Waikoloa Beach Resort has it all.

The two courses — one each by Robert Trent Jones II (Beach Course) and Tom Weiskopf/Jay Moorish (Kings’ Course) — play through the black lava fields so typical of the Kohala Coast. It is much the same landscape that makes up the other championship courses along this fabled stretch: Hualalai, Mauna Lani and Mauna Kea.

From the white tees, Kings’ is an enjoyable resort course; although better players will enjoy the 7,074-yard black tees, where angles of play are more severe and sheer length provides plenty of challenge. And then there are the ever-present trade winds that are so typical of Hawaii golf.

Hole 5 on the Kings’ Course is a risk-reward par-four, and Weiskopf’s tip of the hat to the great short par-fours in golf. It plays only 287 yards from the white tees and from the yardage alone you might think it’s an easy birdie hole…but you’d be wrong. A Mojave-sized bunker occupies the entire left side of the hole between tee and green, and in it are space shuttle-sized lava rocks, requiring a 250-yard carry. Mis-hits frequently land behind the lava rocks and then chipping out sideways is the only option. The safe play is an iron up the right side and a sand wedge to the elevated putting surface.

The Beach Course, meanwhile, winds its way past historic petroglyph (Hawaiian rock carvings) fields, and through dramatic lava formations before emerging at the signature oceanfront 7th hole. The 7th green sits on a lava peninsula, framed by a curve of swaying coconut palms, while waves crash on the rocks below sending sea spray billowing into the air. In whale season, it’s not uncommon to spot the spouts and splashes of the humpbacks as they breech and slap the surface as they pass just offshore.

At just more than 6,500 yards from the back tees, the Beach Course is a fun and scenic round of golf for all players.

The Hilton Waikoloa Village is as family friendly a resort as you’ll find. It’s situated on 62 acres, with 1,500 rooms and suites. From the lobby, guests board a monorail or water taxi to get to their rooms. Swimming pools and water sports are the name of the game here, and hotel guests can also sign up for a dolphin experience, a certain-to-please family favorite that allows you to get in the water and experience the playful mammals up close and personal.

FUN IN THE MAUI SUN 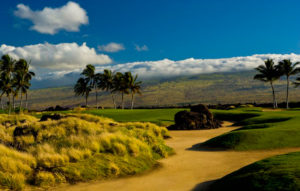 Kaanapali was the first planned resort destination in Hawaii. When it opened back in the early 1960s, it was the place to go on Maui. Over the ensuing decades, newer and more high-profile destinations sprung up throughout the state, but Kaanapali has retained its appeal, in no small part to the wide, three-mile stretch of white-sand beach that is regularly touted as one of the best beaches in America. Today, Kaanapali is one of the most active, most affordable resort areas in the Aloha State.

The Outrigger Maui Eldorado is also a great home base for playing lots of golf, and Kaanapali offers 36 holes that are so fun they make you want to come back day after day for more. Celebrating 50 years in 2012, the Royal Kaanapali Course is a classic Robert Trent Jones Sr. design that combines wide fairways with large, undulating greens. With over 45 years of tournament history, including the Champions Skins Game, Royal Kaanapali has tested the skills of some of golf’s greatest legends, including Arnold Palmer, Jack Nicklaus, Tom Watson and Amy Alcott. With its fifth hole that plays right down to the Pacific spray, Royal Kaanapali is a scenic and very pleasurable layout, while also requiring accuracy to score.

Its sister course, Kaanapali Kai, was originally opened as an executive course, but expanded by renowned architect Arthur Jack Snyder in 1976, who designed several courses in the islands in those days. Today it plays to par 70 and just over 6,800 yards, making it the perfect experience for families and higher handicappers. 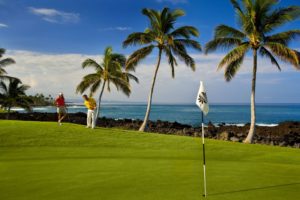 If you are a regular viewer of the Golf Channel, you might recall that Big Break Ka’anapali was played on this layout. As the contestants on that show discovered, this layout will test your course management skills, particularly around the putting surfaces. Newly renovated, Kaanapali Kai places a premium on accuracy off the tee and a deft touch around the greens.

In addition to its 36 holes of fun golf, what travelers find appealing about Kaanapali Resort are the many festivals, events, restaurants and shops to go along with beach and ocean sports. After golf, standup paddle-boarding, snorkeling, kayaking or whale-watching, head to Whalers Village. Here you will find several restaurants, including the popular beachside Hula Grill, and dozens of shops carrying everything from resort wear to Hawaiiana. Annual festivals include Kaanapali Fresh, a summer event that highlights Maui’s creative chefs and grown-on-Maui products.

If you’re looking for additional Maui courses on which to test your game, from Kaanapali it’s an easy 15-minute drive up the highway to Kapalua, where the PGA TOUR’s Hyundai Tournament of Champions is played on the Plantation Course.