Over the past three decades, the definition of Studying a Line has taken on new meaning in Colombia.

Known by many, if not most in the States as the setting for the Netflix series Narcos — depicting drug kingpin Pablo Escobar’s late 1980s’ rise-and-fall as leader of the multi-billion dollar Medellin cocaine cartel – the proud nation has worked (and invested) to establish a refreshed tourism rep as the warm, colorful and open-armed Caribbean gateway to South America.

Though the popularity of the show (“The Hollywood Reporter” polled Narcos as a top-five Netflix ‘binge watch’ in 2018) and a macabre-curiosity of Escobar have undoubtedly aided the tourism rise, proud locals are ever-aiming to crest the shadow of Colombia’s not-too-distant past.

In Cartagena, Colombia, perched on the country’s northeast corner along the Caribbean Sea, a graduation from terror and drugs to tourism and clubs has seen the city ascend to a growing golf and getaway destination. 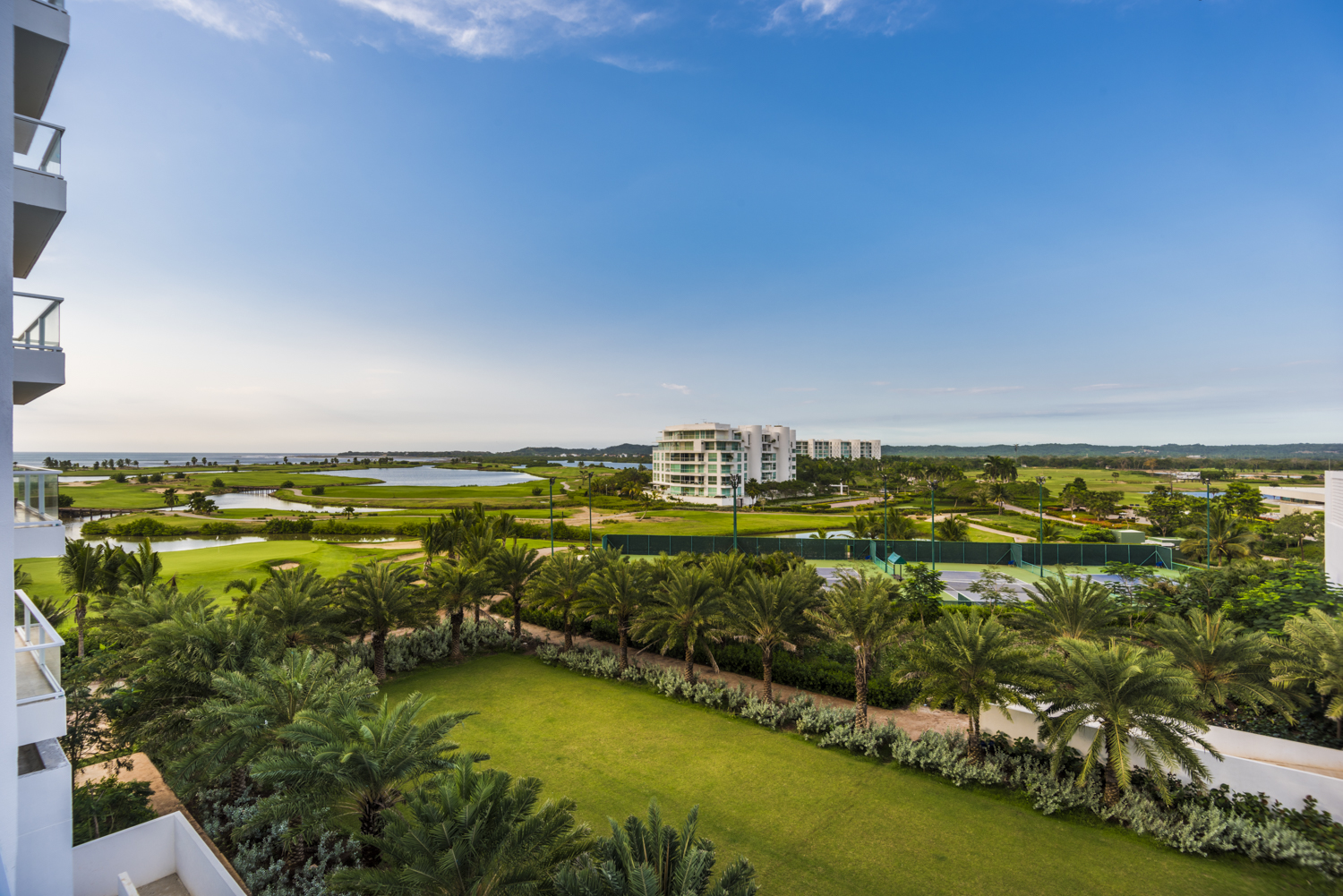 From L.A., a five-plus hour flight takes the visitor to Panama City before a 45-minute hop across borders gets you to Cartagena. Proximity to the equator and seaside setting translate to some serious humidity and rain across portions of the city’s seasons, which finds the temperate months of January – April as prime time for a visit.

Debuted in 2012, the TPC Cartagena at Karibana from Nicklaus Design plays as the continent’s lone course in the popular TPC network. One of just 50 courses in the country, the track annually charts as one of Colombia’s top two plays, the vast wealth of which are private clubs.

As the nation further widens its tourism gates, however, there’s more golf to come. Host to Web.com Tour events in 2015 and 2016, the course’s most formidable boost in visitors and visibility came with the opening of the Hilton-brand, high-end Conrad Cartagena in late 2017.

Situated adjacent to the course, golf guests can easily stroll from room to clubhouse.

Yet, even amid the amply-patrolled, idyllic setting, native hosts work daily to escape the pall of the past. As Sly Stallone offered in Rocky: “They don’t remember you, they remember the rep.”

“Yes, Narcos, that’s our curse, and that’s probably not ever going to change,” says Juan Felipe Raigoza, director of golf at TPC Cartagena at Karibana. “But the situation here in Colombia has changed a lot – I mean a lot. Back in the 80s’, yes, it was tough, it was violent. The cartels were dangerous. But now, those problems are gone. You walk around and hear all types of languages from all over the world; it will totally change your mind-set about our country.”

“It’s interesting that our past does seem to attract people today,” says Carlos De La Ossa, a former Colombian sportscaster. “I think for the Americans coming down here, more and more, it’s a very affordable trip. And, for tourists, we have a lot better infrastructure in Colombia to attract tourists. When I was a kid, I don’t really remember Americans coming here at all.”

From the heights of the hotel’s perspective, altering perception plays on par.

“Like most, I’ve seen Narcos. Season one, season two,” says Stephane Mercier, general manager at Conrad Cartagena. “But things have changed here for a long time, and it probably even took 10 years to realize that. Just look at the roads, the hotels, the new hospital; it’s on line with becoming an international city.”

For most, golf presently serves as a compliment to a Cartagena trip.

“There’s a mix of golf throughout the stay; it’s often integrated into the leisure of one’s visit,” Mercier says.

On the lake-laden course, such worldly flavor grows pleasantly-apparent with continued pursuit of the paspalum grounds, and the vibe of being someplace different is felt watching guys toss nets into the waters (hunting for both fish and golf balls). A noticeable, albeit comforting hint of foreign grounds is further felt by seeing security on-course, with guards simply taking shade and keeping watch on the occasional fairways forest.

While the opening, resort-style side plays with but measured-enthusiasm along man-made hazards and native vegetation, Karibana’s latter nine opens toward the oceanfront with a host of engaging holes along Nos 12-18. 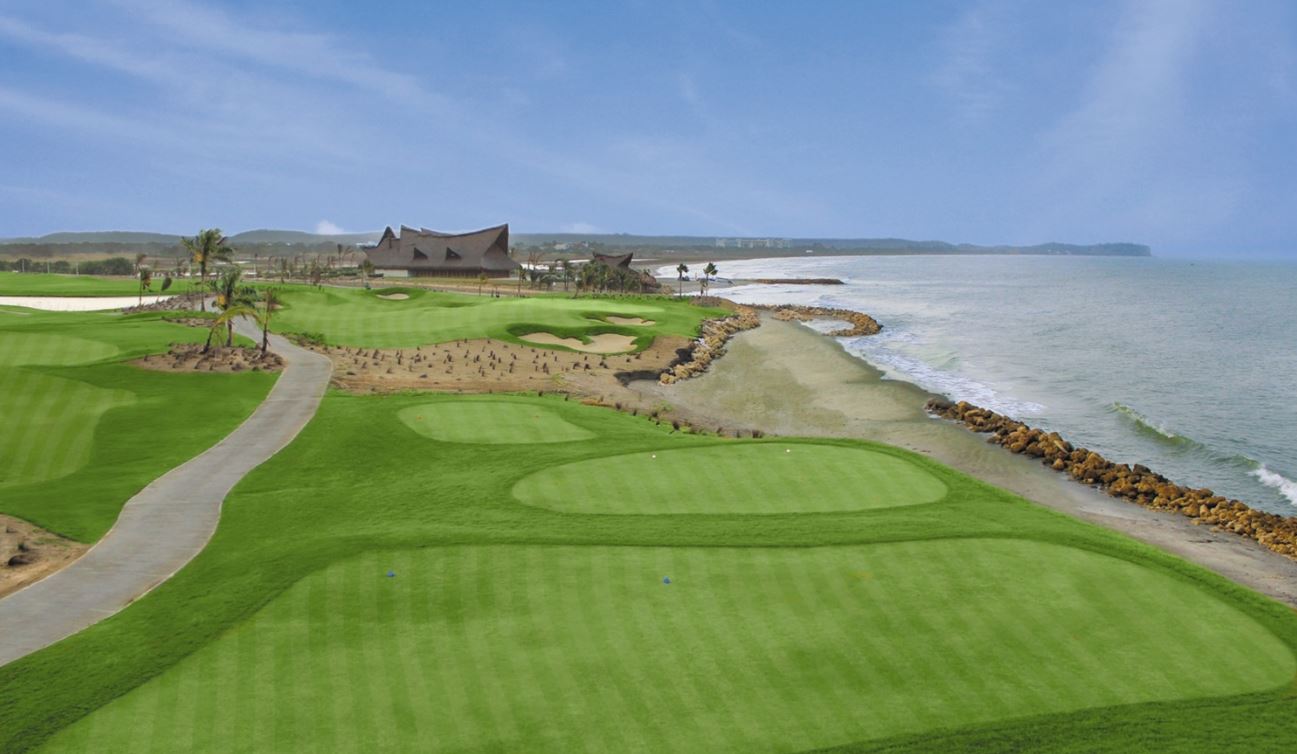 After the meaty, 473-yard par-4 12th tests with water playing both left and across the deep fairway, the ensuing par-5 13th provides further shot study with a studied second over/before the hazard. A tough, 201-yard par-3 follows before the excellent, 284-yard par-4 15th demands wise club selection for those electing to lay-up to a bunker-heavy fairway or blast for the green.
Rounding home, cameras are abundant on the stout, 525-yard par-4 16th playing right on the beachfront, with the diminutive par-3 seaside follower offering a fine chance to get a stroke back. On the strategic, par-5 finisher, risk-reward concludes play with more deep fairway drink, asking players to shape a final strike to a getable green.

In the near future, more play is on the way, with Greg Norman’s nearby Mar de Indias GC presently in development; once completed, the new course looks to create a palpable Cartagena duo for the golf traveler.

“Every year, we get more and more Americans down here, a lot of weddings, bachelor parties. Cartagena is a fun place,” smiles Raigoza. “It’s beautiful, warm, lots of food, lots of water and lots of fun. When we see a group of guys down here, well, they’ll drink, they’ll party at nightclubs and then they’ll get in a round here.”

A New Brick in The Wall

While both the Web.com and PGA Tour Latinoamerica have enhanced interest and participation in the South American game, it’s the pairing of history old and new which fills a Colombian scorecard in full.

A short ride from the Conrad takes visitors to Cartagena’s famed “Walled City,” where buoyant sights, colors and flavors mesh nearly 500 years of the nation’s story.

From the resort, the brief journey itself represents the city’s progress; what once took an hour to drive is now traversed in under 20-minutes, compliments of fresh roadwork. 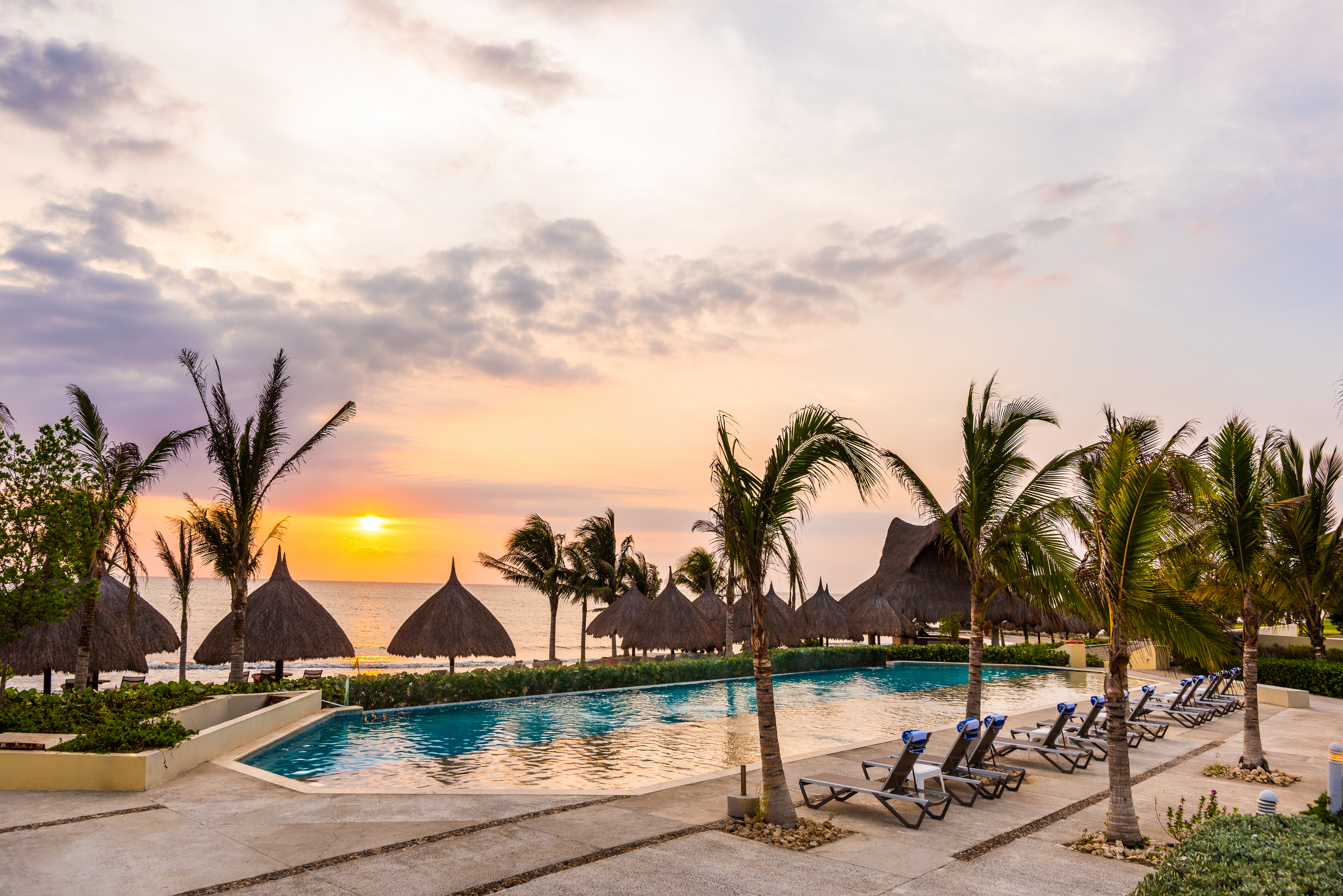 “For somebody like me, being born here in Cartagena, to be able to see the difference of where we are now, from the road construction to all the new hotels big and small, it’s amazing. Even for me, somebody who lives here, I see all these new things opening all the time.”

Bricked across nearly nine miles in circumference, the Walled City (some call it the “Old City”) dates to the 16th century and was built by the conquering Spanish as fortification to ward off French and British pirates (Sir Francis Drake among them).

Stellar seafood and native rice dishes plate Colombian flavors, while native Palenquera women in colorful dress balancing bowls of fruits atop their heads. For the culturally-curious: Door knockers provide insight into a home-owner’s vocation or brood, with a Lion representing strength or power; a Lizard representing fertility; a Fish representing a family which earned its living on the sea.

The neighborhood of Getsemani has become increasingly-popular with the art and gastronomy set; homages to favorite native son Gabriel Garcia Marquez (who lived in the Walled City) can be amply found, while the street-to-street works of modern Colombian painters represent the nation’s next generation of creatives.

The Walled City is well-worthy of full exploration, all hours of day or eve. For couples, romance is rich, and a stay at the comely Sofitel Legend Santa Clara Cartagena would make for a memorable accommodation.

For a gaggle of dudes on golf getaway or a Bachelorette, well, there’s ample opportunity to frolic into the dawn hours.

And visitors may do so sans concern: The police presence in the Walled City is ample, to say the least. Even at night, there’s no reason for concern – at nearly every turn through the walled labyrinth, security of some sort can be found on almost every corner.

Native Catagenans have seen the changes in their own lifetimes.

“Back then, when I was a kid, no, I didn’t feel secure here at night,” Cuesta says. “It was very dark; a tough neighborhood. But that’s all changed now. Anybody can walk freely, day or night. It’s a total difference.”

In the near future, Netflix will release its fifth installment of the Narcos series.
Most Colombians won’t care. Pablo is in its past. This is a country on the come; from golf to getaways, from brick to brick, the county is breaking down walls of its past and sharing its flavor with the world.

President’s Message: The Most Impactful Thing We ...