Most major championship courses in the United States are closed-door venues, though not all of them are. You might not ever compete in a U.S. Open, U.S. Women’s Open or PGA Championship, but there’s no reason you can’t tee it up at some of the fabled playgrounds where history was made. Some of the price tags might sting, yet there’s no substitute for walking where Tiger prowled, teeing it up where Annika smacked one or sticking an approach just like Jack did. Here are five major championship tracks on the West Coast where you can make your own history. 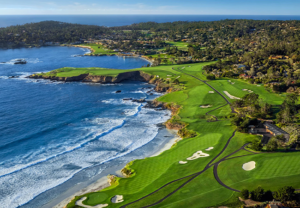 The Course: Host to the PGA Tour since 1946, Pebble Beach might be best known as a six-time U.S. Open course, where winners have included Jack Nicklaus, Tom Watson and Tiger Woods. In 2023, Pebble will host the U.S. Women’s Open for the first time. Nicklaus once told me, “I fell in love with Pebble Beach the moment I set foot there to prepare for the 1961 U.S. Amateur.”

It’s easy to see why Jack felt that way. No seaside course in the world delivers what Pebble Beach does, from the cliff-top setting above the Pacific Ocean to the tiny greens that place a premium on shotmaking. There isn’t a more thrilling, spectacular stretch that exists anywhere than Nos. 6 through 10, and the par-5 18th stands alone as the premier finishing hole in golf.

Major Moments: The 209-yard, par-3 17th shines brightest in Pebble’s U.S. Open lore. In 1972, with the flag placed on the left side of the hourglass-shaped green, Jack Nicklaus struck a masterly 1-iron that clanked the flagstick, leaving him with a tournament-clinching, kick-in birdie. Ten years later, Tom Watson hit a shot for the ages, a sand wedge from thick greenside rough for a chip-in birdie to cement his Open victory. In 2019, Gary Woodland was forced to hit a wedge from the front-right portion of the putting surface to reach the back-left, where the hole was cut. From 91 feet, 3 inches, he lofted his 64-degree sand wedge to 2 feet, 2 inches. Yet another shot for the ages at Pebble’s 17th.

Booking It: You don’t need to stay at a Pebble Beach Resorts property to play their namesake trophy course, though it’s strongly advised. Guests can book 18 months out, subject to minimum stay requirements; the general public can try 24 hours in advance. 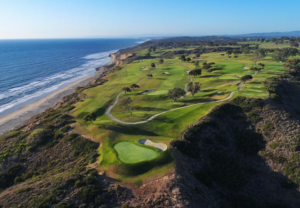 The Course: Bring your muscles and your ‘A’ game to Torrey Pines’ brawny South course. In 2001, Rees Jones renovated this 1957 William F. Bell-designed, cliff-top muni, stretching it to a strength-sapping 7,800 yards. The most spectacular holes, the 201-yard, par-three third and the 490- yard, par-4 fourth, peer down at the Pacific, though the toughest tests tangle with scrub-choked canyons throughout the back nine.

Major Moments: The 570-yard, par-5 18th has witnessed the most serious drama in Torrey’s two U.S. Opens. In 2008, Tiger Woods came to the final hole needing a difficult 12-foot putt to tie Rocco Mediate. Down went the putt, up went Tiger’s fist! At the time, no one knew Tiger was competing with a broken leg and a torn ACL.

The 18-hole playoff was anything but anticlimactic. From three shots down with eight holes to play, Mediate pulled ahead by 1 after 17 holes. Time for another Tiger roar. Smashed drive at 18, soaring 4-iron over a lake, two-putt birdie. Sudden death. A Mediate bogey ended things on the 91st hole.

Not to be outdone in the jump-off-your-sofa conclusions, Jon Rahm ended the 2021 U.S. Open with an exclamation point, playing his greenside bunker shot at the 72nd hole away from the flag, but also away from serious trouble. From there, he faced an 18-foot, hard-curving, left-to-right putt — which he drained to claim his first major championship win.

Booking It: Walk-ons are welcome, but most visitors prefer the security of a guaranteed tee time. The City of San Diego offers a Torrey Pines online reservation system. Register and you can book up to 90 days in advance, with surcharges tacked on for the early booking. Local hotels, such as the adjacent Lodge at Torrey Pines and the Hilton La Jolla Torrey Pines, offer exclusive packages. 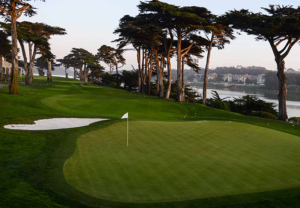 The Course: Situated in the heart of San Francisco, in sight of the vaunted Olympic Club, this venerable 1925 muni sports fairways hemmed in by frequent fog and cypress trees, lush rough and a wild closer. The 475-yard, par-4 18th (which played as the 15th hole in the 2009 Presidents Cup) opens with a bite-off-as-much-as-you-can-chew drive over a lake, followed by an uphill smash to a rollicking three-tier green.

Major Moment: The sole major championship contested in the 2019-2020 season evolved into one for the ages, thanks to a stellar leaderboard and one of the most memorable shots in PGA Championship history. Amid the marine layer chill, 23-year-old Collin Morikawa, who played college golf nearby at UC Berkeley, broke the logjam of leaders on the 70th hole with the shot of the year. Morikawa rocketed a low, perfectly fading driver that scurried onto the 16th green, eight feet from the cup on this 300-yard par 4. When he rolled in the eagle putt, the 2020 PGA Championship had the unforgettable moment it deserved.

Booking It: Tee times are available 90 days in advance. 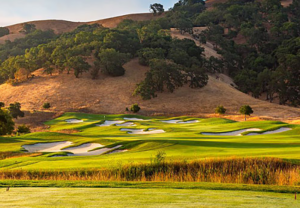 The Course: A 30-minute drive south of San Jose puts you at CordeValle, four times host to the PGA Tour from 2010-2013 and home
to the 2016 U.S. Women’s Open. Opened in 1999 and originally intended for Silicon Valley executives, it transformed itself into a resort course, albeit a tough one, at 7,368 yards.

Liberally dotted with oak and sycamore trees that contrast nicely with the straw-colored hills in the background, the course features ravines and streams crossing the fairways, artfully sculpted bunkers, fast greens and views of the adjacent Clos LaChance vineyards.

Major Moment: Brittany Lang edged Anna Nordqvist of Sweden in a dramatic playoff to win the 2016 U.S. Women’s Open, after Nordqvist was penalized on the par-4 17th hole for touching a grain of sand in a fairway bunker with her club before impact. Controversially, no one actually saw it happen, except high-definition television cameras.

Booking It: You must be a resort guest to access the golf course. That said, the 45-room, luxury boutique resort excels in every way, from dining to accommodations to service. 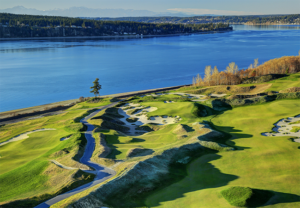 The Course: Now 15 years old, this walking-only, links-like, Robert Trent Jones II design was carved from a commercial sand and gravel quarry 45 minutes south of Seattle. It is a challenging walk, thanks to 200 feet of elevation change, which comes into play twice on the front nine and once on the back. The soothing salve is the striking scenery, with Puget Sound and the snow-capped Olympic Mountains frequent companions throughout the round. Though the course can play up to 7,600 yards, steep slopes and wide, firm, fast-running fairways help to send the ball racing great distances. In most cases, the proper approach shot will bounce and roll onto the greens.

Major Moment: Two days after he called No. 18 at Chambers Bay “dumb,” Jordan Spieth clinched his first U.S. Open win there in 2015. The hole, which plays alongside 40-foot-tall concrete structures that in a former life were sorting bins for the gravel operation, alternated that week as a par-4 and a par-5. On Friday, Spieth double-bogeyed the hole as a par-4, but on Sunday when the hole was playing as a par-5, he smashed a 3-wood 285 yards to 20 feet, and two-putted for birdie. Moments later, Dustin Johnson, needing birdie to tie Spieth, planted a 5-iron to 12 feet — then shockingly three-putted for par, handing Spieth the U.S. Open trophy.

Booking It: Tee times are available 90 days in advance.

Golden Golf: Till Death Do Us Part