Sam Rocha will never forget her first trip to the Occidental College campus. It was a day that changed her life forever, and opened her eyes to new possibilities. The then-high school sophomore, participating on an educational outing with SCGA Junior (formerly SCGA Youth on Course), had no clue she was stepping foot on her future college campus. But now that she’s just weeks away from beginning classes at the small, liberal arts school in Eagle Rock, Calif., the full circle moment is one that’s almost complete.

“Being able to go to the campus that day, meet with the golf team, it was life changing for me,” said Rocha. “I had never seen an environment like that before. That following summer, I realized that I had a chance to make that my reality.”

SCGA Junior gives kids who are part of its club the opportunity to participate in a variety of educational outings throughout the year, including a yearly trip to Occidental. Andrew Larkin, head coach of both the men’s and women’s golf teams at Oxy, has worked closely with SCGA Junior to ensure that his program remains involved in this unique experience.

“It’s so important for us to be involved in the community,” said Larkin. “The community has been great to us, letting us have places to play and giving our players internships and getting them involved in different aspects of the golf industry. Allowing people to learn about our golf program, college golf as a whole, it helps everyone, and if every couple of years we can pick up a player like Sam out of it, that’s just frosting on the cake.”

For Rocha, the realization that she was talented enough to play college golf was a process. First getting involved in the game through the Tiger Woods Learning Center, Rocha didn’t fall in love with the game right away. In fact, she didn’t care for it much at all.

“I honestly didn’t like it,” she said. “But my dad sort of threw me into it, made me play, and I learned to like it. I started getting better and better and then I really learned to love it.” 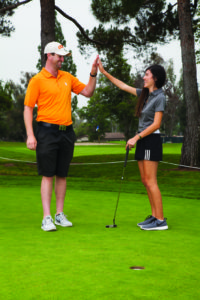 The promising future of Sam Rocha

With a new goal of playing golf in college and the memory of her day at Oxy fresh in her mind, Rocha reached back out to Larkin, inquiring about the opportunity to play golf in his program.

“We’re looking for players who can play at a high level, but also someone who is a strong leader. That’s something I saw in Sam right away,” Larkin said.

The motivation for Rocha to be a leader came at a relatively young age. Playing on the Cerritos High School golf team, she was left out of an event her freshman year that only the top players were allowed to participate in.

“That motivated me to practice and stay on track,” said Rocha, who was team captain both her junior and senior seasons. “It made me want to lead the team and get others to stay on track as well. I’ve seen girls on my team quit golf and go down the wrong path. I want to be a role model.”

Without a swing coach, Rocha’s golf game improvement really came from within. She’d use the internet to learn swing tips and committed to practice on a regular basis. The SCGA Junior Golf Pass she’d use at Heartwell GC and Lakewood CC provided an affordable option to better her game.

“Four years ago, I became more involved with SCGA Junior, not just using the Golf Pass but also taking advantage of outings and programs. SCGA Junior is involved in aspects of my golf game, but also grades and community service. The focus is not all on golf. They showed me there are other things that are important.”

That understanding and commitment to golf and school will come in handy at Oxy, a school with a reputation for a rigorous academic workload. With Rocha deciding to play golf at a Division III school, she first needed to get into Oxy on her own merit, which she did through the early decision process.

“I know the golf is going to be challenging, and it will be tough academically, but I feel like I can do it,” said Rocha, who plans to major in biology. “I know that if I’m studying something like bio that I’m interested in, I’ll stay on track and enjoy it.”

And she’ll have Larkin and the rest of the golf team as a support system.

“One of the biggest differences between Division I and Division III in collegiate athletics is that golf doesn’t have to be the only focus,” said Larkin. “We want our athletes to have the full college experience and be able to major in something like biology and have internships and join sororities.”

The dorm life, golf, academics are all things Rocha is looking forward to this year, as well as a scheduled team trip to Hawaii.

“It’ll be my first time on a plane!” said Rocha.

Also in her corner as a support system will continue to be SCGA Junior, which is providing financial assistance for her college experience. Earlier this year, Rocha’s involvement with SCGA Junior led to her being selected as one of 37 SCGA Junior Scholars.

“To be an SCGA Scholar, you have to follow up with them with your grades and continue to do community service,” said Rocha. “I think that will help keep me accountable, and I’m so thankful for that opportunity.”