John Ashworth is cool personified. Pushing beyond his mid-50s, his hair and his whiskers having gone gray, adding a ruggedness to his good looks, yet he is still fit enough and so casually fashionable that he could easily be a Men’s Journal cover model. He looks like he’d be happily at home climbing Half Dome in Yosemite.

Ashworth is the guy who knew so much about what it is to be cool that he convinced maybe the coolest golfer of all time, Fred Couples, to wear his golf shirts with the “Walking Man” logo when most of the guys on the tour in the 1980s dressed like dweebs. 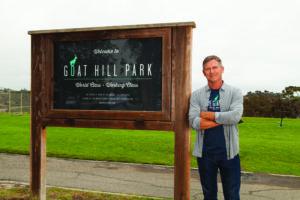 Ashworth made a life, a job — and a fortune — by being cool.

But at this moment he is standing at the top of a hill, on the east side of Interstate 5 in Oceanside, overlooking a brown driving range. It looks anything but cool, though the surfboards stuck into the ground to designate yardage points are a nice touch.

This is Goat Hill Park, a rugged and ragged-around-the-edges executive course that is 63 years old and has been Ashworth’s second home for the better part of a year since he formed a group to take over the lease when the course was virtually on life support.

So what’s a cool guy doing in a place like this?

“It was the perfect storm,” he said. “I’m from the area. I’ve been in the golf business and it’s been really good to me. I’ve seen the courses I grew up on — Escondido CC and San Luis Rey Downs — they’re gone. When that was happening here, I couldn’t turn my back on it.

SMALL IS THE NEW BIG

Improbably, because of Ashworth and others whose hearts for golf are far bigger than the doubts that might creep into their brains, there has been a rebirth of small courses in San Diego’s North County. Only three miles east of Goat Hill is the Emerald Isle GC, another executive track that also was in terrible shape until two couples consisting of four PGA teaching pros — Don and Nikki Gatch and John and Holly Kennedy — took over in December with their own dreams of providing quality, affordable golf while growing the game at the true grassroots level.

Throw in a $1 million course renovation and a popular new restaurant added at the St. Mark Executive Course, another 15 miles inland in San Marcos, and there might not be another cluster of facilities in the United States working to make short-course play so appealing to the masses.

“Everybody is complaining about what’s wrong with golf … blah, blah, blah,” Ashworth said. “You can dissect it and I’m sure it’s a lot of different things. For me, there’s not enough attention to the community in golf. Public golf courses should be at the center of a community.

“I came from public golf, grew up playing that way. If kids don’t have an opportunity to play, then that’s what’s wrong with golf. Plus, people get a lot of joy by coming to a golf course. They can unplug from the rat race for a couple of hours of fun.”

Ashworth was first bitten by his devotion to “The Goat” when he was still a prep golfer at Orange Glen High School in Escondido (he’d go on to play at the University of Arizona). It was then officially known as Center City GC, but the regulars called it “Goat Hill” because walkers had to chug up and down its rollercoaster slopes. 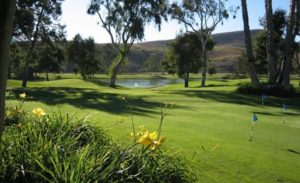 With a par of 66 and many of the longer holes defined by topsy-turvy fairways, Goat Hill was arguably the toughest executive layout in San Diego. The leaseholder for more than 20 years was Ludwig Keehn, who cared for it like his own child until the day he died in 2004. After Keehn’s passing, Goat Hill fell into disrepair, and the most recent leaseholders before Ashworth all but abandoned it. That’s when Ashworth convinced a group of friends in the golf business to help him step in.

Among those were Dave Emerick, the director of the North County Junior Golf Association, and Susan Roll, the owner of the Carlsbad Golf Center and a former PGA National Merchandiser of the Year. In the time since they took over the lease, the small pro shop has been renovated, a patio added, new carts brought in and the greens revived to roll as true as most in the county.

Large sections of the course are being left to go dry because of a turf replacement project being funded by Metropolitan Water District rebates. The project will include adding forward tees and softening some of the Goat’s more difficult fairway slopes.

Ashworth, who sold his stake in Ashworth Golf years ago, has a clothing company now, Linksoul, that he believes embodies his desire to “reconnect people to the soul of the game.” He speaks and thinks like a dreamer, an artist. Among his brilliant ideas: “Save the Goat” T-shirts that have been worn by, among other celebs and players, Bill Murray, Mark Wahlberg, Adam Scott and Geoff Ogilvy.

“John has this vision and this love, and he completely and utterly cares about others,” Roll said. “It has nothing to do with him at all. It’s all about the community and having a course for the public.”

The course’s tag line in its logo is, “World Class, Working Class.” It lives by that. Jeans and T-shirts are standard attire here. There is disc golf play — “It’s the Augusta National of disc golf,” Ashworth boasts — and dogs are allowed on leashes. Ashworth would like to hold bike races here someday and concerts on the amphitheater driving range. He has said he will build a six-hole kids course and a playground next to it.

So much has been accomplished, yet Ashworth compares the upcoming journey to a mountain climb.

Emerald Isle’s history is not all that different from Goat Hill. It is a challenging, par-56 layout with a bucolic pond as its centerpiece. It was opened, with Jack Benny doing the ribbon-cutting, in 1966 as part of a nearby housing development. 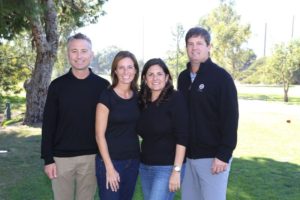 In recent years, the previous leaseholder cut off much of the watering and let the course burn out. The clubhouse was shabby and the carts decrepit. Enter the Gatches and Kennedys, who had decades of combined experience in golf, but never as course operators.

“I think,” said SCGA Board Member Nikki Gatch, “at some point most PGA pros think, ‘Gosh, I wish (this course) were my own,’ to have control of your own facility. This was a great opportunity.”

The couples painted the clubhouse and refurbished the inside to be more inviting. They leased new carts and immediately grew new turf on the driving range. The have started a Saturday skins game and a women’s group has grown from a handful of golfers a week to about 20. An Emerald Isle team is playing for the first time in the PGA Junior League.

“We want all of the things that are intimidating about the game to vanish,” John Kennedy said. “That’s so much the focus of the exchanges I’m having. We want all groups of people. This is their place.”

Said Gatch, “We take it all very personally. We feel that places like Goat Hill and Emerald Isle and the shorter courses are what the game needs. We don’t want to be as intimidating as some courses, but it’s still fun for the average golfer. I think that’s what we’re all trying to achieve, and we’ll just keep plugging along.” 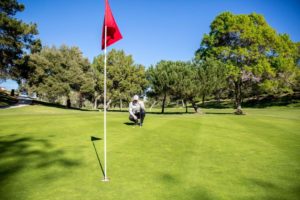 Called Tap-In Tavern, the person who takes your green fees can also serve you a beer. The restaurant is bright and airy, with access to a patio that overlooks the golf course. Inside, there’s a state-of-the-art golf simulator that can be used for warmups or contests.

Nearly $1 million of work was performed on the par-58 course, which has a particularly scenic back nine amid stands of pine trees. All of the tee boxes were leveled and redone, with decomposed granite and water-saving plants replacing grass. The work was done with a nice aesthetic touch. There will be a second phase of the turf removal project.

St. Mark once had asphalt cart paths made bumpy by tree roots and those were replaced with smooth concrete paths that make the entire experience enjoyable, and it’s a course that is easily walkable too.

Where are they now: David Hobby