About 15 years ago, Marco Gonzalez bought his two little girls — Stephanie and Natalie — sets of plastic golf clubs to go to his uk golf breaks. That humble beginning stoked a fire and passion for the game matched by their father. Though the bond they share through golf has been tested, including when Marco was diagnosed with a brain tumor, it hasn’t faltered. It’s unbreakable.

The Gonzalez family first joined SCGA Junior when Stephanie — now entering her final year at Texas A&M International University — was just 11 years old. Initially, the programming became a way for the girls to try out new courses and play locally and affordably. But quickly the family realized that their experience was going to be so much more than that.

“They were able to play private courses through Mentor Play Days, and even though playing private courses was so special, what helped them a lot was getting to play with a professional mentor,” Marco said. “The mentors became role models. It encouraged them to continue their education so that they can also be in that spot.”

And continue their education they did. Both girls are SCGA Junior Scholars and are playing golf at their respective universities. Stephanie is a multidisciplinary major with concentrations in education and kinesiology and Natalie, who is three years younger, is a studio art major at Whittier College.

There’s nobody I’d rather play with than my two daughters. Not only do we golf, we also talk about what’s going on in our lives. My rule has always been not only am I their father, but I’m also their friend, so they can come and talk to me about anything. It’s an open door when we go golfing.

Both girls also work as coaches in the Player and Youth Development program, and as much as they help the younger generation, they both credit coaching with helping them as well.

“SCGA Junior has helped me so much financially and professionally,” Stephanie said. “I became a scholar and it helped not only myself, but my whole family. I also got my first ‘big girl job’ with SCGA Junior.”

And if you’re wondering what the qualification for a “big girl job” is, it’s filing taxes.

For Natalie, the impact has been less tangible, but no less significant.

“SCGA Junior has helped me so much socially,” Natalie said. “I was so shy and quiet when I was younger. I would keep to myself and hide behind Steph whenever we were golfing. This program has helped me come out of my comfort zone. Especially when I’m teaching little kids, where I have to talk a lot and talk with their parents.”

Natalie’s confidence has soared so much that she now plays alongside Marco in his weekly work league. Marco says that Natalie comes along to practice for her next college season, but after asking him not to cry, Natalie shared her real reasons.

“I just see it as another way to spend time with my dad,” she said. “I also like to beat his coworkers and see them get mad when I play way better than them. But really it’s just a nice getaway for us to have fun together.” 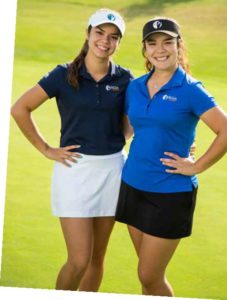 Though they were playing together long before Marco’s tumor was diagnosed, every chance to get on the course together nowadays is a special one, because there was a time when no more rounds were guaranteed.

“There’s nobody I’d rather play with than my two daughters,” Marco said. “Not only do we golf, we also talk about what’s going on in our lives. My rule has always been not only am I their father, but I’m also their friend, so they can come and talk to me about anything. It’s an open door when we go golfing.”

Looking back, Natalie, who was in just fifth grade when they found out about the diagnosis, remembers how concerned their dad was about how this would change their golf routine.

“The only thing he was worried about was not being able to play golf with us anymore,” she said. “After the surgery, he got healthy again and he was so happy that he could come out and play with us. Every time we go play now, he says, ‘This is why God kept me here, so we could keep doing this every week.’”

Back and better than ever, Marco recently celebrated his first hole-in-one 33 years after he first picked up a club. “Golf has always been very special, especially when I get to play with the girls,” he said, fighting back tears. “The biggest thing I want to give back through golf is to share the love and passion that I have for the sport with my daughters and the kids I volunteer with, and I hope that they feel the same way.”

The Gonzalez clan, including mom, Rosie, have dedicated many hours giving back to the game and organization that have so clearly shaped their lives. 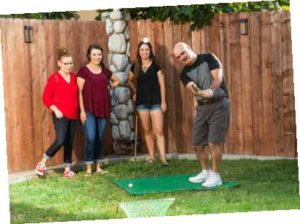 “Oh my gosh, golf and SCGA Junior have meant just about everything to us,” Rosie said. “We’re so grateful for this sport.”

Now, as their time as participants in the program begins to wane, they say that volunteering and giving back is how they can pay it forward for the next generation of junior golfers.

“I love to give back because I want other families to get the benefits and experience that we have had and continue to have,” Marco said. “Even after my kids are done being scholars, and even if they aren’t working here anymore, as long as I am able, I’ll continue to volunteer at as many events as I can.”

Even though the trio doesn’t get out on the course as frequently as they used to, the girls call their dad the hub of their golfing wheel. They still have the chipping green set up in their backyard like they did when they were kids, back when they used those plastic clubs. Marco was their first teacher. It was the beginning of their unbreakable bond.